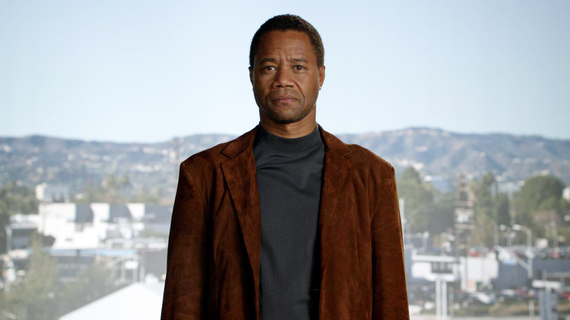 Academy Award winner, actor, writer, producer, father. Those are all words that can describe Cuba Gooding, Jr. But by his own admission, never had he imagined ever playing the role of O.J. Simpson. In what he describes as a role that impacted him more than any other, Gooding takes on the controversial sports great at a point in his own career when he is going through his own metamorphosis.

I had an opportunity to talk with Gooding about shooting The People v. O.J. Simpson: American Crime Story, an FX limited series, based on the book The Run of His Life: The People v. O.J. Simpson by Jeffrey Toobin. We also discussed his journey as an actor, what really happens behind the scenes with how roles are won and his thoughts about the conversation around diversity in the film industry.

What did you do to prepare for the role of O.J.?
It's funny because normally, when you have a film role, you do your prep and then you step into the character; but with this one it seemed like every day there was new source material, there were new videos to watch.

With Jerry Maguire and my character Rod Tidwell, I had already researched a role of a flamboyant player in the NFL. I knew how these guys get these larger than life personalities. They are coddled, surrounded by a support system that enables their egos to grow. So, I took that mentality into the role. Here's a guy who won the Heisman Trophy in college and went on to break records in the NFL, became an international movie star, with the Naked Gun series and what not. This was a guy whose life was in a bubble--separated from the normal doings of society--and it was from this perspective that I created this character.

You're a celebrity yourself. You're an Oscar winner. You're in a bubble. How do you keep it real? How do you personally pop that bubble?
I remember at one point I was doing a movie, flying on a private jet with an assistant who had an assistant because I was always missing an appointment, so I said I'll get him an assistant. At one point, I looked at my wife and we had to ask ourselves at the end of the day: Who's going to pick up the dog poop? Who's going to run down to the dry cleaner? You have to. I didn't like the way I started to become around people whose jobs it was to please me, so I let everybody go and I went back to the basics. I said to myself when you have a situation that you need help with in everyday life, do for you. I mean, when I go to concerts or a big crowd gathering, the organization might give me a security guard, but other than that, if I'm going to dinner or if I'm going out with friends, it's better to be real. That's been my philosophy.

When you began this role of O.J., did you have a different view of who he was and what happened than when you finished the role or did it remain the same?
Oh, absolutely. It's one of those things where every day I got a new script on the set and did more research. All the rumors that I thought that I knew just seemed to be off, you know? We were given access to both admissible and inadmissible evidence. I got to form my own opinion of not just the facts of the trial, but how he lived his life and how the people conducted themselves around him. When you get that fuller picture and you start to form an educated opinion, things come to light, and it was absolutely that act of discovery on this project every day. It really was a 6-month emotional rollercoaster for me. This role impacted me more than any other role that I have ever done.

What was the aftermath like of winning an Oscar? Was it what you thought it would be?
I guess the popularity of winning an Academy Award is there for a while. It's almost as if you get this royalty stamp on you and there's a glow, and that's cool for the lunches and the dinners and meetings that you take with studio heads, but then when that goes away-- because it does very quickly, because people lose their focus-- you then are put on a shelf. It's almost like the excitement of buying a Ferrari. You drive it, but then you put it in the garage. You love to tell people that you have it and you show it to them, but you don't want to go down certain streets because you're worried about a pothole or a scratch. You get put on this pedestal a little bit. But then, with anything on a pedestal, it creates a difference for people--professionally, personally--and then eventually things start to backlash, until you come to terms with what you are or what you do, until you get back to the brass tacks of it all--which is the work.

I think that's what my career went through, a metamorphosis of about 10 years. At one point I was greenlighting films and scripts that shouldn't have been made based on the fact that they had that stamp of approval of an Academy Award winner. And the good news is I got to learn the real process of filmmaking--directing, storyboarding, writing. That to me has been the most precious thing that came out of that Academy Award win, and that's what I take from that 10-year journey that I went on. And I think it's what grew me as an actor and artist. I went on Broadway. I wrote two screenplays, one of which people are talking about financing as a film. There's a lot of benefits to come out of it, but I think once you get that adulation in this town, you definitely go on this journey, this metamorphosis. It's definitely something that doesn't happen overnight, and it's definitely something that can change your career for the better if you stay present to it.

So when you're looking at roles now, like this role that you just finished, what are you looking for? What makes you say yes to it?
The truth is, you don't ever decide on a role, not when you first begin. You audition for the role and you're lucky to get it. What has changed now is, maybe I'm not in a room reading sides to a casting director, but I'm asking my agents to find the best filmmakers, who tell the best stories, and then I try to win the role. And whatever that role is, is really not my business anymore. I would never have said ten years ago, "I'm going to play O.J. Simpson someday," but I did give my agency the mandate to find me the greatest filmmakers with real stories. Today, many of those stories are being told on television, and they said, "Guess what? Ryan Murphy wants to have a conversation with you." And I was ready for it.

What is your take on the diversity conversation that's happening as it relates to the film industry and the Academy?
I think Alejandro Inarritu, the director of The Revenant, said it the best. He said, and I'm paraphrasing, the awards ceremonies are the end of the chain, and I think to focus on the beginning--the casting process is what we need to really focus on to find true diversity. I think that there's a hierarchy at the level of the studio system where films are being made on the scale that do get Academy consideration. There's a lack of diversity amongst executives in the position of greenlighting a film who feel that their stories are being told. If there's a diversity at the executive level, then we'll have diversity of the storytelling process.