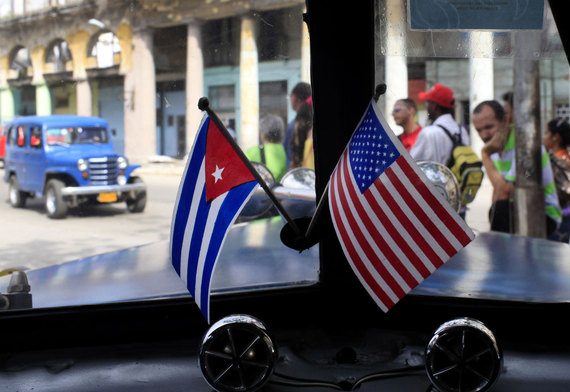 It is no secret that a small group of Cuban exiles in Miami have controlled American policy towards Cuba for decades.

The Cuban Embargo, which is five-decades old, does not allow American companies to do business with the island. Furthermore, through the Helms-Burton Act, foreign companies with operations in the United States are not allowed to conduct business with Cuba.

This group of Cuban exiles, which have every right to feel disgusted by the Castro regime, insists in keeping American policy towards Cuba intact, despite the fact that the Embargo has failed to bring about any regime change to the island.

Thus, when confronted with statistics and numbers, these hardline supporters of isolationism resort to moral grounds to defend their increasingly unpopular points of view. Rep. Mario Diaz-Balart (R-FL), a staunch supporter of the Cuban Embargo, recently declared that "his position is steeped in principle, and that despite the recent changes in Cuba -- allowing for more private enterprise and travel -- American policy should remain focused on politics and human rights, rather than on ways to use private enterprise as a way to help move the island away from communism and authoritarian rule."

How come we do business with some of the world's most authoritarian regimes with the worst human rights' records on the planet, yet we keep insisting that the Cuban embargo should be kept in place solely on moral grounds? China's human rights record is horrendous, but nobody seems to be suggesting halting trade with China.

Along with Rep. Mario Diaz-Balart (R-FL), there's Rep. Ileana Ros-Lehtinen (R-FL), Sen. Marco Rubio (R-FL), Sen. Robert "Bob" Menendez (D-FL) and Rep. Joe Garcia (D-FL); all of whom support keeping the Cuban Embargo intact, in order to have the higher ground on foreign-policy decisions when the Cuban regime collapses. Well, we've been waiting fifty years for that collapse, and it has not happened. The regime did not crumble to pieces when Cuba stopped receiving Soviet economic aid after the fall of the USSR, contrary to what many has predicted. So why would it happen any time in the near future? Particularly when Cuba seems to be moving away from a centralized economy into a mixed economy.

This so called Cuban-American Lobby, as the powerful Cuban-American Congressmen are called in Capitol Hill, needs to realize that an isolationist policy will not encourage a democratic transition, as long as American entrepreneurs and businesses are not allowed to trade with Cuba, and American citizens are not allowed to travel freely to the island.

And let me be perfectly clear. I'm not an apologist of the human rights violations that the Cuban government commits against political dissidents; neither do I support the continuation of their communist-stalinist model that controls virtually all the means of production. Cuba should open their markets, allow free and democratic elections and move towards a mixed economy. However, the Cuban Embargo undermines the efforts to achieve this goal, as it does not permit Cuba to trade freely with the United States, which is the biggest economy in the world.

Alfonso Fanjul, a Cuban sugar tycoon and long-time supporter of the Cuban Embargo, recently said that he sees potential in investing in Cuba, particularly as Cuba becomes friendlier towards foreign-direct investment.

Besides, it is also important to note that "a majority of Americans, and an even greater majority of Floridians, now favor normalizing relations or engaging more directly with the Cuban government" -- according to a non-partisan survey conducted the Atlantic Council.

A clear historical example of how economic engagement promotes freer societies is Willy Brandt's Ostpolitik and Kissinger's déténte. Brandt, who was President of West Germany from 1969 to 1974, believed that change through rapprochement would lead to the introduction of Western-style economic principles to East Berliners, who would eventually realize that their authoritarian government had some serious flaws. Along the same lines, Kissinger's déténte was responsible for opening relations with China and negotiating the Paris Peace Accords, which put an end to the Vietnam War.

Rapprochement works. Kissinger is unquestionably one of America's greatest foreign policy strategists and did not believe isolationism was the right way to defeat communism.

In the first six months of your presidency, you should launch an initiative to put to rest the half century of mutual enmity between the United States and Cuba. Doing so represents an opportunity of both major foreign policy reward and low domestic political risk. Mr. President, a bold initiative with Cuba, early in your presidency, will restore Americas credibility and demonstrate your political courage with the Cuban people, in the hemisphere and across the globe.

By getting rid of the Embargo, the Castro Regime will lose its excuse for economic underperformance and its anti-imperalist rhethoric will be greatly undermined. As more American investment pours into the Cuban economy, the U.S will have more leverage in the political future of Cuba, not the other way around. That's classic American foreign policy.

So my message to Rep. Diaz-Balart and its pro-embargo colleagues is very simple: take a look at history, particularly at Brandt's Ostpolitik and Kissinger's déténte, and abandon Cuban isolationism once and for all. Cubans at both sides of the Florida Strait will appreciate it.