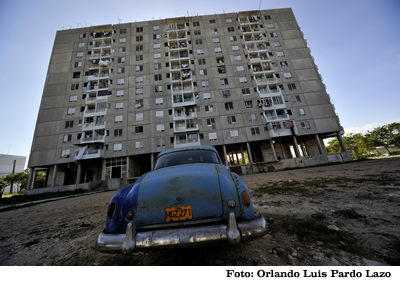 There is a detail of our reality that fascinates tourists and surprises collectors around the world: the number of old cars still running on the streets of the country. Right now, on some Havana street, a 1952 Chevrolet purrs along, and a Cadillac, older than the Minister of Transportation himself, is in use as a shared taxi. They pass by us, rusting out or newly painted, on the point of collapse or winning a contest for their excellent state of repair. These rolling miracles make up a part of our country, just like the long lines, the crowded buses, and the political billboards.

At first, visitors show surprise and pleasure on seeing the theme park created by these vehicles. They take pictures and pay up to three times as much to sit in their roomy interiors. After asking the driver, the astonished foreigners discover that the body of that Ford from the early 20th century hides an engine that's just a decade old, and tires adapted from a Russian Lada. As they earn the trust of the owner, he tells them that the brake system was a gift from a European friend, and that the headlights are originally from an ambulance.

Summer people marvel at the taste of Cubans in conserving such relics from the past, but few know that this is more by necessity than choice. You can't go to a dealership and buy a new car, even if you have the money to pay for it, so we are forced to maintain the old. Without these artifacts of the last century, our city would be less picturesque and more immobile every day.

Cars In Cuba Cuba
This Blogger's Books and Other Items from...