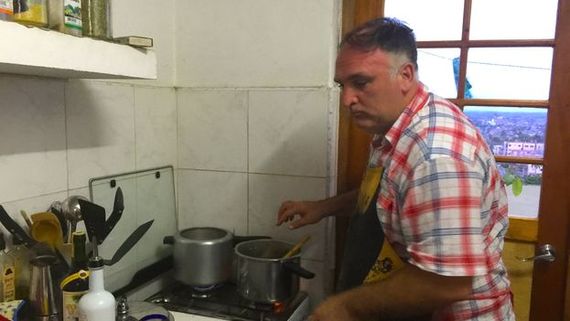 The chef José Andrés cooking in the kitchen of the 14ymedio newsroom. (14ymedio)

14ymedio, Generation Y, Yoani Sanchez, Havana, 18 April 2016 -- José Andrés arrived in Havana at the best and worst moment of the year. One of the most famous chefs in the world knocked on the door of the 14ymedio newsroom the same day that Barack Obama was saying goodbye to the Cuban people. The shortages in the markets were an incentive rather than an obstacle for the Spaniard who moves easily between the glamorous kitchens of Washington DC and the wood fires of an impoverished Haiti.

In his fingers, each ingredient becomes pure magic. "What do you have?" He asked. And the answer reflected this period of empty shelves in stores. However, the art of cooking is to combine precisely what there is, the ability to convert the little one has at hand into have something marvelous for the palate.

In Cuba you need to be more alchemist than cook to turn out a tasty dish.

There he was, in our newsroom, this Paracelsus of the stove. "What do you have?" He asked again. Very little. Since early this year, with the price increases imposed by the government on many of the food markets and the absence of goods in the stores that sell in hard currency, it is difficult to buy everything from a cabbage to a pound of chicken. On the shelf, a package of Russian oats, scored in 2010, lights up the eyes of chef José Andrés. "We are going to do something with this," he boasts.

Uniting the elements - including some he had bought under the counter in the streets of Havana - he turned a few somersaults and emerged from the kitchen with steaming and unique dishes. The great chef had climbed to the 14th floor to create an unforgettable dinner on an historic day.