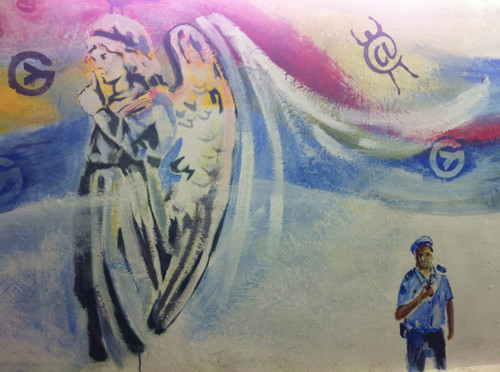 A mural in progress by "El Sexto" on the inside wall of my balcony. Photo: Yoani Sanchez

It's nighttime, the street light on the corner isn't working, and no cars go down the street at this time. A bony and agile hand quickly pulls out a can of paint and sprays a signature on a wall, ending in a five-pointed star. In the morning curious neighbors will read the rubric, "El Sexto" -- The Sixth -- and wonder why someone's name is a cardinal number. The president of the block's Committee for the Defense of the Revolution will reluctantly undertake the task of covering over the irreverent nickname, but the next night it will reappear, over and over, however many times it is painted over.

Bus stops, the walls of official institutions, trash cans, and ruins where there once were houses, are the canvas for this street artist to create his doodles. His nickname, already a piece of sarcasm, alludes to the government's campaign for the release of the five Cuban spies imprisoned in the United States. Danilo Maldonado -- with his name out of a soap opera -- prefers to call himself "The Sixth" to demand his release, too, although his prison is not a physical one but rather the massive enclosure of a lack of human rights.

Havana is already a 21st century city and not because the few newspapers that circulate here display 2011 on their front pages. Rather, it is the signs, the hints of modernity that protrude here and there from beneath the city's ancient shell. We even have cute or cryptic graffiti on some walks, timid marks of citizen expression that isn't about to find a space in other more conventional media.

Some young people dare to leave their stamp, sprayed in acrylics over templates made of cardboard, or as symbols painted on a column. Hurriedly, they stamp their improvised seal on a city already marked by excessive official propaganda. It is a refreshing phenomenon, and although many see it as damaging public or private property, it is a language that runs parallel to the rhetoric of power, a kind of scream in the form of colorful strokes.

Where in many countries they are already accustomed to the comings and goings of graffiti, here in Havana we look afresh at the vertigo of its multiple possible meanings, caught between rapture and outrage at its appearance. The ultimate master of this art, among us, is the skinny youth known as "El Sexto," the author of more than one graphic irreverence and even of some leaflets from where he launches his best known phrases that seem more like fragments of hip hop. "I am everywhere..." he shouts to us from a scrap of paper and after spreading that message the cops see graffiti artists behind every tree, suspecting even an infant in his stroller of hiding a spray can.

Last week in our capital city, the most playful of the artists working on facades was taken to prison. El Sexto was forced in into a car by three burly men; though they didn't identify themselves it was clear they were political police. They took him to a station that could have used a little of Danilo Maldonado's graffiti to relieve its lugubrious aspect. And they kept him there almost four days, to make him confess who had painted all those arabesques and flourishes. At first they talked to him of his immaturity, of the profitable artistic career that awaited him if he would put his spray can at the service of the official discourse. But the stubborn creature insisted over and over that those figures came only from his imagination and that he preferred the risk of being "alternative" to the meekness of official recognition.

Four days after entering that dungeon they released him to the streets, his streets, but not without making him sign an official warning. The same night he put his signature on a newly painted wall. But it is no longer the same.

Before, El Sexto was an anonymous presence, hidden, who painted any space he pleased; now they know his name, address and the number on his identity card. He has been converted into the number one enemy painter, and the punishment they will probably give him will keep him far from walls, sprays, from those early Havana mornings when with his skinny hand he put some color on such a faded city.

Yoani's blog, Generation Y, can be read here in English translation.Translating Cuba is a new compilation blog with Yoani and other Cuban bloggers in English.Yoani's new book in English, Havana Real, can be ordered here.