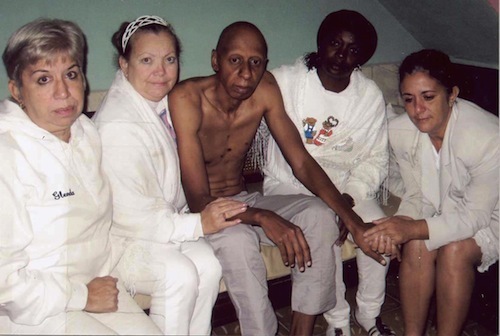 Photo: Guillermo Farinas with a few of the Ladies in White, taken during his successful hunger strike to free Cuba's political prisoners.

It's difficult to imagine that inside the frail body of Guillermo Fariñas, behind his face without eyebrows, is a willingness to confront discouragement. It is also surprising that at the times when his health was most critical, he never stopped caring about the problems and difficulties of those around him. Even now, with his gallbladder removed and painful surgical stitches crossing his abdomen, whenever I call him he always asks about my family, my health, and my son's school. Such a way this man has of living for others! It is no wonder that he closed his mouth to food so that 52 political prisoners -- among whom he personally knew very few -- would be released.

There are prizes that impart prestige to a person, that shine a light on the value of someone who, until recently, was unknown. But there are also names that add luster to an award, and this is the case with the Sakharov Prize for Freedom of Thought awarded to Farinas. After this October, the next recipients of this highest laurel of the European Parliament will have one more reason to be proud. Because now the Prize has a higher profile, thanks to its having been awarded to this man from Villa Clara, an ex-soldier who renounced arms to throw himself into the peaceful struggle.

Who better than he, who undertook an immense challenge and accomplished it, who has given us all a lesson in integrity, who has subjected his body to pains and privations that will affect the rest of his life? There is no name more appropriate than that of this journalist and psychologist whose main characteristic is humility, to be included in a list where we find Nelson Mandela, Aung San Suu Kyi and Cuba's Ladies in White. A straightforward man whom neither the microphones, nor all the journalists who have interviewed him, nor the cameras' flashes of recent days have managed to change. With a modesty so admired by his friends, Coco -- because even his nickname is humble -- has made the Sakharov Prize seem much more important.