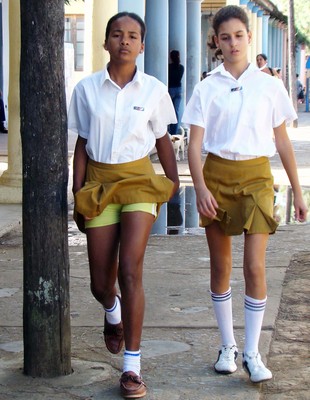 On December 10, Human Rights Day, my 15-year-old son came home from school and said he had been summoned to go to park centrally located in Havana, exactly the same place where, each year, a group of dissidents and non-conformists demonstrate for improvements for Cuba's citizens and political prisoners. The students of all the high schools in Havana were called to make up one of those painful repudiation rallies against people who peacefully protest, exercising their power as citizens to complain.

It was the director of the school himself who told Teo and his classmates to come dressed in civilian clothes so people would not know that they were students, called to defend their homeland against the provocations of their enemies. Several teachers announced that if it was necessary to beat up the Ladies in White, or other opponents, they must do it "in the name of Cuba."

When Teo told me about this it was as if I were transported back to 1980, witnessing the shouts, insults and eggs thrown at those people who chose to leave the country during the Mariel Boatlift. I remember one day 30 years ago, as the excitement spread through the halls of my tenement, while I, barely 5, looked on in terror at the aggression against a neighbor whose two sons had decided to emigrate.

My grandmother gestured furiously for me to get back inside, with no explanation of why the mob was shouting phrases like, "The scum wants to go, let them go!" We were never the same after witnessing such an act of militant fanaticism; the mistrust settled deep under the skin of the residents of that humble place.

So when they called my son to make up the shock troops I was as horrified as I was three decades ago, when I first witnessed that intolerance through the eyes of a child.