In a continuing series of guest posts by my fellow bloggers on the Island, today I am bringing you this article from the blog Sin Evasion, by Miriam Celaya, who won the Virtual Island award for the Best Journalistic Blog of 2009. 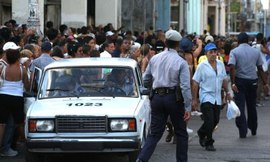 Until last February 23rd, it seemed that the imprisonment of the Black Spring 75 had been one of Castro's utmost blunders. The death of Orlando Zapata Tamayo, one of the civic fighters entrapped back then by the strong wave of repression unleashed by the dictatorship, goes to show that the events that took place almost seven years ago continue to have repercussions against the very regime that carried them out.

Not content with having allowed Orlando even a modicum of comfort, to spend his last days among his people, the dictatorship has launched its wolf packs onto the streets to suppress legitimate demonstrations of solidarity and respect by other Cubans for the courage and the resistance of a man who had the high-mindedness to confront the most powerful and protracted dictatorial government Cuba's history has known. Many independent Cubans were detained, others were threatened, and police operations raged throughout the day on February 24th.

By a strange coincidence, this February 24th, 2010, a date of historic significance for Cubans, was marked by fear, not because of the dignified and free citizens who went to the home of Laura Pollan, one of the Ladies in White, to sign the book of condolences, or on account of those who threw flowers into the sea in memory of the Brothers to the Rescue, also killed in the downing of their aircraft, another one of the "glorious" actions of Castro and his spies, nor by those who attended Orlando's funeral services. Now, the fear of the regime and the mercenaries at its service is palpable. They cannot conceive the power of shame, are ignorant of the virtue that envelops the sense of decorum, and cannot, even remotely, understand that freedom is a natural gift that is carried inside and it is -- therefore -- impossible to eliminate with steel bars. The Black Spring 75, Orlando Zapata, political prisoners and all of us who are disobedient are free.

The Cuban regime, on the other hand, is today the real prisoner: it is locked up in the very logic of repression and violence it generates. Victim of the system it alone forged, incapable of producing anything other than hatred and fear, it now shamelessly displays these things while trying to hold on, through terror, to its only real interest: power. The only thing is, many Cubans are losing their fear.

Orlando Zapata Tamayo's sacrifice also contains a hopeful singularity: he has died, but Cuba is beginning to awaken. Small niches of previously unconnected civil society, of the opposition, independent journalists, the Church, and ever-widening social sectors from very diverse ends of the island have begun to link. Sooner or later, reality will change: these are not times for dictators.

The Cuban president (the lower case is intentional), Raul, the Grey, the Second Fiddle, has made a statement to the foreign media saying he regrets Orlando's death. Of course, this is not a spontaneous expression of sincerity; this time, however, I believe him: he has more than enough reasons to regret this and many other deaths. 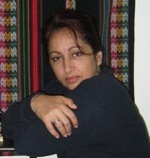