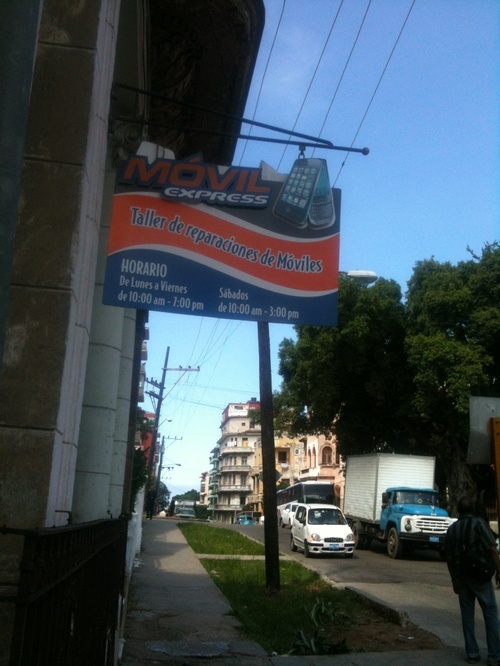 The sign is colorful, well designed, and announces repairs for mobile phones, especially iPhones. Outside people are waiting in line with their favorite toy in their hands. They are Havana's Apple fans, the "Mac lovers" who have one of these extraordinary smartphones. They are those who have managed to buy it in the informal market thanks to some income of convertible pesos, while others have received it from a relative or friend living abroad.

The diversion of state resources and ethically reprehensible businesses provide the resources to many of these worshipers of new technologies. For those who can't count on any additional financial income beyond their salaries and who don't have a relative who's emigrated, it's always possible to pay less for an imitation "made in China" from the ingenuity of Steve Jobs.

Although Apple has no stores in Cuba -- nor does any other U.S. company -- it is among the most desired brands in the widespread illegal trade. In a country where social differences are more visible every day, the cellphone and computer stand as some of the most preferred status symbols. Models of every type of cellphone are available. The coveted Samsung Galaxy 3S can already be bought in the largest of the Antilles through classified websites such as Revolico.com. The HTC causes a sensation, and the Blackberry, with its diminutive keyboard, has a passionate following.

But the products with the bitten apple logo are considered the best among those under 25. iPhones of all generations can be seen in the most unusual places. On a crowded bus, where the most humble people travel, suddenly a ring-ring is heard and there is the stylized creation of the Californian entrepreneur. A blend of sophistication and scarcity, of modernity and backwardness, define our days.

It will be some time before Apple is able to open one of its establishments in the Havana capital. The restrictions of the U.S. embargo in place since 1962 prevent it. But neither would the Cuban government allow such a powerful competitor entry into its monopolistic -- and rickety -- market in computers and technology. In mid-2008 when the timid reforms of Raul Castro authorized nationals to buy computer equipment, prices targeted a captive market -- there were no other options.

In the first months after the announcement you couldn't find laptops in the stores with prices less than $2,000, and a PC without a monitor for about $900. This in a country where the average monthly salary doesn't exceed $20. Can you imagine the blank stares of potential buyers on seeing such excess? But despite such outlandish numbers the products sold -- because there was no other legal alternatives -- while currently it is rare to find a store where computers remain for sale.

They only display some outdated chassis, with a few peripherals such as a mouse or keyboard. The supply of computer equipment didn't continue, perhaps because they were just looking to create a big todo announcing the flexibilization -- and after those notorious newspaper headlines the government lost interest in our continuing to be computerized. So the bulk of the sale and purchase of technology has moved into the shadows of illegality.

But what is surprising is that local technicians can do practically anything with Apple products. Install applications, unlock these phones to work under the Cuban phone company, change internal parts, and jailbreak and untether them for all tastes and needs. Very clever solutions are implemented to alleviate the great obstacle of not having access to the Internet from these touchscreen gadgets. So in the absence of connectivity, tools and programs that work offline abound. For a price ranging between $5 to $10, a client can leave one of these private phone repair centers with true marvels.

For example, the complete version of the Spanish Wikipedia -- installed on a memory device, with or without images in the articles -- is very popular. Also in great demand are maps of Havana and of all of Cuba, street by street, detail by detail, that smartphones also incorporate. In some of these gadgets it's possible to activate localization that works not by satellite, but through triangulation from land-based antennas. With which the knowledgeable users manage to locate themselves on a map and even see how the "blue ball" moves between grids of the street and and to what extent.

A pirated application that includes the telephone company ETESCA's data base incites special passion. With this you can determine the name of the owner of the phone of any incoming call, their address and -- horrors!!! -- even their identity card number. When we're talking about being ingenious, Cubans have always had something to talk about.

In some building doorways in Central Havana, there are points of sale for the accessories for Apple's creatures. Silicone cases, hands-free headsets, electrical chargers that plug into a car's cigarette lighter, acetate film to cover the glass and prevent scratching. A flourishing market for all types of peripherals that revolve around smartphones. But what is most surprising is that it exists in a country where none of that is sold in official stores.

In short, by the time Apple actually touches down in Havana it will encounter a community of followers it never imagined having in the largest of the Antilles. It will also be amazed at the size informal market that circulates around the resale of its applications and the bold "incursions" that are made in the interior of the circuits of its iPhones and iPads. For when it comes to the company founded by Steve Jobs -- if it comes -- we have already bitten the apple everywhere, but we haven't swallowed, swallowed and incorporated it into our lives. For now: enjoy!