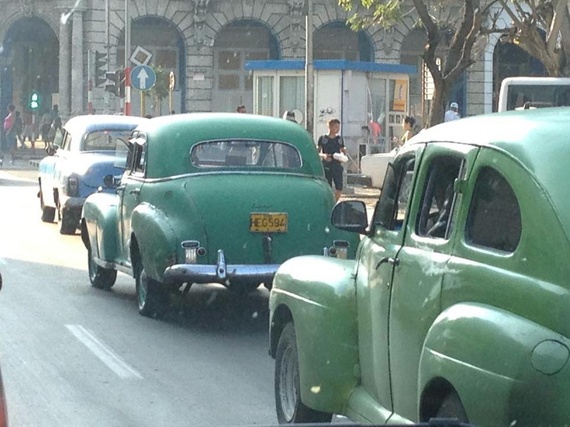 Cuba is often portrayed as a country stuck in the 20th century. While some relics, such as cars from the '50s and '60s, are still readily found, Cuba also possesses modern forms of transportation. Like these variations in modes of transportation, Cuba has long been a country with a considerable range in health care facilities and biomedical industry. President Obama's decision to begin restoring diplomatic and economic relations with Cuba is historic, and the U.S.-Cuba detente provides a valuable impetus for Cuba to expand its local and international biomedical capacity.

In my course on "Health, Medical Professionals, and the Body in the African Diaspora," I often feature Cuba as one of the case studies. Cuba is a perfect example of what a small country from the Global South can do through public health initiatives. On par with the United States, Cuba's life expectancy rate is 78 years. Public health is socialized, which generally increases Cubans' access to health care, but disparities as found in most of the world still exist. For example, pharmacies in more affluent neighborhoods tend to stock a greater range and number of pharmaceuticals than those in those in lower socioeconomic neighborhoods. Similarly, some hospitals have more advanced medical equipment than others. Despite some health inequities, Cuba has still been a major contributor to medical advancement.

Cuba's physician-patient ratio is one of the highest in the world, and Cuba also draws people from Latin America, Africa, and Europe to visit for routine surgery, medical interventions and cosmetic enhancements. Surgeries, for instance, include heart surgeries, heart transplants, and advanced ophthalmological procedures. Similarly, medical professionals have created a number of pharmaceutical advancements as a result of the Cuban government's significant investments in Research and Development. Consequently, Cuba produces vaccines and serums for a variety of ailments. One drug, Melagenina, is one of only a handful of pharmaceutical drugs for the treatment of vitiligo.

Cuba is also a major proponent of medical diplomacy and regularly sends physicians, nurses, and other medical staff throughout the globe. These biomedical exports have been most active in areas such as Latin America and Africa. Since 1960, Cuba has sent doctors to places such as Brazil, Honduras, Venezuela, South Africa, Ethiopia, Angola, Laos and Algeria. These medical professionals bolster health care in rural areas, respond to disasters and supplement doctors lost through emigration abroad. In October 2014, Cuba sent 256 doctors and nurses to Sierra Leone, Liberia and Guinea to join the efforts to contain the ongoing Ebola outbreak. This staff arrived at a critical time when infection rates were rising rapidly. The dearth in medical staff was still apparent with most of the staff coming from the Ebola-stricken countries and Doctors Without Borders. Shortly after the Cubans arrived, other governmental and non-governmental entities began to send more staff.

Cuba's collaborative commitment to the Ebola epidemic has helped to bring attention to some of its biomedical development of the past fifty years. As trade restrictions are loosened, Cuba has the opportunity to expand its biotechnology capabilities and engage with new collaborators by exchanging medical knowledge and gaining access to new technologies.