Culottes are back, people. Don't think you can pull 'em off? Think again. We put together a brief guide on how to wear the wide-leg bottoms like a total fashion pro. Don't worry; you can thank us later.

First things first: What on earth are culottes?

Culottes are garments that look and hang like skirts but are, in fact, short pants. They first became popular during the reign of Henry III of France in the 1500s and later became convenient in the Victorian era, when women became more active and needed the freedom of pants but the look of a skirt.

Are they really a trend now?

You betcha. We saw culottes all over the spring 2015 runways. From Tibi to Jil Sander to Hermes, designers showcased the comfortable pants in a variety of colors and patterns. And don't stress about these babies going out of style anytime soon, they are still going to be huge come fall. 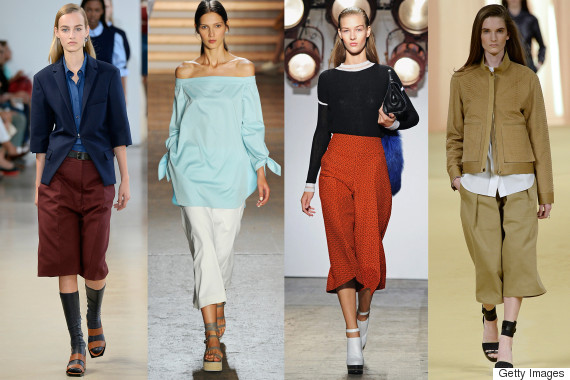 How can I make them work off the runway?

1. Culottes can cut your legs off at an awkward spot and make you appear shorter, so wearing a monochromatic outfit helps to create a long, lean line, making you appear taller.

2. Wear a dress over your culottes to experiment with proportion (and stand out from the crowd).

3. Culottes and heels go together like peanut butter and jelly.

4. Throw on a white button-up and some pumps for an office-appropriate outfit.

Where can I buy them?

Check out this Polyvore for a roundup of our favorites.

Are you a culotte enthusiast? Tweet us a photo in your favorite pair @HuffPostStyle with the hashtag #HPCulottes for a chance to be featured.