Steven Fales wants to help you quit your cult habit. 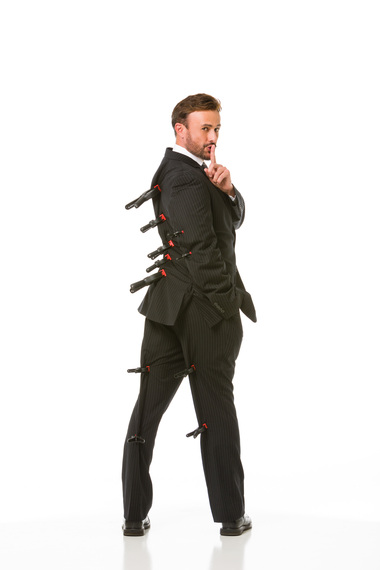 The creative force behind the award-winning Mormon Boy trilogy shares his own "obsessive cult disorder" in his latest solo show, Cult Model. After originally writing the piece in 2003 during a ten-week run of his first play at Miami's Coconut Grove Playhouse, the wholesomely handsome Fales (once a candidate for the Church of Jesus Christ of Latter-Day Saints poster boy) performed it as a benefit for the Utah AIDS Foundation.

At the time, reaction within the Mormon community was so hostile that Fales feared he would lose visitation rights with his children if he continued to perform the show. With his kids now grown, the actor has revived the show in order to help audiences learn to think and act for themselves.

Recently I had the chance to speak with the former LDS missionary about the New York City premiere of Cult Model, as well as about his philanthropic work creating the Possibility Foundation.

Stroud: Why the interest in cults?

I'm a huge Landmark Forum person. Landmark really helped me right after 9/11. I was in New York. I'd been escorting. I was in victim mode, and the Forum changed my life. It's really why I started writing Confessions -- I just can't say enough about what Landmark did. But then I did all the courses, and I got everyone to do it. I hit the cult ceiling where I wasn't getting any more value.

Stroud: How do you define reaching the "cult ceiling"?

Fales: When you first join a cult, it has the answers. Your life expands; your world expands. You have new language; you have new community; you have new purpose and meaning. You've found the answer.

When I first joined the "ex-gay" movement, it had all the answers. The National Association for Research and Therapy of Homosexuality was so seductive: it would make me straight. And I bought into it. Man, I told my dad that first night that if I had a million dollars I'd give it to NARTH. That's how wowed I was. So cults promise you the moon, but they underdeliver. You hit that cult ceiling.

Stroud: The Mormon Church, Landmark, the ex-gay movement -- what other groups have you been involved with that you would define as "cults"?

Fales: I'm trying to take the stigma out of the word "cult." It's a zealous, religious devotion to a leader, idea, or a particular book. I've been involved in the recovery movement and that, itself, can have cult elements. Now, no one wants to admit that, but I can turn anything into a cult.

Fales: Dependency. I want someone to think for me. I could turn my psychiatrist into a cult figure. I'm not a psychologist or a sociologist, but I think all cults are quests for our fathers -- not parents -- but our fathers.

Stroud: Why fathers and not mothers?

Fales: Cults take the place of daddy without us even knowing. They give us structure.

Stroud: I understand you consider the sex industry a type of cult.

Fales: It's a cult of sex work. I got out of the sex industry 14 years ago. I feel like when we pay for sex we lower the bar in human relationships.

Fales: I could talk about everybody, absolutely, but we as gay men in our fabulous sex industry have more in common with a young girl who's strapped to a bed in South Dakota in a human trafficking ring. We just do it a little more fabulous -- and we don't talk about it.

Now let me just say that I am pro-sex. I believe sex should be for fun and for free. I'm also pro-relationship. It's very hard to develop true emotional intimacy with somebody when we're paying for sex. It's a transaction. Everybody gets hurt. Then it gets to an extreme. You bring the drugs in, you know. We need to clean that up.

Stroud: As a former sex worker, you speak with a lot of authority.

Fales: I've written extensively about it. We have a world of "sugar daddy" syndrome and the "trophy boy" thing, not unlike the "trophy wife" thing. We as gay men need to lead in equality of our relationships, not the quantity of our partners.

Stroud: What's the Possibility Foundation, and why did you found it?

Fales: When I was transitioning out of the sex industry, I wanted to write this little play, Confessions of a Mormon Boy. I was broke and scared. I left cold turkey out of the industry. I was in New York and called professors. I told them I was writing a play and asked if they could please help me float for a month. They gave me the time to write a solo play that changed my life. I want to give...

Stroud: Were you in school at the time?

Fales: I reached out to my old professors and my dad. So this is what happened: you know you've got to stop. Your life is going out of control. You've lost your light. You've lost your dignity. You're trying to restore it, no matter how okay they try to make you feel as a hooker: 'Oh, you're great, you're so great!'

When I saw Nicole Kidman in (the movie) Moulin Rouge -- she was a high-end courtesan; she had no freedom; she had no beauty; she had none of the bohemian values, and she was dying -- I saw myself. I was a courtesan who was going to die if I didn't stop.

So, we all need help. Every sex worker, I believe, has a dream that they really want to make happen. I would like to provide scholarships for them, whether for a nice camera or a stand-up comedy workshop. I want to facilitate that through the Possibility Foundation. I want to help sex workers, female and male, achieve their next phase of life and get on with their dreams.