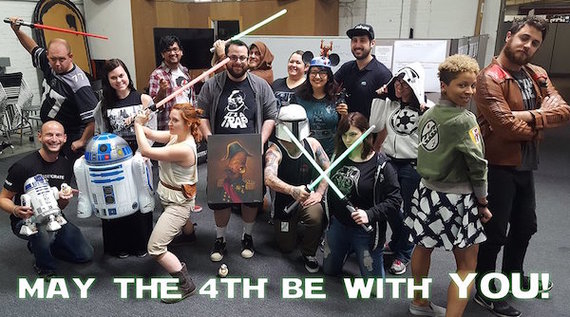 It's been almost a year since I joined the Loot Crate team, and I'm grateful to report that I genuinely love coming to work. The mix of aggressive goals, eclectic talented people, and extraordinary culture continually drives my desire to be part of this fast-paced environment. It is difficult to pinpoint what about this company's culture makes it so enjoyable. It's not only about our core values, beliefs, and attitudes. There's this strong sense of community and belonging that we've created centered on celebrating the geek, gamer, and pop culture-related things we're all passionate about--whatever they may be. It's clear to me we've succeeded in creating a vibrant culture, but how did we do it? What are the key ingredients in the recipe for success? More importantly, in paraphrasing the words of Airbnb CEO Brian Chesky, how do we not "f*ck up the culture" as we continue to grow at an exponential rate?

What defines a company's culture is difficult to explain easily because it is an accumulation of a thousand things that happen day-to-day. But describing a scene from this past Cinco de Mayo may help give a glimpse into Loot Crate's culture.

I walked into the office a little before 9am to greet members of the team already hard at work 30 minutes earlier than normal office hours. Our Admin Andrea just finished hanging up the Marketing team's piñatas and putting out the Mexican candy assortment she bought for everyone. Throughout the morning, yells of "tacos!!" can be heard due to the upcoming taco lunch the marketing team catered to celebrate the holiday. Within minutes of being strung, the piñatas became fair game for Nerf gun target practice with successful shots being cheered. During lunch, Mariachi music streamed softly while we discussed which Marvel movie trailers we liked the most, Captain America: Civil War being the clear winner. It was a fabulously festive lunch, and within 35 minutes we were all back to our desks diligently working away.

One could say Loot Crate is a "work hard, play hard" culture, but it's much more than that. There is a sense of community that is palpable. It permeates the organization, providing the foundation for our values and attitudes toward each other and our customers, deemed "Looters." A sense of community isn't the only factor that defines our culture. Diversity is celebrated; it's quite a motley crew. My marketing team of 20 is diverse in ethnicity, gender, sexual orientation, fandoms--all of it. Plus, our Culture Team (yes, we have three-person Culture Team) is always hard at work bettering our work environment, throwing festive parties, monthly company BBQs, coordinating weekly activities like yoga, and celebrating what it is to be a Loot Crate employee.

Despite these concentrated efforts, we've seen some bumps in the road and some blows to morale along the way that go along with rapid growth. Two years ago Loot Crate had about 60 employees. Now we have over 500. Necessary team restructuring has occurred across the company a few times, which was tough on morale. For those that prefer stability and fear change, it isn't easy. In the last 11 months my role and title has changed three times, my desk five times, and my responsibilities countless times. This kind of company isn't for everyone, but it can be tremendously rewarding if you're able to weather the storms.

However, through concentrated effort we've managed to cultivate a culture that has endured through the various storms. How? For starters, it has to come from the top. Our CEO, Chris Davis, understands the importance of company culture. The Culture Team reports directly to him and they're constantly on the watch for potential disruptors. We also measure it to gauge if it's improving or not, talk about it, and constantly try to improve the overall positive perception of it on a weekly basis. The leadership team being in agreement around the critical elements of what defines a company's culture is also important. Even with these efforts, there is no guarantee we will be able to continuously improve the culture, primarily because there is no proven formula for improvement. We can, however, trust that our resourceful and dedicated team will do whatever it takes to "Not f*ck up the culture."

What defines your company's culture? What have been the ingredients for success or failure? Are there progressive or interesting things you or your company's leadership team are doing to improve upon it? These questions are the answer because it's a system of constant improvement and change. Although a thriving culture doesn't guarantee a company's success, it does make the battle to become the next Unicorn a much more enjoyable journey.