Cultural appropriation has been a real hot topic lately, but I wouldn't say that this most-talked-about issue is totally understood by all. Every call-out of cultural appropriation sparks a "sharing vs. stealing" debate. Most recently, 16-year-old actress Amandla Stenberg called-out 17-year-old reality-star Kylie Jenner for appropriating black culture without expressing any true interest in black issues. Cue the angry uproar from tween fans, conscious Tweeters, and beauty enthusiasts alike. Even Andy Cohen chimed in his useless opinion about "the feud" between Stenberg and Jenner. The issue here isn't simply about white girls wearing cornrows. Cultural appropriation is deeper than that. Let's try to break this down.

Here's what Cultural Appropriation is: A dominant group adopting/trivializing elements of a culture without acknowledging the existence of its original source, especially when the adopted culture belongs to an oppressed group.

Here's what it is not: Black girls wearing blonde wigs and weaves.

I'll spare you the in-depth history lesson on why people of color continue to adopt Eurocentric beauty standards in order to adapt to and thrive in this society. I won't bother to explain how black people were (and still are) shamed and ostracized for our natural kinky, curly, and "untamed" locks. I won't spoil your Google moment, because seriously, research and context are everything. What I will explain is why I'm not so much bothered by Kylie's hairdo as much as I'm concerned with the bigger picture.

Stenberg's message is not about excluding non-black girls from braids. It is about acknowledging the existence of the people behind the culture. To understand the issue with cultural appropriation is to understand our reality. Eurocentric beauty standards dominate fashion, media and beauty industries on a global level. In this country alone, there is a clear disparity between whites and non-whites on screen. This means, most Americans are shown only a limited perspective of our world. According to a recent survey from American Society of News Editors, "more than 38,000 journalists work at 1,400 US newspapers, but only 4,700 are minorities. That is an average of three non-white journalists per newsroom." (Via Aljazeera) Influence is infinite and can be found anywhere, but when the messengers and gatekeepers of our news, trends and pop culture are majorly from one group, the authenticity gets watered down or just washed away all together. 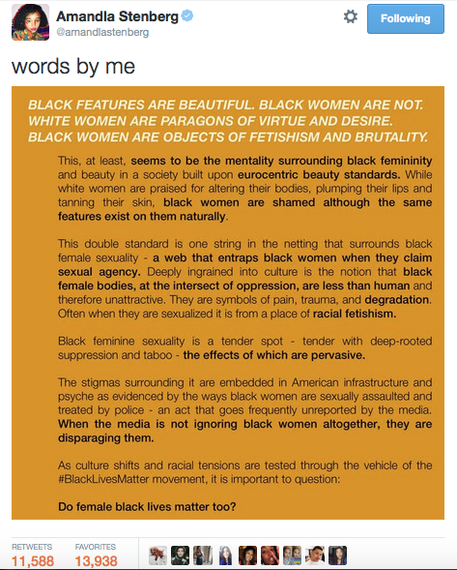 The Instagram photo on Jenner's page that caught Stenberg's attention features the reality star sporting a basic cornrow hairdo with the caption, "I woke up like disss." Ebonics be so fun, ya'll. It's always a good time when you're twerking, patting weaves, and singing along to a hip-hop song. Black culture is just so fun...except when it comes to the real and uncomfortable aspects like police brutality, racism, and intersectionality.

Most would argue that the lack of direct relation to black issues is the reason behind the silence of many white celebrities who adopt elements of black culture. However, if one's lack of relevance to something so essential to black culture (such as protect hairstyles) does not prevent them from participating in the more fun side blackness, why should one feel limited when it comes to real issues? Embracing a culture includes celebrating, appreciating, and advocating.

Of course, everyone has the right to wear whatever hairstyle they please. Black girls aren't hiding in closets waiting to pounce on white girls interested in box braids. Obviously, no one is expecting a white woman to sing the Black National Anthem every time she rocks a plait. The problem is the erasure of identity, roots and culture. The problem is the general preference and acceptance of black culture without black people. So how do we navigate what's cultural appropriation if we all have the freedom to partake in any and every culture outside our of own? One word: representation.

We typically rely on the media to share our narratives and to learn the narratives of others. When a beauty blog highlights bantu knots as a hot new style called "mini-buns," or when a white celebrity is celebrated for a style that is shamed on their black counterparts, or when a fashion magazine praises typical black features or styles on only white bodies, or when a white pop star is identified as the creator of anything traditional to black culture, or even when a step team is misidentified as a black sorority, blackness is erased. The careless inaccuracies show me that my culture is fun to play with, but not worth actual research. It isn't a matter of isolating black things to only be done by black people. It is a matter of social responsibility among influencers, including celebrities and journalists.

The moment mainstream media respectfully recognizes, acknowledges and represents the source, purpose, and most importantly the people behind different cultures, rather than reduce it to just costumes or hot trends, is the moment we can begin to define "cultural exchange." Until then, #DontEraseMe.

A writer for all things life and culture