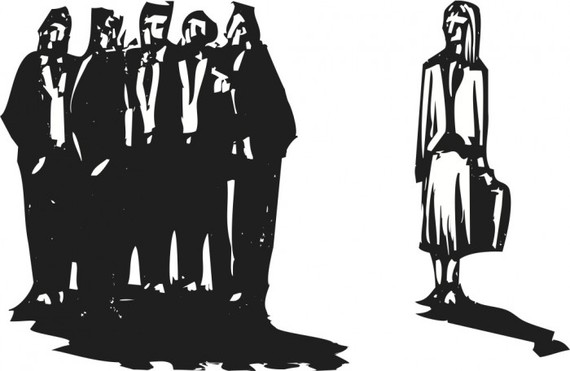 The trade association for the venture capital industry, the NVCA, gathered yesterday in San Francisco to talk about the state of the industry and some of the key policy issues we are facing. The short list is an obvious one for anyone who has been reading the news lately: Net neutrality, immigration reform, and patent reform are all hot topics in our industry. More inward-looking topics like the rise of corporate VC and new emerging managers also were batted about.

But one panel stood out for me yesterday, and not just because I was on it: "Women in VC". Maria Cirino of 406 Ventures led a discussion regarding the stubborn reality of the massive, pernicious gender gap that exists in our industry. Because the numbers are so stunningly bad -- Dan Primack did some analysis a few months ago that showed that only 4 percent of all senior VC partners are women and NVCA statistics show that 11 percent of all VC professionals are women -- I wanted to spend some time sharing the observations and discussions that came out of the panel in the hopes that it will spur further discussion in the community.

The panel was an awesome group led by Maria and included Kate Mitchell of Scale Ventures, Diana Frazier of FLAG, author Vivek Wadhwa and Veracode CEO Bob Brennan. I don't know exactly why I was on the panel, to be honest, but it probably had something to do with a blog post I wrote four years ago titled "The VC Gender Gap: Are VCs Sexist"? It may also be that at Flybridge, after founding the firm with all men, we have hired a majority of women (5 out of 9 investment professional team members). That said, the four general partners are still men -- more on that shortly.

Wadhwa kicked things off with a recitation of some research in the area. Specifically:

Only 3 percent of all tech firms are started by women, although venture-backed companies led by women perform equally well if not better.

Newsweek's cover story this week is titled "Women entrepreneurs fight for their piece of the pie" and shares some of the posts going around on Secret that depict the bad behavior of VCs in pitch meetings with women.

A data point I didn't get a chance to mention during the panel is that only 9 percent of all HBS case study protagonists are women -- something the dean has identified as an issue and has stated a public goal of getting to 20 percent (I have consciously tried to address this in my entrepreneurship class, where 40 percent of the protagonists are women and more than half of the panelists I bring in).

With the data on the table, the real discussion began. Everyone agreed there is a pervasive bias in the industry. Not everyone agreed what to do about it. A few observations were interesting to me:

Paul Maeder at Highland shared his conclusion that the industry is culturally dysfunctional. There is no good logical reason for the numbers to be as bad as they are. He drew an analogy with gay marriage, where there after decades of discrimination, we recently hit a tipping point where suddenly it was no longer culturally appropriate to block gay marriage. What needs to occur to hit that tipping point regarding women in venture capital?

Someone pointed out that corporate VC is less gender biased, perhaps because corporate America has rules that they live by. Although there is still plenty of sexism in corporate America, there are systems and processes in place to support diversity, recruiting and mentoring. Small VC partnerships do not live by similar rules. One woman corporate VC in the room who had previously been at an institutional VC observed that she preferred the partnership dynamic in corporate VCs where the investment committee is not made up of other investment partners (instead, it's the CFO, treasurer and other corporate leaders) and therefore the testosterone-filled competitiveness of the dreaded "partnership meeting" did not exist.

The industry is a pattern-recognition industry, and -- as Vivek points out in a WSJ article he wrote -- pattern recognition can become code for sexism. One women VC I interviewed in advance of the panel shared with me:

"Whether we like it or not, females act and are different than males, and I believe that lack of pattern recognition makes it harder to push through. So, partnerships need to make a conscious effort to not jump to conclusions when a colleague does something different -- rather push themselves to look at results, not merely the path."

Entrepreneur-turned-VC Heidi Roizen wrote a scathing blog post about her own experience last week that touched on this theme called "It's Different for Girls." It may be easy to dismiss Heidi's stories as what happened in the past, but in talking to my women colleagues at Flybridge, I hear similar stories, including senior VC men using their power status as a tool to hit on younger VC women. This puts the woman in a no-win situation. On the one hand, these interactions can represent legitimate networking opportunities to build relationships across firms with potential mentors. But on the other hand, these interactions might put them in an awkward situation and further damage their reputation if and when it is clear that the meeting is not purely professional in nature.

I raised the question whether we needed an explicit, organized Affirmative Action program in the industry, modeled after what elite universities have successfully executed on to ensure diversity and gender balance in schools. I have floated this around to a few other women VCs in recent weeks and get mixed feedback. Some have said it is absolutely necessary and would bring great focus and attention on the issue, forcing different conversations when sourcing and hiring VC professional talent. One woman VC friend pointed out that a big part of being a VC is confidence -- confidence in your investment judgment, in the board room, in the partners meeting -- and that women already have "Imposter Syndrome" and can lack that confidence. Having an explicit Affirmative Action program might serve to only further undermine their confidence in the business.

There was a lot of discussion about how to make sure we fill the pipeline (i.e., recruit junior women into the business from business schools and industry) and then do not lose talent as they progress. There was good debate back and forth about whether the job was conducive to raising a family. Many thought it was given the flexibility over your schedule, but the cultural dysfunctionality needed to be addressed to make the work environments more supportive to women having kids while serving as venture capital professionals. Many high-end professional services firms seem to have figured this out (e.g., Goldman, McKinsey, BCG) so why can't VCs? On this point, we have some interesting case studies of the five women investment team members we have hired at Flybridge, onebecame a VC partner at another firm (she moved to Europe for personal reasons) and just had her first child, one became an executive at a portfolio company she helped us find shortly after she had her first child, one started her own advisory firm to start-ups while raising her kids. One is graduating HBS next month and one is with us.

As with any hard problem, there is no silver bullet. But asking hard questions is what VCs are supposed to be good at, and this is an area where some really hard questions need to be asked. More to come, I hope.