For some people, time is money. For others, timing is everything. Whether one is searching for a window of opportunity, hoping to ride a groundswell of support, or participating in an established grassroots movement, the importance of seizing the moment and making the most of its potential can never be underestimated.

Some cry out "Carpe Diem" while others claim to see an omen of mystical convergence which can offer humanity some sorely-needed consciousness raising. In some cases (as in this song by Richard Rodgers and Stephen Sondheim from 1965's Do I Hear A Waltz?), the opportunity at hand is a romantic one.

In his bestselling book, The Tipping Point: How Little Things Can Make A Big Difference (2000), author Malcolm Gladwell posited that "Ideas and products and messages and behaviors spread like viruses do. The tipping point is the moment of critical mass, the threshold, the boiling point." Although Sergio Franchi's lush rendition of "Take The Moment" doesn't make it seem like there's any kind of fire that needs to be extinguished, these two songs from Jerry Herman's 1969 musical, Dear World, send a loud and clear message that time is of the essence.

Two recent productions by Berkeley-based theatre companies tried to create a sense of urgency for their audiences around a specific moment in time. One was based on the need to develop a solution to an ongoing racial crisis in America; the other addressed an ecological crisis taking place in the world's oceans. If you think such topics are nothing more than liberal fluff, I would urge you sit down and read John H. Richardson's blood-curdling article in Esquire Magazine entitled When The End of Civilization Is Your Day Job.

Directed by Leah C. Gardiner (with Marcus Shelby playing music he composed for double bass), the Berkeley Repertory Theatre presented the Bay area premiere of Anna Deavere Smith's latest play, Notes From The Field: Doing Time In Education - The California Chapter. With young black men being killed on a routine basis by white policemen, Smith's new theatre piece tries to examine the failed social structure which has led to many of these men being sent through a pipeline that leads straight from school to prison.

A native of Baltimore (a city which had its fair share of racial tension in 2015), Smith describes her big break in the following clip.

In addition to her work in film and television, Smith has gained fame for the detailed portrayals that she creates of ordinary Americans (based on intense research and long hours of interviewing). In works such as Fires in the Mirror (1992), Twilight, Los Angeles, 1992 (1994), House Arrest (2000), Let Me Down Easy (2008), The Arizona Project (2008), On Grace (2014), Reclaiming Grace in the Face of Adversity (2015), and Never Givin' Up (2015), she creates vignette-driven docudramas which reflect life in these United States. In the following clip, she explains the interviewing technique which allowed her to get to the heart of some of the people she has interviewed.

As Smith began her research for Notes From The Field: Doing Time In Education - The California Chapter, an unmistakable pattern quickly came to light. As she explains:

It did not take long to have my lens open onto a much bigger picture of poverty and its consequences in the emotional, physical, and intellectual development of youths, both inside and outside of school. Privileged kids get [charged with] mischief. Poor kids get pathologized [and sent to jail].

There are in fact many pipelines to prison. I have seen, especially in my hometown of Baltimore, how the punitive aggression young people experience lines up with a relationship to policing in their communities. This is something due to current technologies, that you the public have witnessed frequently this year, starting with events in Ferguson. We have an urgent economic, moral, and security problem in front of us as Americans: Racial and economic inequality. Tackling it requires nothing less than a robust, reinvigorated public will. The change starts with you.

Smith's new show is broken into three acts. The first and third acts feature Smith onstage, portraying some of the people she has interviewed. These include:

In the second act, the audience is broken out into discussion groups and asked to identify problems in their community which need attention and make suggestions about simple things that might be done by themselves and their friends to help improve the quality of life where they live. 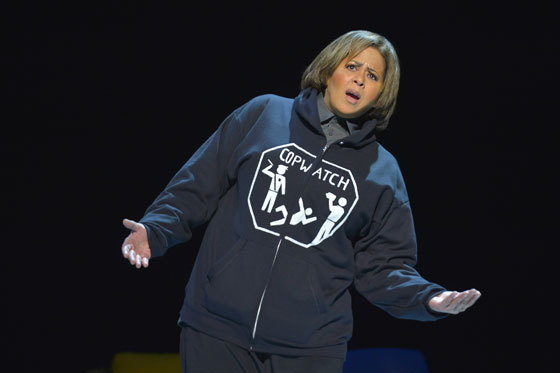 Anna Deavere Smith as Kevin Moore (the videographer of the Freddie
Gray beating) in Notes from the Field: Doing Time in Education,
The California Chapter (Photo by: Kevin Berne)

On July 14, President Obama's speech before the NAACP Conference in Philadelphia focused on what Smith and so many others have described as the school-to-prison pipeline. In the following clip you can listen to the President explain how institutionalized racism adversely affects African-Americans and call for sentencing reforms in our criminal justice system.

To cap off its 25th anniversary season, CentralWorks recently presented its 48th world premiere: a "Central Works Method Musical." Written by the company's co-artistic director, Gary Graves, and directed by John Patrick Moore, the piece is entitled Project Ahab; or, Eye of the Whale. As Graves explains:

"For years I've been searching for a theatrical vehicle that would allow us to address the great ecological struggle facing us as a species. I happened to see the PBS special last year titled A Fierce Green Fire. One of four episodes in the documentary dealt with the early Greenpeace campaigns to save the whales and prevent the killing of seal pups for their fur. There was a tension in the Greenpeace organization early on about what tactics should be deployed in order to achieve the movement's ecological objectives. It was the same debate the civil rights movement struggled (and still struggles) with today. That debate is perhaps most essentially represented in the nonviolent resistance path advocated by Martin Luther King, Jr. versus the more militant approach articulated by Malcolm X in the phrase 'By any means necessary.'"

"That argument seemed like an engaging, relevant theme to me, now, as we ponder how to stop the accelerating degradation of our environment in the face of global economic forces that seem unwilling or uncaring about the ecological track the planet is heading down. But something else attracted me about the early Save The Whales campaign. They were aware of a kind of resonance their mission had with the great American masterpiece of literature, Herman Melville's Moby-Dick, or The Whale. One of the earlier names for the campaign was actually Project Ahab. They recognized a sort of humorous irony in their determined quest to save the whales, much like the obsession of Melville's Ahab with the destruction of his nemesis, the Great White Whale. Furthermore, if you look at the crew of brave Warriors of the Rainbow as they called themselves, many of them were, characteristic of the era, very musically inclined. They often sang together, performed together at fundraisers (along with Country Joe McDonald on occasion), celebrated with music, and even experimented with interspecies musical communication. That seemed like all the right ingredients to me for a Central Works Method Musical: a good argument, a great narrative foundation, and a way to bring live music into the mix." 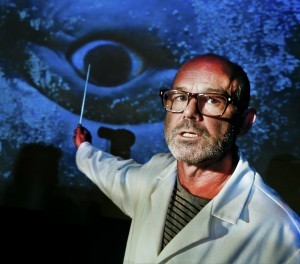 Clive Worsley as Dr. Sponge in a scene from
Project Ahab; or, Eye of the Whale (Photo by: Jim Norrena)

Project Ahab; or, Eye of the Whale is an extremely ambitious project that doesn't always hit its mark. Whether due to the enormity of its topic, the good intentions (and naivete) of its younger characters, or the downward spiral of disillusionment that leads to its dramatic climax, one leaves the Berkeley City Club with the feeling that the creative team may have bitten off more than they could chew with this particular theatrical adventure.

Despite the excellent musical direction by Ben Euphrat (four out of the five actors perform on a variety of musical instruments) and the expert work of Gregory Scharpen (whose visual projections and sound design allow the audience to see and hear things from a whale's perspective as well as from that of humans at sea), there are moments when it feels as if the play is overwhelmed with the demands of exposition, power struggles, and the ongoing tug of war between a group of young idealists and an aging fanatic seeking vengeance against a modern Russian whaling ship.

The action takes place in 1973 as Izzy (Caitlyn Louchard) travels from New Bedford, Massachusetts (once the most important whaling port in the world) to Vancouver, B.C.. Along the way she stops at a commune where she meets Cree (Sam Jackson), a professional photographer who claims to have taken the Pulitzer Prize-winning picture of Phan Thi Kim Phuc (the terrified, nude Vietnamese girl running in pain from her village, which had been bombarded with napalm on June 8, 1972). 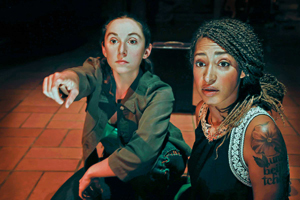 Caitlyn Louchard and Sam Jackson in a scene from
Project Ahab; or, Eye of the Whale (Photo by: Jim Norrena)

After dropping LSD together and sharing a night under the stars, the two women join the crew of the Rainbow Warrior II, traveling the ocean in search of a villainous Russian whaler. As their ill-fated voyage progresses, the crew's weaknesses become increasingly apparent. 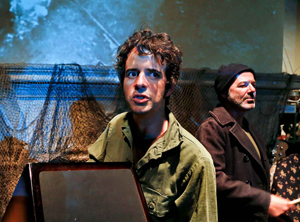 Michael Barrett Austin (Hunter) and Clive Worsley (Captain
Franklin) in a scene from Project Ahab; or, Eye of the Whale
(Photo by: Jim Norrena)

What Graves's script does well is to show what happens when people with no idea of what they're getting into sign up for a job whose requirements far exceed their capabilities. Political correctness and the desire to join a worthy cause can be noble sentiments. However, becoming trapped in the seductive, life-endangering vortex of a colleague's manic, cult-like behavior definitely has its downside. 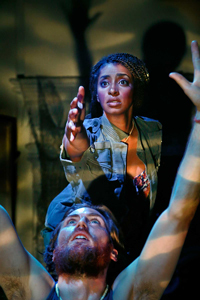 Ben Euphrat and Sam Jackson in a scene from
Project Ahab; or, Eye of the Whale (Photo by: Jim Norrena)

Under John Patrick Moore's direction, the five-actor ensemble gave their all (both musically and dramatically) to the production. I was particularly impressed by Reenie Charrière's scenic installation depicting a white whale that hung from the ceiling.