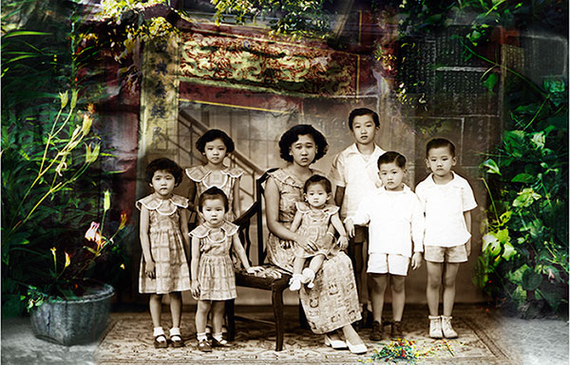 "Bo Suerte" -- Monica Ong Reed's mother's family portrait presents her disguised as a boy (second from the right) so that her grandfather would not lose face for having so many daughters.

Nathan Gauer: Let me begin by thanking you for your time and saying congratulations. Your debut poetry collection, Silent Anatomies, was recently selected by poet Joy Harjo as the winner of the Kore Press First Book Award and will be released March 1, 2015. She wrote that Silent Anatomies is, "One of the most unique poetry collections. It's kind of a graphic poetry book, but that's not exactly it either." How would you describe your own debut?

Monica Ong Reed: Silent Anatomies is a literary hybrid, not only in its use of text and images, but also because it addresses the hybridity of cultural identity, the way our bloodlines and family narratives are deeply interwoven, extending in these poems from China to the Philippines and the U.S.A. It's definitely for those who are adventurous in poetry, particularly its intersections with visual art, the medical humanities, and the Asian-American avante-garde.

NG: One of the first things readers will notice when reading Silent Anatomies is how boldly it experiments with form, weaving art, photography, graphic design and poetry on nearly every page. Can you tell us a bit about how you developed such a unique hybrid voice as a poet and visual artist?

MOR: My writing is informed by my art background and professional design practice, so I often think about how we encounter texts in everyday life, for example, the promises suggested in objects like medicine bottles.

Many of the works in Silent Anatomies emerged from art installations that utilize medical ephemera as a way to frame and question the power struggles that play out in decisions about our health and our bodies. While I could write a straight text about the millions of baby girls that go missing due to gender preferences entrenched in Asian culture, there is something visceral about reading a poem embedded in ultrasound images ("Catching a Wave"), how it captures that mysterious "in-between" state of life, its ghostly figures and the way it mimics the temptation to "write in" one's ideas onto others' bodies, which are sometimes "erased," in this case, through gender-selective abortions.

From "Catching a Wave," an ultrasound elegy for the millions of girls gone missing due to gender-selective abortions.

NG: Here's one of my favorite Rilke quotes that I couldn't help remembering while reading your work: "And yet they, who passed away long ago, still exist in us, as predisposition, as burden upon our fate, as murmuring blood, and as gesture that rises up from the depths of time." Can you talk about the role that a variety of histories -- both official and silenced -- play in your work?

MOR: The thread that runs throughout the book is the phenomena of "cultural silences," often rooted in shame: Shame about bearing daughters, which is why my mother was disguised as a boy in several family portraits, so that my grandfather would not lose face. Shame about my aunt's deteriorating mental state, which my grandmother attributed to her being possessed by spiritos, which left her undiagnosed and untreated for years. As the daughter of an immigrant physician, I grew up among whispers, overhearing the stories of those who sought my father's medical advice, mostly in secret for fear of losing face. At the same time, it is also about the erasure that occurs through the inertia of colonization, immigration or aging. I want to invite readers into this complex lineage, much of it fading, with the remains collected here as documentation of nomadic heritage, resilience and quiet devotion.

NG: What contribution do you hope your work might make to the conversations on race in North America in 2015 and beyond?

MOR: I want to create dialogue about how cultural silences influence the health-seeking habits of families in minority communities. Social stigma about issues like mental illness and domestic violence makes it difficult for people to report or seek mainstream health services. Sometimes families struggle with the lack of language translation or are unable to find culturally sensitive health providers who take into account other beliefs or systems of care such as Chinese medicine.

Studies claim: "Asian-American women have one of the highest rates of depression and suicide among all racial/ethnic groups of women," (JK Cheng, Asian Am J Psychol. 2010 Mar; 1(1):18-30). We can't "achieve" our way out of this, and while the health system is slowly making efforts to be more culturally inclusive, it's hard when stories go untranslated and underreported.

My work is also a call for creative responses to cultural bias. In my medicine bottle series, I recall my grandmother's saying about birth celebrations: "There are no fireworks when girls are born." In another work, I quote a proverb: "If you have white skin you can cover 1,000 uglinesses." Skin whitening is a multi-billion dollar industry in Asian countries, despite potential health risks, and yet, I question why we continue to participate in the privileging of whiteness, rather than celebrating our diversity as human beings. It's clear that there is no national heritage that has not been shaped by the bias of its times. Yet we know our silence will not protect us, as Audre Lorde once admonished. It is in our refusal to be silenced, in pushing back against invisibility that we can discover power we never thought we had. My work is a challenge to this new generation to break all binaries, to reclaim how we are defined, and to write ourselves a new culture that can celebrate our equality as human beings.

NG: Here's a basic (and perhaps even naïve) question: In North America, who is poetry for nowadays? Who is your poetry for?

MOR: It really depends on whom you ask. For some, it's about self-reflection or expression of feeling. But for others, poetry is a form of survival, a way to process the hostility directed at our bodies, our sense of belonging. People tend to go about their lives in socially segregated circles, which are the very blinders that make it difficult to see things from other peoples' shoes. Poetry is a gateway to shared empathy, a way to break down the blindness of privilege, and creates a space for all voices to be heard.

Beyond the page, I hope to form partnerships with APIA health organization to create poetry readings that can connect the community with vital health resources. Community engagement is critical for this art's survival, and also one way art can save lives.

NG: We seem to be living in an age in which it's not uncommon for people to avoid or forget to ask basic human questions about life and death. What questions do you hope your readers will carry with them after reading Silent Anatomies?

MOR: How do we live into our identities beyond binaries, i.e., male/female, white/colored, insider/outsider? What does it take to create a culture of genuine equality and respect? This has come to the fore for me now as a parent constantly weighing the consequences of cultural messaging that we bring into the home. We are all essentially hybrids, complicated collages of the people and places that have played a role in the maturation of our own voices as human beings -- media sound bites don't have time for that complexity. So it is really up to us to keep things complex -- to make space for new possibilities in empathy.

NG: What are some of your creative influences?

MOR: For years I have been deeply affected by the work of Claudia Rankine, author of Citizen, for her boldness and powerful relevance. I also appreciate the work of Audre Lorde -- most notably her essay on "The Transformation of Silence into Language and Action" -- as well as Douglas Kearney, Anne Carson, Wendy S. Walters, Theresa Hak Kyung Cha, and Cathy Linh Che -- I could go on. I admire their ability to bring the personal and political together while innovating with language(s) in a way that makes me care so deeply for other human beings.

My creative life would not have blossomed had it not been for Kundiman, an organization co-founded by Sarah Gambito and Joseph Legaspi that fosters community among Asian-American writers. I feel so fortunate to make work among artists who are so engaged, generous, and nurturing of this generation's new voices. 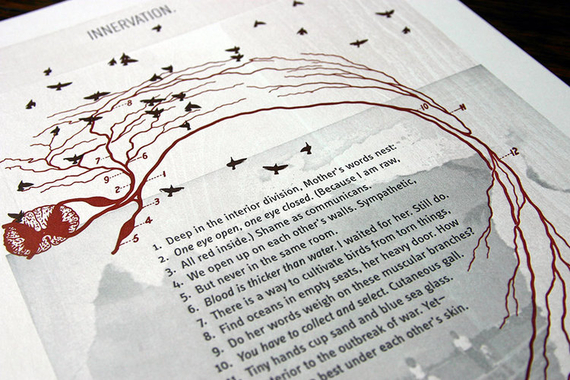 "Innervation" -- Letterpress edition -- This is a poem collaged with an anatomical diagram and photo archives that is available as a limited edition letterpress broadside.

To order the book: http://korepress.org/SilentAnatomies.htm