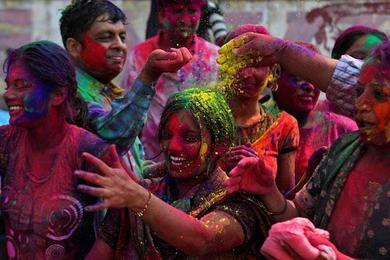 One of the most exotic holiday celebrations I've experienced is India's Hindu festival Holi. We were in Rajasthan and were delighted to receive an invitation from Maharana Arvind Singh Mewar to attend the HOLIKA DAHAN, a regal festival. The HOLIKA DAHAN ceremony was held at the Zenana Mahal, City Palace Complex, in Udaipur, complete with prayer offerings, folk music and dancing around a bonfire on the evening of the first day. Frequently, I am asked about the meaning of this colorful holiday and business implications in modern times. My observations are:

What is the Holi Festival? Holi celebrates the arrival of springtime and occurs in late February or March--this year held on March 23 & 24. Holi's first day celebrates the triumph of good over evil, while the second day is considered an expression of universal brotherhood. Holi begins with bonfires during the night of the full moon of the Hindu month of Phalguna. On the second day of the festival, Hindus throughout India and worldwide gather in the streets to celebrate this "festival of colors" by throwing brightly colored powder paint (gulal) and scented water at friends and strangers. Along with general partying, the day is meant for rejoicing about the beautiful colors and new life that arrive with spring. 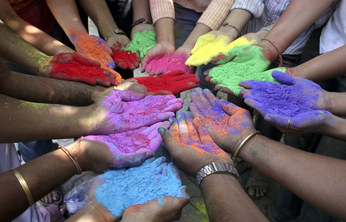 Hindu Mythology & Traditions:
The traditions of Holi come from several legends in Hindu mythology. The public bonfire lit during the rising of the full moon is said to resemble the burning of the demoness Holika. This legend holds that the demon king Hiranyakashipu forbade his son Prahlada from worshiping the God Vishnu, but when Prahlada continued, he became furious. Hiranyakashipu challenged Prahlada to sit on a burning pyre with his aunt Holika, who was gifted with immunity to fire. Surprisingly, Holika was burned to death for using her power for evil, while Prahlada survived unscathed due to his prayers for help and faithful devotion to Vishnu. Another legend associated with Holi is about Krishna, the dark-blue skinned God. When Krishna is rejected by Radha, a fair skinned girl, Krishna's mother tells him to color Radha's face. He does, and they become a happy couple. Holi's colorful, frivolous nature also resembles other tales of the God Krishna playfully splashing the village gopis (cowherds' wives and daughters) with water and colors.

Tips for Business Visitors:
Business visitors to India must appreciate that on the second playful, frivolous day of Holi, when lively people swarm the streets, sprinkling colored water and chalk on each other, this closes down traffic and offices. If you will be in India as a business traveler during this celebration, I encourage you to enthusiastically participate, as it will build trust, inspire respect and create long-lasting business relationships with your Indian counterparts. To help create an exhilarating Holi experience, consider these intercultural and international etiquette tips:

In addition to honoring Hindu culture, the Holi festival serves as an opportunity to loosen the restrictions of social codes and brings people from all walks of life together. On the second day, caste, class, age, and gender may be disregarded depending on your location, while almost everyone joins the cultural celebration. A popular phrase reflecting this positive attitude is: bura na mano, Holi hai, or "don't be offended, it's Holi!"