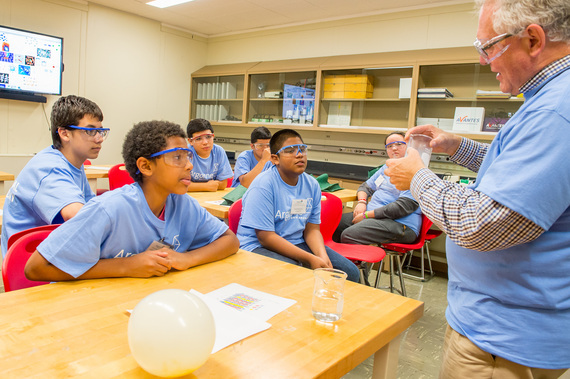 In putting together a new framework for the state's history and social sciences curriculum, the Instructional Quality Commission of California's Department of Education has received nearly 500 pages of comments and suggestions on how to best write textbooks for K-12 students.

Most comments have come from educators and from experts in history, anthropology and related disciplines. They help shape perspectives on how to include information about the Nuremberg trials into a framework for the classroom, whether to choose more gender-neutral language on the history of women's voting rights, how to explore climate's role in a society, or whether "imperial" is an apt word for U.S. economic policy.

"Please include Larry Itliong," reads one textbook review comment, referring to the Filipino-American farm labor leader whose commitment to the 1965 Delano Grape strike deserves the same recognition as that of Cesar Chavez or Dolores Huerta, both textbook-worthy Hispanic leaders themselves.

"Acknowledge the systemic rape of Vietnamese women by South Korean troops during the Vietnam war," reads another. Between 5,000 and 30,000 children of mixed Korean-Vietnamese ancestry, called the Lai Dai Han, live as outcasts in the country and have received no official recognition or apology from South Korea. U.S. Undersecretary of State James K. Glassman and other political leaders have joined historians and academics in speaking out against this institutionalized rape that was committed by thousands of South Korean soldiers during the Vietnam War.

To spend even just a few minutes with these ideas underscores what a monumental undertaking the California process involves, and the stakes are higher here than they would be elsewhere. As California's population dwarfs most other states, publishers that write textbooks to meet California standards will likely introduce them in other education systems in the U.S. This is the same reason why ideologically charged decisions from the Texas school board became a national issue.

The nationwide impact of California's choices helps explain why the battle over how to define the Indian subcontinent -- as either South Asia or India -- and describe the region's political and multicultural history (along with controversial concepts like the caste system) has touched a raw nerve for so many concerned groups. When it comes to questions of diversity and inclusion, the facts we teach our children and how we interpret those facts inform student identities and wider society.

History, its interpretation and cultural competency

Textbook reviews are routine, but this year's California process has made headlines both in the state and around the country. The hottest controversy is an impasse on what to call the region that includes India as well as Pakistan, Bangladesh and other nations who shared an experience under colonial rule. While India is by far the largest country in the region, its neighbors have their own distinct identities and some academics argue South Asia is a more inclusive term.

Several Indian-American and Hindu groups (and it's critical to remember the terms aren't synonymous, despite what persuasive activists might tell you) have launched a passionate campaign to "protect India." Community activists and social media strategists have made the issue more visible to the public, but advocacy organizations like the Hindu Education Foundation and Uberoi Foundation have submitted many of their objections and corrections directly to the Instructional Quality Commission. "This edit conflicts with another submission" is duly written in the document's notes column, on page after page, on this topic for 6th- and 7th-grade students.

While the comments seem unintentionally ironic, it is fair to say that California officials are far from amused. Most educators want to create learning environments that allow cultural competency to thrive, instilling their students and the education system itself with a lifelong commitment to diversity and understanding. Administrators and board members may see these edits as a "conflict," but in the lives of young people whose families immigrated here from India, Pakistan, Vietnam, Japan, or elsewhere, the information they are being taught in school can translate into conflicted identities and widening circles of tension.

Those identity questions affect many Californians, not just those with South or East Asian heritage or a stake in defining Hinduism among their co-religionists. California's incredible diversity means students navigate a multiculturalism reflected by the state's 38 million residents and 6.2 million students in more than 1,000 public school districts. Today, more than half of those students -- 53.3 percent -- are Hispanic. More than a half-million Asian students join them. An additional 2.4 percent of the students in California classrooms are Filipino, 6.1 percent are African American and just a fourth are white.

So if more than half of the students are Hispanic, why do textbooks fail to reflect the complexity of their own cultural dynamics? Why does the same hold true for students of Filipino, Vietnamese and other heritage groups weighing in on the book issue?

Nowhere are the omissions -- or in some cases, the distortions and misconceptions -- more obvious and unacceptable than they are for the students who now make up the Hispanic majority in California classrooms. The Mexican American Digital History Project and its supporters have been leading the fight to better include Mexican-American history in California's textbooks, providing the long-overdue curricular experience Hispanic students and their classmates deserve. After over a year's work, the campaign succeeded in getting the Quality Instructional Materials Commission to include issues of Mexican immigration to the US, discrimination faced by Mexican-Americans during the Great Depression and more recent issues faced by the community to its curriculum recommendations.

While these changes have finally been accepted, there will always be more work to do. The ongoing challenges over California's South Asia textbook debate and its implications for how to interpret historical facts in nuanced and contextual ways, demonstrates how difficult it can be to arrive at consensus -- particularly when passionate advocates are driven by deeply held conviction that arises from religious or cultural tradition. The high-profile battles in Texas and other states, as well as similar claims made about historical issues in the Middle East or Germany, show how easy it is to politicize the classroom by influencing the process along partisan lines. Our students deserve better.