Just when I thought we were done with it not being considered cool to show your strength as a woman, or to be outspoken or metaphorically burn your bra (though bras out again, I am noticing), Hillary cried and the pundits (what do they know anyway) say she may have won an election because of that.

Forgive me for going back a few weeks in this hot electoral cycle, where we seem to be jumping from sex to race to wallets rather breathlessly but I don't think we're quite done with figuring out what exactly happened up in New Hampshire.

It seemed like it was getting ok again to reveal your hand -- to be strong and beautiful, to love power and clothes too (though I wish Hillary loved them more). Then I heard all the exit interviews with women after the vote in NH, where people are living free or they die (check out their license plates) and the natives are supposedly the rugged individualists that the founders were counting on to make our country great.

Every single woman polled who did vote for HRC mentioned the "teary eye" moment as being decisive in their 11th hour decision.

Contrary to this warm and fuzzy retro thing, in Culture, strong women are Back. The Metropolitan Museum lists a Superhero theme for their spring fashion benefit. 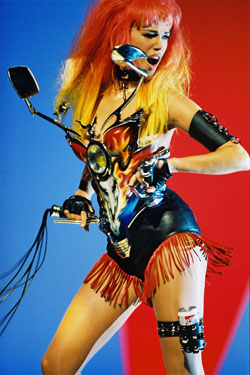 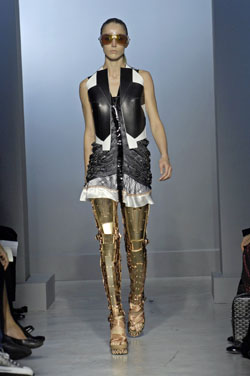 Nicolas Ghesquiere for Balenciaga 2007, Courtesy of firstVIEW And last week I caught a very cool, kitsch-y play about Amazons and Their Men which I went to see for the title, when I got there wanted the sexy costumes and when I left wanted some of what the leading lady had: the ability to think big, (like Simon Rodia of the Watts Towers .) A play-a-clef about, Leni Riefenstahl's homage to an earlier work by Kleist Penthesilea on the eve of WW II, the two gorgeous babes, identified only as The Frau and The Extra, (in killer Grecian beige silk pleated dresses, definitely no bras) dominate their two men called The Man and The Boy (who are actually having a thing with each other). 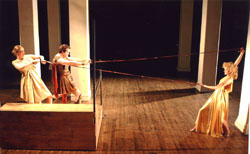 Heidi Schreck, Brian Sgambati, Rebecca Wisocky, courtesy of Carl Skutsch Male artists have historically touted the Amazons: the great sculptors all the way up to Wonder Women and even more contemporary filmmakers (the Amazon Women on the Moon movie) and perhaps it is easier to admire them from afar. Though he is at pains to stress his titles don't necessarily mean anything special, Playwright Jordan Harrison is no exception. "...increasingly I felt the pressure to be a writer who says something about the world we live in. So I was drawn to the subject of an artist who was both engaged with -- and in other ways terribly disengaged from -- her world".

As a moral cipher who truly aspired to the physical perfectionism of the Aryan-obsessed Nazis, Reifenstahl is rightly castigated for her closeness to Hitler and Goebbels, but no one has ever disputed her technical wizardry or her visual ambition, her media savvy or her ability to work the system in her favor; she was the consummate politician.

You remember that the Amazons (whose existence is still in some dispute) were first mentioned by Homer in the Illiad, mated only with the males they had vanquished in battle (maybe even cutting off one breast to be better with a bow and arrow) and then kept only the girl babes and sent everyone else packing. (In nature, fire ants do this sort of thing too and one wonders if maybe Homer got the idea for the Amazons from those pesky bugs crawling across his papyrus. )

The theme touched a nerve, however so the Greeks kept the myth alive: after losing the battle of Thermodon, the Amazons were imprisoned on boats but overthrew their male captors and then found themselves drifting near the Black Sea; the Scythians tried to get them to hang around, but they could not tame them either. Later on, the trail gets a little colder, and though some scholars think they ended up in the Russian steppes, it's strictly anecdotal.

The Wounded Amazon Oddly enough, instead of having a bum rap for infanticide and homicide, the Amazons have spawned an adjective with a positive, or certainly powerful connotation. Yet our female leaders are wary of publicly owning this kind of power; since the sixties, women have shied away from being stereotyped as strong even if they were. (There is also some evidence that powerful women don't even have much time anymore for their men; examples abound in the arts, but politics the media and sports, also have their share.) HRC seemed exceptional being comfortable with her power, and this relentless quest for still more, her one achillies heel being Bill. (I'm sure there were times she did want to murder him and they certainly seemed to have shed any vestiges of a conventional marriage.) But instead of being lauded for this candor, she was singled out as some kind of freak of nature, much like Bad Girls and Mean Girls, two other groups of media-hot women; in fact every time a woman is designated as powerful there is a suspicion, not always articulated, that there is something WRONG with her--that she isn't a good wife, or a good mother, a bad friend or a nice person.

This fine line we walk between vulnerability and asserting ourselves, between desirablity and wearing sweatpants, between loving our husbands and sons and wanting to murder them (confession: all four, at times, more than I like to remember) between paying attention to them or being selfish: this is the delicate dance women do all their lives.

Funnily enough, the part of the Amazon culture that is very much alive is male-neutrality, as women routinely use male seed for fertility but have nothing to do with the father.

Unlike the Amazons, I love men and it has been a tricky two-step navigating the whole passel of them I seem to have collected: husband, four sons, male dog, and late breaking step grandson to whom I am already in thrall as well as assorted male friends past and present with whom I am not always in sync. I always thought there was no use in crying over spilt men, or spilt elections but maybe this whole incident has proven those of us who were trying to tough it out as wrongheaded.

To a woman, the New Hampshire gals felt a previously unfelt sisterhood with HRC, It's downright exhausting to claim to be impervious to wanting to be liked, and what more giant referendum is there than an election except for the Oscars. (op cit Sally Field, " You like me, you really like me!). Still, wouldn't you be surprised if Condi teared up as she was testifying in front of Congress? Maybe it's a (mostly liberal Dem) Democratic thing, to let your hair down and get weepy.

A good cry is always a tonic, it's true, but it's not very Amazon-like. Seeking common ground with my sisters in New Hampshire, I'm hoping that it was really because they liked the idea of her lifting all she-boats from the icy waters which surround them to a higher place, one where if HRC can cry, (over possisbly losing an election OR her man) well, then, so can they.