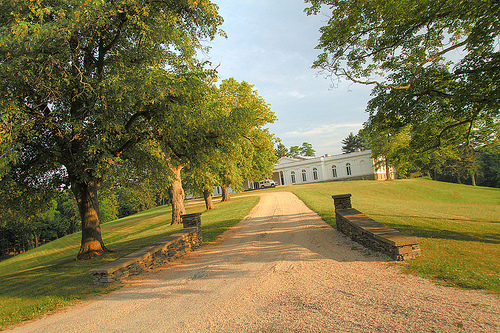 The estate. Photo (CC) Canon in 2D via Flickr.

Supposedly, the Chelsea Clinton wedding will take place at the Astor Courts part of the old Astor estate, Ferncliff, on the Hudson, once an enormous compound. The home (see the New York Times slideshow of the spectacular fix-up) is owned by Arthur Seelbinder and his wife Kathleen Hammer. It was part of a bequest the Astors made to the Catholic Church, and is still the site of a Catholic nursing home on another part of the original parcel.

Hmm. It seems seems nigh on impossible, if you have ever tried to get to upstate NY at the drop of a hat. I called the Beekman Arms, the largest historic inn in the area, to see if they were booked for weekends earlier in the month. After being on hold for 20 minutes, I gave up. Though I could have persisted, I do not want to have the former POTUS and FLOTUS angry at me -- or spoil Chelsea's big day.

Instead, I thought I would focus my attention on the somewhat checkered career the property has had as part of the land that was home to various Astors, beginning with John Jacob Astor. It was also where his son Vincent Astor took his first bride Helen Huntington in 1913. Their original house was then torn down by Vincent Astor's second wife, Minnie Cushing, and they moved into the guest house--also sometimes called the playhouse, now called the Astor Courts--on the property that White said had been inspired by the Grand Trianon at Versailles. It has an indoor tennis court, a pool and many gracious receiving rooms that have been impeccably restored. 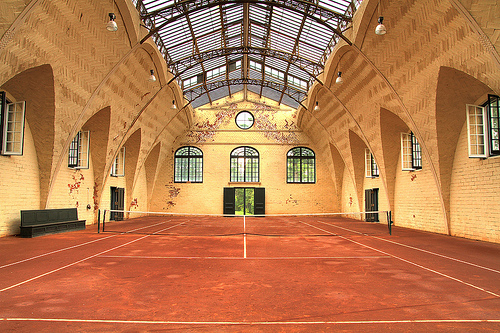 The tennis court. Photo (CC) Canon in 2D via Flickr.

Ferncliff was for spring and fall. It was never as marvelous for Brooke as it had been for her predecessors or as it remained for Vincent. There were the flies of course. And there was the sound of trains down by the river, which woke her at night.

But it was more than that. Helen, Astor's first wife, apparently would come for lunch and say things like,

Oh, this chair used to be over here... Wasn't that table there?

How inconvenient to try to be nice to the ex--who was thought by some to have been gay , even as Astor himself was reported to have been stricken by the mumps at the actual ceremony (which made him sterile)--only to have her constantly reminding you of the glory days.

After Vincent Astor died of a heart attack, according to Kiernan, Brooke Astor held onto the house partially because Astor was buried there, but when she couldn't find a buyer for the whole parcel, she gave the land where he was buried as well as other structures to the Catholic Church, as per his instructions. She then had his remains moved to the cemetery in Sleepy Hollow.

Chelsea Clinton's fiance, Marc Mezvinsky, is Jewish. I don't know what the plans are for any religious aspect of the ceremony, since Chelsea Clinton is not. But I couldn't help but imagine what the spirit of Vincent Astor--even way over at Sleepy Hollow--or any of the various wives, or the nuns for that matter, might feel about a huppa being constructed at the family bastion of old-line wealth and privilege.

Let's hope those pesky trains, the dreaded summer flies, and the current heat wave or, indeed, the press, do not encroach upon the Clinton-Mezvinsky wedding (nor the more toxic Astor curses of mumps or serial monogamy) and that if Mark steps on the glass, as is the tradition in Jewish weddings, the ghost of Helen does not come out and pinch him for leaving shards on the rug.