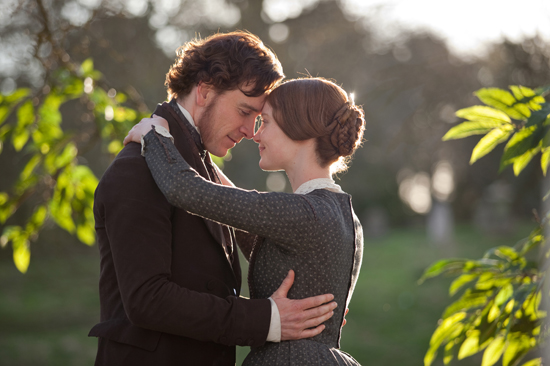 Another version of Jane Eyre is an occasion for celebration, both an opportunity to revisit the previous versions and even more delightfully, the complicated, romantic novel by Charlotte Bronte that is their dramatic underpinning. What an excellent reminder that certain historical heroines deliver the goods to us as much as any modern girls: Bronte could have pitched her story as Teach, Pray, Love.

Did the world need another iteration of Jane Eyre? There has been one almost every decade along with radio and stage plays. As a result, there is probably no orphan more famous than Jane except perhaps David Copperfield. Netflix lists no less than 8 available versions. (See also the wonderful site Enthusiasts Guide to Jane Eyre.) In addition, Jane has been perpetually picked over by critics, feminist scholars and academics even as she is held close by millions of readers. 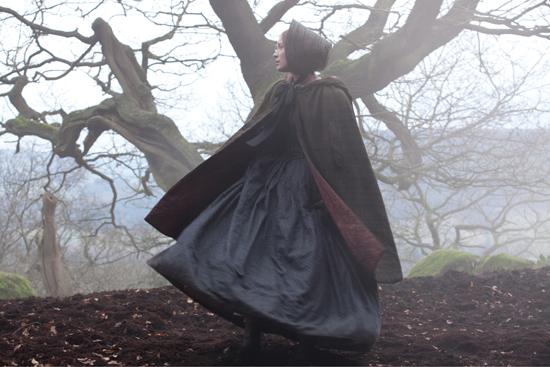 Almost everyone who comes to know Jane identifies with some aspect of her tortured journey to womanhood, even if by degree. After a childhood of emotional and physical deprivation, thinking herself destined for an ascetic life, she develops a huge crush on her (married) boss, gives him up when she learns the truth and casts herself out into the world, impoverished. But her scrappiness, learned early and well, serves her and she is rescued by a family who turn out to be long lost cousins and with whom she shares a love of literature and religion. Her cousin proposes marriage and joining him as a missionary as she is so suitable, but Jane cannot give up her tormented ghost and journeys to be by his side, only to learn that he has become a blind widower who is now free to marry her after all.

A neglected orphan, Jane is feisty and knows her own self at the outset. She is willing to do verbal and emotional battle with her abusive aunt, do physical battle with her cousins, fall madly in love, resist temptation, fulfill her curiosity, take charge of her career. She understands children. She is natural, as opposed to flighty and vain, intellectual and educated, poor, forced to rely on her wits. 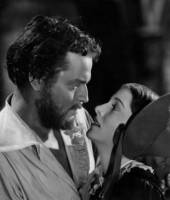 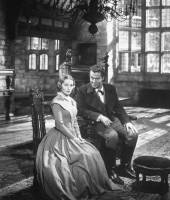 The new version starring Mia Wasikowska and Michael Fassbender, directed by Cary Fukunaga, did not in any way usurp my affection for the 1944 Orson Welles-Joan Fontaine version in whose credit roll I found not only Aldous Huxley (co-screenwriter) but Bernard Herrmann (music) and William Pereira (set design, also architect of the LA County Museum of Art and the Transamerica Tower in San Francisco) and Elizabeth Taylor in a small role as Helen, Jane's Lowood Orphanage best friend. Fontaine played Jane with a soupcon of Joan of Arc, with an ethereal, other-worldly quality and Welles is the Byronic bad boy, the camera and lighting lingering on their tormented eyes. The back lot of Fox and the chiaroscuro of the black and white are even more gothic and frightening than the successively more realistic location versions that have emerged (e.g. when he asks her to marry him, a thunderbolt cracks the tree next to them wide open).

There is compression in all of the films (the Masterpiece Theater and BBC mini series more faithful to the book) but the pivotal scenes remain the same: Jane is accused (falsely) of being a naughty, wicked liar. She has the presence of mind to stand firm in denying these accusations but is banished to Lowood by her harsh Aunt, is forced by Brocklehurst to stand on a stool in ignominy, her saintly best friend Helen dies of consumption next to her in bed, she gets a position at Thornfield, Grace Poole protects a mysterious creature, Jane and Rochester bond, Jane flees learning of Bertha's existence at her wedding, Jane returns to Thornfield to find the house in ashes, Bertha dead, Rochester blind, and reader, she marries him. Often the chapter about her stay with her cousins and her religious agonies is cut or glossed over, though not in this current version which attempts to stay truer to Bronte's concerns. 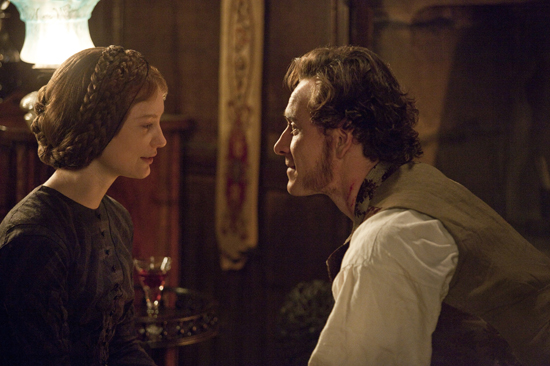 The Janes have upper lips ranging from full to very full. The Rochesters, eyebrows more or less brooding, both appealing in spite of Bronte's original determination to make both Jane and Rochester unattractive to everyone but each other.

Bronte makes the point that love is made up equally of physical passion and a meeting of minds, which in the Victorian era was a somewhat radical notion. Rochester finds in Jane a respite from the socialites he is mostly lumped with; they like to talk to each other. But he warns her of her inexperience:

"You will come some day to a craggy pass of the channel where the whole of life's stream will be broken up into whirl and tumult foam and noise: either you will be dashed to atoms... or lifted up... by some master wave into a calmer current."

Jane leaps into love with abandon anyway, thinking at first she has him in the palm of her hand:

I knew the pleasure of vexing and soothing him by turns... beyond the verge of provocation I never ventured... I liked well to try my skill... I could meet him in argument without fear...

She soon enough learns that he is her equal in resisting love, even (confessing later) by inviting the beautiful and imposing neighboring fortune hunter Miss Ingram just to make her jealous. Normally very much on guard to not let her desire get the best of her, Jane chides herself for her self-delusion:

"That a greater fool than Jane Eyre had never breathed the breath of life: that a more fantastic idiot had never surfeited herself on sweet lies and swallowed poison as if it were nectar."

Bronte may have been sexually repressed, as some critics would have it, but she insisted that Jane be plain -- and that she could still be interesting. Her rival is at first feared for her beauty and wit and talent. But eventually Jane realizes:

"She could not charm him. To watch Miss Ingram's efforts at fascinating Mr. Rochester; to witness their repeated failure...vainly fancying that each shaft launched hit the mark.... that continually glanced off from Mr. Rochester's breast and fell harmless at his feet might, I knew if shot by a surer hand have quivered keen in his proud heart."

But when she finally learns Rochester's truth, she hesitates for only a moment:"Meantime, let me ask myself one question-which is better? To have surrendered to temptation; listened to passion; made no painful effort... among the luxuries of a pleasure-villa; to have been now living in France, Mr. Rochester's mistress; delirious with his love... Whether it is better...to be a slave in a fool's paradise... or to be a village school mistress, free and honest in... the healthy heart of England." Jane thinks it's God who has directed her to the right choice. Finally, she is rewarded for not straying, her fatal attraction landing her in a heap until she is finally able to consecrate it and have babies:"I hold myself supremely blest... because I am my husband's life as fully as he is mine. No woman was ever nearer to her mate than I am: ever more absolutely bone of his bone and flesh of his flesh." 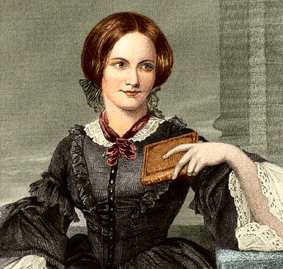 Bronte, a clergyman's daughter, held fast to her religious faith in spite of its obvious disconnect from the passionate love she also wished for. She and her equally talented siblings (Emily: Wuthering Heights, Anne: The Tenant of Wildfell Hall) invented worlds of their own fabulous construction while living harsh, ascetic lives in stark Yorkshire and then ended up writing gothic-inflected novels about obsessive love. All of them eventually died of TB, brother Branwell already dissipated by opium and alcohol and a failed career as portrait painter.

France and the french are held up as everything wicked, naturellement, Rochester's former mistress, Cecile, as beautiful and faithless and not very smart, Adele her daughter as equally vapid if endearing. Bronte had in fact fallen madly in love with her married mentor in Brussels where she was studying french. Eager for male approval, as she finally geared up to write, Bronte wrote to England's poet laureate of the time for advice. He did not hesitate to warn her that literature should not be:

"The business of a woman's life... the more she is engaged in her proper duties... the less eager [she will be] for celebrity."

Mistress or Schoolmistress? I venture that many of us would have run happily off with Rochester to the south of France. Jean Rhys's novel Wide Saragasso Sea imagines the preamble to Jane Eyre; it's even more fun to imagine what might have become of Jane had she chosen to accompany him. This commingling of sex and smarts although wildly unconventional was not entirely unknown in London literary circles at the time: George Eliot (Marian Evans), Bronte's contemporary, was living out of wedlock with George Henry Lewis. But Eyre was out of touch with this "faster" world. 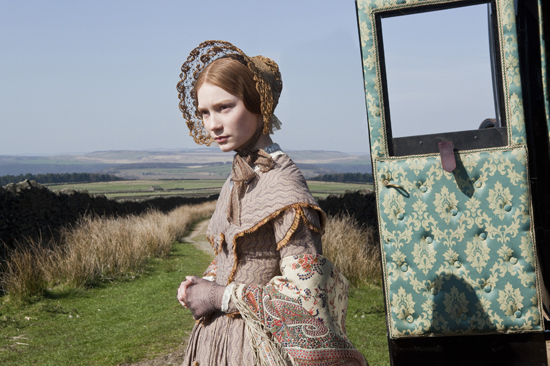 Jane is bold and the agent of her own destiny yet the catalyst for her actions is love, or want of affection. Still, the pleasure of rooting for such a heroine cannot be underestimated. Jane heads the list of heroines who have a rebellious nature -- one which also includes Scarlett (Gone with the Wind), Patricia (Breathless), Diana (Darling) Erica, (Unmarried Woman), Victoria (Red Shoes), Catherine (Jules and Jim) and others who linger in our memory.

In a pinch, we might ask ourselves, What would Jane do?

It's women's history month: tap into your inner Jane, a heroine for the ages.

Jane Eyre opens nation-wide on March 11th. The previous versions are available on Netflix and the novel on Amazon as well as at your local library.