It was while waiting on line at the will call behind a thirtysomething female bass player in a rock band and her composer boyfriend that I realized that Leonard Cohen was still speaking to all those who seek answers to the impenetrables.

The couple told me their fathers had turned them on to Cohen, but that they felt if he recorded a new album today it would be every bit as worthy.

I had put my 1973 Leonard Cohen Live Songs album in pride of place on the mantel, the one with the black and white picture of him smoking and communed with it (before the sold out Radio City Music Hall concert) and the youthful longing he so deftly channeled for so many of us.

Known recently for his spiritual artwork and for being Madoffed before Bernie even hit the Street by a voracious business manager, Cohen went back on the concert circuit because he was plum broke.

At the Music Hall last night, you would have never known that either Cohen or his adoring fans, young and old, had an economic worry in the world. The hushed, deco carpeted hall proved a serene and majestic venue for Cohen, the perfect get away from it all that everybody seems to want.

But to where? As he himself acknowledged midway through the set, there's really nowhere to hide anymore. 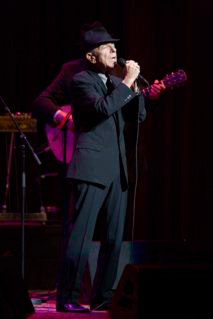 Cohen sang his standards and more, often beginning each one kneeling, his own homage to his deeply felt work, his signature fedora rakishly tilted at first to totally obscure his expression and then after intermission, to reveal the craggy, wise troubadour. There was even a whiff of the Chairman of the Board, Sinatra himself, who often used a hat too as a way to woo his audience.

But were his eyes mostly closed at the outset so he couldn't see how many of us had aged?People were bobbing and swaying, some mouthing the words, or singing under their breath, almost as if they were chanting with a guru.

On my right were two people who appeared older than me, on my left much younger. He is someone who still captures longing.

The set was tame and melodic, his version of backup singers more harmonic than Harlettes, his musicians, other than the marvelous guitar player from Barcelona, correct rather than passionate. But they were just following their charming leader.

I'm sure that Cohen at the Beacon had the intimacy that this performance lacked, but since other than Mick Jagger, I haven't been to a rock-ish concert in years it all felt a bit surreal.

Cohen still has the bedroom voice, the luscious, sexy Everybody Knows, no pyrotechnics needed instrument that has taught us about transfiguration and transformation and transmutation. But the post-minimal, hat -doffing delivery sometimes worked against the poetry, the former angst about misplaced love replaced by a serenity that made all those years of using him as a totem for our unrequitedness almost suspect.

Was this the same guy who had hold of our tortured hearts?

If it hadn't been for the father who brought his restless little boy with him in front of me or the drunken fan who was forcibly ejected two thirds of the way through for starting a fight, I would have slipped slightly into somnolence.

As it was, the reverence felt right, somehow. The Troubadours were known for their lyricism and intelligence and we could not have a finer standard bearer.