We all cherish our homes as the spaces in which we can relax and be ourselves. But what if your self is suddenly and irrevocably altered? Do you adjust to the house or the other way around?

To answer that question, I need only look at the personal backstory to Koolhaas Houselife, a quiet but astonishing film already lauded around the country that is screening next week at the Hammer Museum, in the fall at the San Francisco Museum of Art, and at the upcoming Venice Biennale.

In 1989--as yet another summer with four children under the age of 10 loomed--I contacted Helene Lemoine, an old friend from my days working for the French government who lived in Bordeaux. She also had young children. We agreed a house swap would be ideal--and a lot more economical.

Though our house in Los Angeles was pleasant, we got the better end of the deal, a beautiful turn of the century city house in Bordeaux and a country house in the Landes. It was a wonderful summer. But just under two years later, Helene's husband Jean-Francois had a near-fatal accident on the autoroute. For a while it was touch and go, but gradually his family, particularly his beautiful and stoic wife Helene, was able to nurse him back to life.

It was clear however, that he would never again be able to walk or do most things for himself. Instead of using this as a way to hide from the world, Helene and Jean-Francois, who continued to run the family-owned Sud Ouest newspaper, realized that they must adapt to their new circumstances--he could no longer navigate the traditional space of a vintage vertical home. They interviewed architects from all over the world and finally in 1995 commissioned Rem Koolhaas--at the time, not yet the starchitect he would become--to design a house for them that would both nurture the new iteration of the family but also challenge it to live differently.

Helene worked closely with Koolhaas, and Jean-Francois found a measure of delight and joy in the making of a house that was designed especially with him in mind.

"Absolutely. It was brief but intense," says Louise Lemoine, his eldest daughter, a filmmaker. 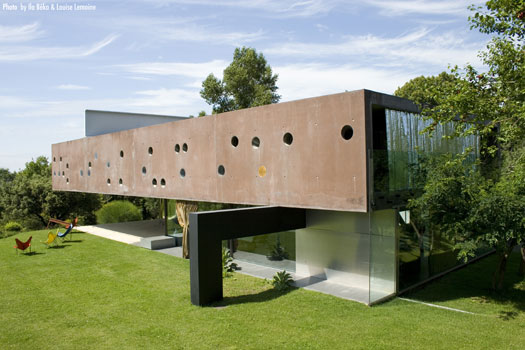 The house, located just outside Bordeaux, has become one of the most famous in the world. It was in an exhibition at the Museum of Modern Art in 1999 and has been photographed numerous times.

It is built around a central living space that moves up and down between the floors, an elevator without walls. The elevator made it possible for Jean-Francois to have mobility: the house moved for him rather than the other way around. And each area that did demand some participation from Jean-Francois in his wheel chair was customized so that he could have easier access. It instantly showed handicap ramps and traditional methods of dealing with physical infirmity as grossly restrictive and made one long for the day when these kind of resources could be available on a wider scale.

But what was it like to experience this house on a daily basis? And how might one communicate a little of that unique experience without falling into maudlin cliche? Louise and her co-director Ila Beka found a completely original way of telling the story: through the eyes of the housekeeper Guadalupe, who lived on the premises for seven years and was charged with maintaining this iconic structure. 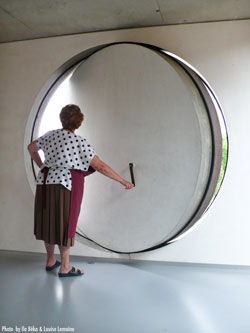 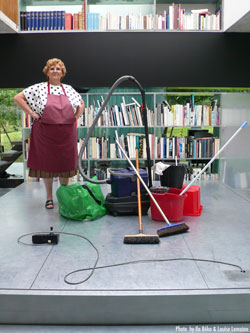 For Lemoine, growing up there was dramatic. "It was certainly the most exiting period of the life we spent there as we really felt involved in a building process," she says.

I remember quite clearly that during opening night festivities for the house the books were stacked in her room in a big pile, as there was nowhere to put them when they first moved in; I was already worried about her homework. And it must have been so hard in terms of privacy as a teenager when walls are everything.

"We had to learn very quickly to redefine what can be a "house" or a "home" in the sense that privacy had to be shared with the public life and image of this building," Lemoine admits.

You also had to whisper if you wanted to keep a secret. "My father lost a lot of his voice in consequence to his car accident, and so he expressed the desire to be well heard in the rest of the house from his bedroom in case he would need help," she adds simply. Her wry sense of humor is more evident in her charming choices in the film.

Koolhaas, who won the Pritzker in 2000--Helene remembers the jury visit to the house--is pointedly interviewed in a coda. Architects are often berated for their insensitivity to what actually goes on in their buildings or for their willful ignorance of such mundane things as maintenance or the demands of daily life--titanium and glass facades can wear dramatically, and Lemoine does not spare Koolhaas. But clearly the relationship between Koolhaas and the Lemoines was something special.

Koolhaas on the house.

If a man's home is his castle, in this case it was also his life support, a way of retreating to an environment that didn't fight him but that lifted him up--quite literally. Jean-Francois died in 2001. The family still lives in the house, which is still joyful despite the absence of the man who inspired its creation.

The film is available on DVD along with a series of subsequent works on experiencing other architectural icons in novel ways (Gehry, Herzog and de Meuron, Meier, Piano).