If you pass by the crowds around Marina Abramović as she stares deeply at a tablemate during The Artist is Present, her 77-day, 700-hour-plus performance piece in the grand atrium at the Museum of Modern Art, you will do yourself a favor. Quickly take a look at her amazing profile. But then go up to the sixth floor and see the wondrous, excellently curated exhibition that for the first time, really pulls all the strands of Marina's hair (often a strong subtext in her pieces, like Relation in Time 1977) together. Then, make your way back down to the atrium to pay your respects to a truly original artist. 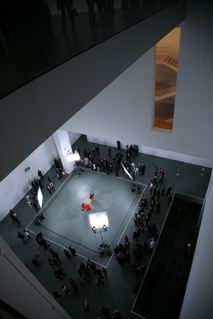 The Artist is Present (Photo by Scott Rudd)

It is a revelation. 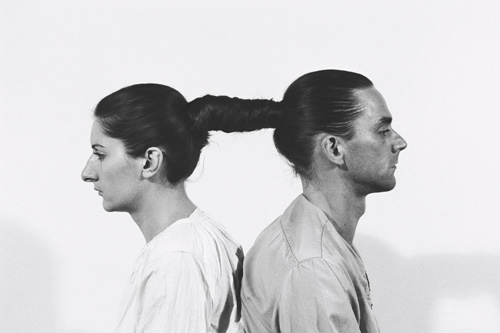 Women in the sixties and seventies -- so open, yet still so frightened. Belgrade-born Abramović took those fears -- of death, of male power, of vulnerability, of leaving ourselves open to pain -- and got to the bottom of them by literally facing them down. If you do a thing enough times, in public view, she seems to suggest, you can take the fear out of it.

Abramović, as a friend so wisely said, is about concept and endurance. 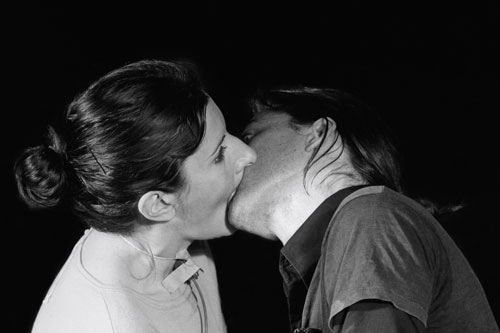 On a CD enclosed with the catalog, a virtual walk-through of the exhibition, Abramović tells the tale of her beginnings in Belgrade (she was born in 1946) from her first painting lesson at 14 years old, realizing early the process and not the result would define her art, that her performance's only goal was as a tool "to elevate the spirit of my audience" and that an audience's energy could inform and push her own. The narrative focuses on the self-described four stages of her career: as a solo performance artist, as a duo with her lover and partner Ulay, as an artist interacting with her audience, and as a mature--but again solo--performer revisiting her own life.

The first thing your eye is drawn to in the first gallery of the exhibition is the image of Abramović vigorously brushing her hair in a video, her very first, hanging from above. Art Must be beautiful, Artist Must be Beautiful (1975) is about "art having to fit the colors of the living room," as she says disparagingly. You know it's the same woman you saw seated placidly all covered up in long skirt and long sleeves at the table downstairs... and yet.

The younger Abramović was beautiful and not quite as voluptuous (hmm), but she and her avatars in this exhibit (many nude reperformance artists perform earlier works) are sexy, but real-looking women (and men). Not model-y, even though their bodies are just as important. Abramović is more about navel-gazing than navels per se, though there are some pretty ones--and also ones surrounded by painfully incised stars. She's an exhibitionist, but not in the way you are thinking. This is a woman who has truly made her body the temple of her art. And she has had to confront moral as well as physical fears--even trying out prostitution. 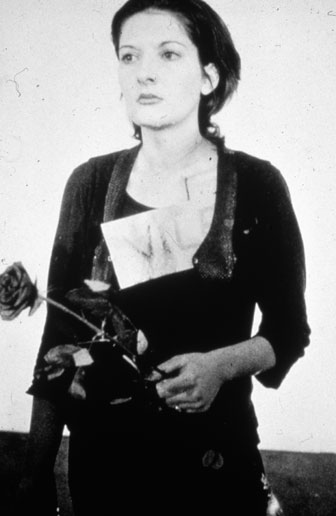 Then you might happen on the table with the batterie de abuse: chains of varying sizes, saws, guns, and packets of Trojans from Rhythm O I am the Object a piece from 1974. You see the beginnings of another theme in her work: torture, self inflicted or in this case, inflicted by an Italian audience that took her a bit more closely at her word than she would have liked. "These are the 72 objects," she had explained to them, "that you can use on me as desired." She remembers this as her most dangerous piece, a duration of six hours of torture, in which the public, not she, had the power. And they used it, tearing off her clothes and putting a loaded gun in her hand and raising it to her head.

The films in the first gallery address another set of themes: a lifelong fascination with repetition of language, sound and movement. (Freeing the Body, Freeing the Memory, Freeing the Voice 1975). She had met Ulay, by then her work and life partner--and "wanted to free myself from the past and enter into this love relationship." 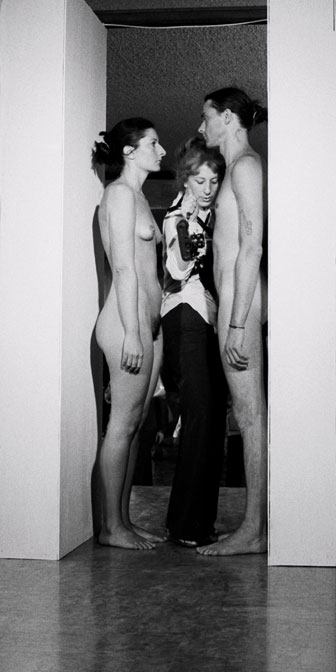 To follow this path of freedom, you must leave the first gallery, and make a transition through a nude reperforming couple, an ascent to the next level (Imponderabilia, 1977). But how you pass is the question. I did a small survey of how the women chose to pass -- frontally, towards the young, well-hung male, or towards the woman -- most chose the woman (not me)! When Abramović first did this piece herself with her lover and collaborator Ulay, they were even closer, and already on two visits I have seen the distance between the reperformers vary. MoMA has a sign up explaining that by law they are forced to have this reconstructed couple a bit further apart. So it's true: the seventies were freer, less regulated and more in your face. Still, it's an interesting challenge (especially with winter coats and satchels), a kind of pasata, the flamenco step where you have to pass your partner with the utmost closeness and attention, yet you do not touch. I have not yet seen someone stop between the two and look them in the eyes.

Once we are on the other side it's all about challenges. How do you test your love for somebody? Do you need to stare down snakes, throw yourself into columns (Expansion in Space, 1977). or walk the Great Wall of China? Can you kiss someone and use only the air you pass back and forth to each other to breathe?

"If anybody says to me 'no,' to me it's just the beginning," she boasts. 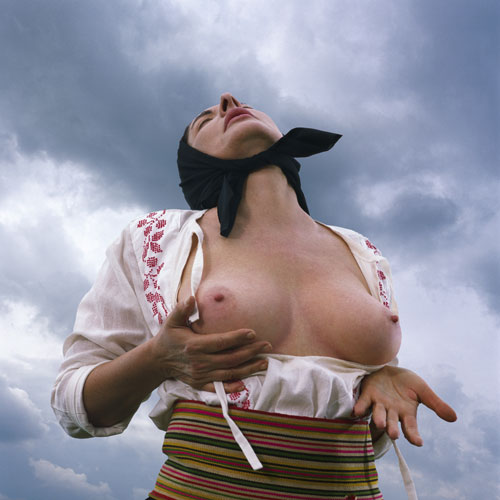 Her parents and Balkan history come in for a more folkloric treatment. Elaborate written passages describing her unusual past make a jaw-dropping narrative of magical realism. Her father saluted for his wartime heroism on a white horse, or in a vitrine filled with the hidden nursing medals and memorabilia she found under her mother's bed after her death. Peasant women reenact a fertility ritual replete with Hollywood rain. She scrubs the flesh and blood off carcasses. (Balkan Baroque, 1997) She takes a skull and presses it into her stomach over and over again. At what price political freedom, then?

Abramović eats an onion (The Onion, 1996) in a video piece that is so visceral that you wince and cry right along with her in a gallery filled with snapshots of her life with Ulay when they lived in a van. Then you see the way she challenged herself to live more ascetically, alone, unable to leave her bare-bones wooden environment because the frets on the ladders are made of knives in The House with the Ocean View, 2002. Can we purify ourselves by living simply with wooden furniture and reduce reduce reduce the stuff around us to get back in touch with the things that matter?

In the next gallery, a female reperformer is impaled by a contraption right out of the Story of O (Luminosity, 1997), a heroine mounted on the wall. On a return visit, I saw the changing of this guard (reperformers relieve each other in white lab coats), a complicated ritual with ladders and duplicate bicycle seat covers. It was more exotic and dramatic than any theater I've seen in a long time.

"Only if you reperform performance work can it live, " she insists.

Finally, you see the images of her cutting herself and lay down on a block of ice, surely the most challenging to watch in the exhibition. (Seven Easy Pieces originally performed at Guggenheim). In a final more ascetic vein, she's a perfectly still St. Teresa of Avila (Holding Milk, 2009)

Abramović is our fearless avatar. She puts into action, not words, the fears and hopes we have about connection, about our bodies, about our death. Whether laying under the ephemeral weight of a skeleton, or hung up in a contraption Christlike, Leonardolike, strung up and impaled both, from the wall, or bound by their hair backwards to a man--each image is simple and the very thing that causes us to stop and take stock.

Finally, there is a piece that offers you a taste of what Abramović does. You can lie down and rest your body, by then weary and filled up with these confrontational images. A do-it-yourself Marina. Though I can sit still for hours in front of a computer or reading a book or watching a performance, meditation or even holding a yoga pose is impossible for me--though I know it would do me a world of good. I was never a Be Here Now girl, even in the sixties and seventies but I understand, like her, the impulse to revisit my earlier self.

Already legends are springing up about the show at MoMA--of trustees being forced to stare each other down at meetings a la Abramović, of a specially made chair for The Artist is Present that allows Abramović to relieve herself without getting up, of a retreat for the reperformance artists that prepared them for the punishing hours by wading in freezing water.

Abramović is the subject of a forthcoming biographical play by Robert Wilson and the future mistress of a eponymous museum dedicated to the performance arts. On opening night, Ulay, whom she hadn't seen in years, sat down across from her as she performed The Artist is Present and she burst into tears. That she is vulnerable, even after a lifetime of trying to understand and harness her pain, is a stunning, but not unexpected development.

Abramović puts the art into exhibitionist. Exhibition(ART)ist. Curator Klaus Biesenbach's exhibition makes it all makes sense, that the beautiful girl brushing her hair at the outset and the nun of the final gallery is the same person who has cycled her way through love and pain to shock, stimulate and make us look harder, longer, and without looking away. Do not miss this show.

Marina Abramovic: The Artist is Present opens Sunday, March 14th and continues through May 31st.