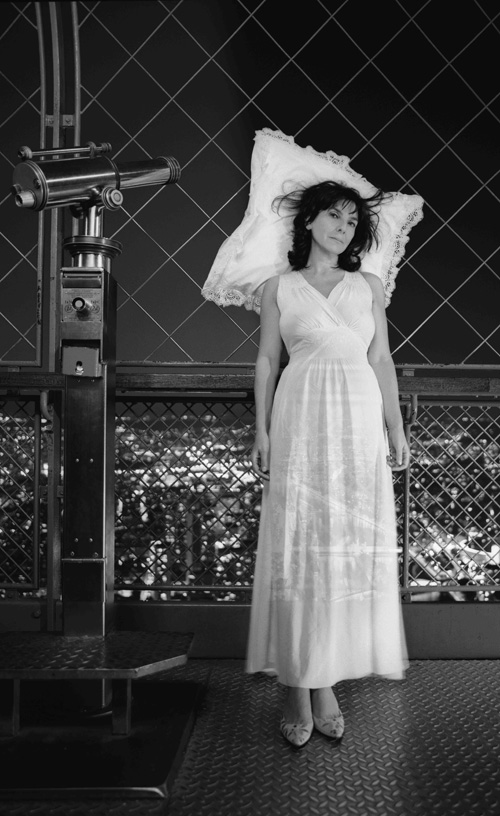 There are only a handful of artists who are able to live up to the personas they have created through their art. Sophie Calle is one of those stars.

Her last show in New York, Exquisite Pain, told the story of the man who had abandoned her and her quest to make sense of it all. Through photographs and text, Calle circumnavigated the anguish and despair, rubbing salt in her own wounds, trying to get at the heart of the matter even though her heart was broken. I thought she was brave and foolish at the same time: it's hard to be rejected but harder still to tell the world.

But Calle doesn't draw distinct lines between public and private the way many do.

Muttering about whether she has forgotten her "combinaison" (slip), her young male video crew seated nearby and other tech staffers in close range setting lights, she kicks off her boots and rapidly strips down to a short, yellow wool sweater dress and then pauses for a second as if to momentarily consider whether she should bother going elsewhere to finish, shrugs her shoulders, purses her lips the way only French girls can, and pulls it over her head to briefly reveal her youthful poitrine.

In its stead she puts on a silky black slip (found, after all) a short, flapper-style see through chiffon dress and a pair of black ballet slippers over her black tights, the outfit she will wear for the performance. I tell her later she "faites tres gamine," which means she looks like a young girl with her bangs and cropped hair and that "je ne sais quoi".

She is my age, not a model getting ready for the catwalk, and I sit there trying to imagine having the moxie to pull that deshabille off.

But Calle is the mistress of pulling it off, of clear-eyed looking back as it simultaneously serves her art. Whether it's counting down the days from the lover who has jilted her around the world (Exquisite Pain) or chasing down the people in a lost address book, (Address Book), Calle doesn't just make lemonade but an entire lemonade stand out of the lemons.

Now, she is in NY to direct a section of an Arvo Part (acclaimed Estonian composer) four part bill at the Guggenheim Works and Process series but the subject of her investigation this time is into the death two years ago of her mother. Once again Calle turns a somber and difficult subject into a haunting exercise in pinning down the truth. She practices a walk to her chair -- sexy and gliding -- and in an intensely Parisian-inflected English, she begins to read her narration for her film. Not everybody loves Calle's élan. One internet blogger posted a very long tortured narrative bemoaning Sophie's capture of the art world flag -- the one she flies that trumpets her life and loves and decrying her "bourgeois, commercial, inauthentic art."

But I (and many others in the Calle fan club) am always riveted by her tales of heartache and angoisse and avidly read and study her for inadvertent tips about men (what is it exactly about unrequited love, about being rejected that resonates in so many of us?), for even as they are leaving her in a flurry of diary entries and photographs and email, she is specific and careful about her end of the affair.

"I like to control" she says quietly but firmly and that becomes obvious as she is indeed involved in every detail of the performance from lighting to the questions she will be asked as part of the evening's panel to negotiating with the music director whom she says "refused many things." Dismayed at the somewhat reduced evidence of her artistic vision due to economic and time constraints at the Guggenheim (someone was to have been lowered from the ceiling for example), with "too many rules," cranky at the musicians who have left precisely at six pm even if their "repetition" is not finished to her satisfaction (the music is Part's elegiac lamentation L'Abbe Agathon), Calle finds herself in a situation she does not treasure -- one where she is not in charge. "I'm not like a musician," she says, "I don't stop in the middle."

I ask her if that means she doesn't like to collaborate and she denies that. "I love collaboration. You can control your part."

Team Sophie (a two man video crew, a director, an assistant, a friend) is quietly omnipresent but she solicits their opinions and on more than one occasion does defer to them.

Though I suggest to her this piece about the death of her mother is an attempt to exert some control, she says it's more about not wanting to miss her mother's last breath, or last words. A camera stationed by her mother's bedside ran for 90 hours and was insurance against this eventuality -- so that in case she had to go out to the bathroom, or take a phone call or accidentally turn her head away and her mother chose that second to die, she would have it documented. Calle heard that people tend to choose just "that little second" when you've stepped out.

Remembering that it was precisely that which happened to me when my father died after a bedside vigil during his long illness, I understand the possible frustration.

But though she was standing right there (and she eerily resembles her mother in profile), she says it was "impossible to capture " in the film which was part of the exhibition she organized as the French selection for their pavilion at the Venice Biennale in 2007. That her mother would not be there to share her honor at Venice clearly pointed Calle towards a different kind of heartache, and yet when I note this change of subject she says, no, not at all, death and boyfriends who go missing are the same thing.

And she's right about that.

As is her wont, Calle takes us in hand as fellow-voyeurs in the close examination of these departures. One glimpses only her mother's attendants and a slice of Calle as they hold the back of their hands up to her mouth to check for breath, and a little stuffed cow gazes mournfully over the edge of the sheet.

Calle's mother had three dying wishes after she was diagnosed with cancer: "to see the ocean one more time...to discover the Arctic and...to see New York again." She is able only to fulfill the first wish. So, after burying her with talismans of her life, Calle takes her jewels on an Alaskan cruise and buries them in the snow. And finally she is here at the Guggenheim, "center stage" as she would have wanted.

The Part music and libretto about an abbot and a leper seems uncannily conjoined to Calle's film and narration -- two works that at the outset had nothing to do with each other -- and it was the visionary producer of Works and Process, Charles Fabius, that synched them up. Other work from Venice, which included Calle's responses from over a hundred women analyzing and commenting on the break up email Take Care of Yourself, will be on display at the Paula Cooper Gallery beginning April 9th.

I ask her if she'd like to direct more opera or theater. She reminds me that she did a film, but she hasn't done a second -- perhaps another case where she did not have enough control. Calle has strong opinions. Yet when asked whether she has thoughts about Obama, or Sarkozy she demurs, saying if we are going to talk about politics then we must speak for hours about nothing but politics. It makes sense to me, the wish not to give something short shrift. But I can't resist asking her about Madame Sarkozy (Carla Bruni) and the role of women, or women in the arts in France and she bursts into peals of laughter. "Madame Sarkozy?" she asks me as if I have got to be kidding. "Ah, non...."

Only later, do I understand: she is controlling our conversation.

I'm a little afraid of Sophie, imagining if she got hold of my addresses (I don't store my numbers in my cell phone, luddite that I am): to be on the other side of her investigative ardor must be quite something and the man whose address book she found and copied was reasonably incensed.

But in the age of Facebook and Twitter and blogs, Sophie's roundup-style of comments seem prescient; she was well ahead of the rest of us in the impulse to make her life a collective of self-absorption and documentation, really a trailblazer in this regard.

This is the stuff artists (or writers, or even journalists(!)) use: the impulse to document something, however painful, is, historically, the source of some of the greatest creativity.

After the rehearsal ends, she reverses the deshabille, but this time, perhaps knowing that I am there, she asks her crew if they wouldn't mind ...and one hops away. A male friend who sits close by says its nothing he hasn't seen already and stays put.

I look though, because I think just being around her encourages closer observation--and isn't it legit to observe the Queen of Observing?

In fact, I want more of what she has: an iron resolve to get it right and an insatiable curiosity. The combination makes for a piquant but very rich stew.