Next week, Enron -- a play that Englishwoman Lucy Prebble wrote on commission from Rupert Goold, the director's, regional theater company in Chichester, England when she was 28 years old -- debuts on Broadway. There couldn't be a more auspicious time for its stateside premiere as news of the latest Enron-style Wall Street scandal cascades around us. It is the stuff of great drama, great tragedy -- truly operatic in its dimensions.

But the Goldman Sachs accusations, whatever they lead to, only point up what we've all known for quite some time: that certain cultures, hothouse though they may be, breed a kind of wildcatting that seems now to be endemic to our human nature. 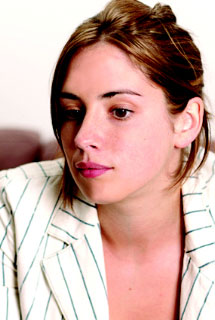 Prebble thinks she may know why, and she is probably as good a person as anyone to give us her take: after all, the genius financiers and Ivy League grads and insiders are the ones who have gotten us into these messes. It's downright refreshing to have a young, external view that is remarkably clear eyed as well as one with a bit of fun. She is the youngest of a family of business men and women -- which has also given her a personal perspective on what happens to people in the markets.

Alas, the applications of Enron seem never ending. Chances are right this very second, another Enron-style raptor theoretician is out there working in a basement somewhere (or probably in a plush, Park Avenue office). These guys (and they are mostly guys) have little time for their families or even sex -- except, as Prebble proposes, on a tabletop at the office or at a raunchy all male bonding weekend in Mexico. And it's not just Wall Street. I remember all too clearly the Hollywood (all-male) river rafting "bonding" trips of the eighties. Enron, has already become a classic story of hubris, right alongside Oliver Stone's Wall Street, which depicted the eighties lowering of the bar. (How low can it get? We're not there yet...)I heard recently from an impeccable source that many of the traders who worked for Enron have migrated to unregulated carbon markets, which only makes me fear that the environment will be the next scam we read about.

Prebble took time away from the last week of previews (the play opens on April 27) to go Off the C(H)uff. 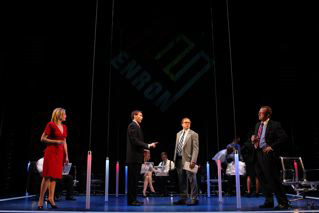 CZ: How does it feel to be 29 with your show arriving on Broadway? What about Broadway is both catnip and potentially lethal for transfers? Did you ever hesitate bringing it over from London? You have stuck pretty much with the same creative team. Have there been many changes?

LP: It's tremendously exciting and nerve-wracking to have a show coming to Broadway. I've had very little time to take it in properly, we've all been working so hard. I am in awe of the talented and experienced team of people who work in Broadway theater; the cast and the crews, for them it is truly a profession, and I am learning a great deal.

I think Broadway is certainly a high stakes world and if it were possible to know what would surely succeed and what would surely fail, I would be a very rich producer rather than a writer! I have spoken to some other writers and directors who've played the Great White Way and who feel that the biggest mistake is to tear the heart out of something for a perceived idea of 'Broadway,' to imagine it must fit a certain mold and to change it beyond all recognition during rehearsals and previews. The show is the show, for better or worse.

There have, of course, been some changes. But these have all been in the spirit of trying to make it as good as it can be. I have no doubt the script is now tighter and slicker than in London, and we have altered the set so that it can fill the wider, more demanding space of the Broadhurst theatre. I think it's tremendously important to maintain the same creative team, as they all know exactly what the original inspirations for the piece were and we have developed a useful shorthand, as well as becoming good friends. Perhaps the greatest difference and the most pleasing one, is the all American cast we have here, who have brought their own energy, talent and humor to the show which has been thrilling to watch. 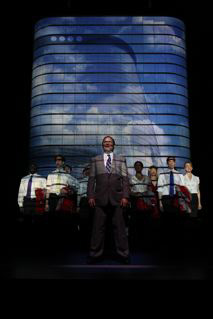 CZ: Jeff Skilling and Andy Fastow start out as nerdy wannabes, both personally and professionally, and turn into these superheros. Do you think it's the cowboy mentality, the wild west mentality that attracts them to this kind of market as it's unregulated? How did you get that mentality so well? Have you spent time in the States? Is it that kind of person who has more of an attraction to the greed-is-good mentality? Do you think Fabrice Tourre (the Goldman Sachs trader indicted in the trading scandal du jour) could have similar roots?

LP: I wouldn't wish to comment on the ongoing legal situation with Tourre and Goldman Sachs, but there is certainly something uniquely American about the idea of the 'frontier' and its need to be conquered. Being such a large country, with so many open vistas, the romantic notion of 'freedom' and therefore a lack of rules or regulations, permeates deep into the country's landscape and mentality. I find this, as many Europeans do, very attractive, though there is also some danger to it. Having said that, I think the play is actually more about business than it is about America. I have spent time in the States, but the cowboy mentality you mention can be seen in the hyper-masculine activities in corporations all over the West. The paintballing weekends, the sports, the team bonding trips; all of these lessons in making what is essentially accountancy feel daring and masculine. Business is one of the few areas where the really smart, nerdy, unpopular guys from school can rise to become powerful, aggressive, respected figures.

CZ: Your sole woman principal, Claudia, is a babe who makes her way sexually -- as well as being quite pigheaded. Yet you have her come off smelling somewhat sweeter than the rest. Is this because she was smarter or dumber?

LP: I felt strongly that as the main female in the play, she should not just represent something 'good' and 'ethically pure' in opposition to the men, just a different perspective. She is flawed as well -- her reliance on her sexuality, her refusal to see past the traditional hard industry she is experienced in. 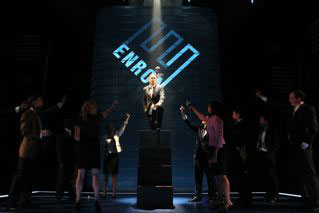 CZ: MSNBC has been running Enron: The Smartest Guys in the Room almost daily for the last month. How much did this film influence you? Some scenes you feature seem to have come directly from a highlights reel.

LP: The film had very little influence on me. Bethany McLean's book, on which the film is based, is a beautifully written tale of the company, but I made sure to read everything that has been written about Enron, and those accounts, interviews and articles include a lot of the same information and moments. These made their ways into the play as they do any retelling of the Enron story.

CZ: You make an analogy with the shadow company Enron created as being like a mistress who makes the marriage better as she takes the pressure off the real thing. The Enron guys are people who, according to your play, believe "we don't just play the game, we are the game" and that trading is the closest thing "there is to sex." Having written two seasons of the series Secret Diary of a Call Girl, you're particularly suited to drawing out the sexual comparisons. In fact, you've been quoted as saying your work is thematically linked: prostitution and business are being about "deception and compartmentalization," too. What is it about sex and money?

LP: I consciously chose moments to allow the sexual imagery into the play, half because the crudity of that sort exists in the masculine business world, but also because it allows moments of color and the raucous amongst the drier world of numbers.

Freud said that life is "sex and work." Most arguments and acts of violence tend to have their roots in sex or money. I suspect that I'm interested in the most bestial urges within us (the urge to conquer or to reproduce) as well as those things we have constructed ourselves to civilize ourselves (money, work, law and order). The tension between those two things have always fascinated me. My favorite book as a child was Gulliver's Travels, which deals explicitly with this.

CZ: The play has now gone from a regional UK theater to the Royal Court to the West End to Broadway and now to Hollywood, where Laura Ziskin's company (producer of Spider-Man) at Sony has won the much coveted film rights. Are you at work on the screenplay already? And how do you translate a very theatrical production larded with song and dance to the screen?

LP: I am working on the screenplay. My intention is that it should not become a dry biopic of the story simply because it is being translated to screen. You can see in the work of filmmakers such as Charlie Kaufman that films can support creative and fantastical forms. In fact, through close up and other techniques it is even easier to go "inside a character's head" and perceive events form their POV. 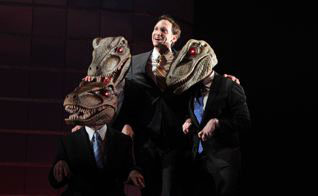 CZ: You put very wise words into Jeff Skilling's mouth at the end of the play. In a speech about bubbles, he says, everything good was developed in a bubble, that you lose touch with reality, that "your eyes glaze over." Isn't a bubble by any other name just a way of saying you need a hothouse atmosphere, a disconnection with the outside world, for creativity to flourish? For example, even in the making of a play?

LP: There is little doubt that my experience as a writer means I do have some empathy for the world of bubbles. But whereas risk and creativity are important in the arts, they are not necessarily qualities to embrace systemically across business, upon which where many people's livelihoods are dependent.

The final speech of the play is a challenging one, in which the character of Skilling turns on the audience and suggests that all humanity is like him, that all progress is dependent on risk. It is not my view but the character's.

However, I feel passionately that the more comfortable perspective of 'a few bad apples' is not true either. It would be comfortable to end the play on the sentencing of the characters and leave the audience feeling that is done and dusted. But we can see from recent emerging stories about Lehmans and about Goldman Sachs, and even looking back at at financial bubbles through the ages, that there is something more prevalent going on. That there is something within humanity that needs to be guarded against, that pushes us towards boom and bust in which the powerless always suffer. And that many of us in the West play some part in that.