A last-minute chance to explore Istanbul, a city I have longed to visit, came just on the heels of the Erdogan-Peres contretemps at Davos, and I leapt at it, if leaping can be measured in six thousand miles.

A friend, a well known screenwriter, who had been there five or six years ago, sent an email stating, "Don't let me discourage you [but] I assure you I would never go back unless I absolutely had to for work or something, and even then..." She and her two daughters were harrassed at every turn and she finished her justifiable rant against the men, the disrespect for women, the defacement of the architecture with, "not my country, not my city". I had lots of other girlfriends who had been and adored it, but this stuck in my head, so when a female museum art director pointed me towards a luxury hotel, I was therefore unusually mindful. Normally a girl who prefers roughing it a bit, I was concerned.

I needn't have been. 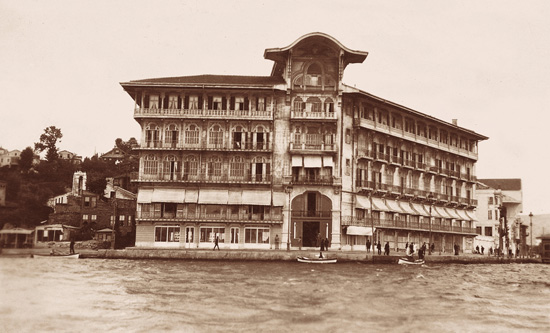 The calls in the street as I passed on the cobblestones were almost proforma... they were as insistent for any "tourist" that passed by, a culture that has sprung up in a society where so many are out of work and dependent on tourism. (Hundreds of fisherman line the bridge on a weekday morning.)

And the off-season in Istanbul for Western tourists is on-season for tourists from other Middle Eastern countries. Many Islamic women hold hands and kanoodle with their boyfriends in the street, which makes the headscarves a festive window dressing on love. Women from neighboring countries in full burkhas are side by side with women in modified dress and even girls and women who are totally non-observant. 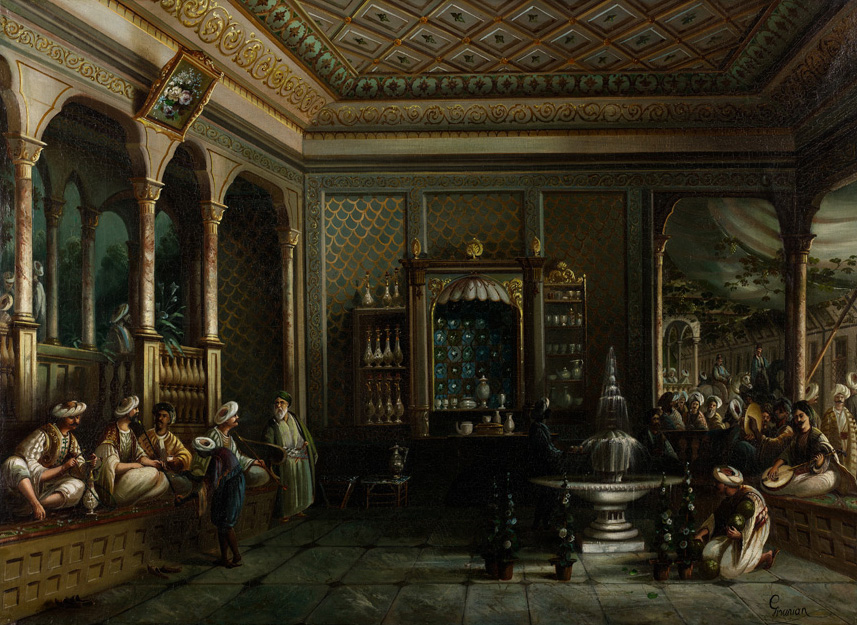 But the East-West divide, now that I am literally straddling the cradle of the Orient Express, is not nothing. The way of identifying the two sides as Asian and European reminds one constantly of the uneasy traditions that rub up against each other culturally and politically, and which still raise backs in the city.

Yet, the mash-up of cultures is just magical. To stay in a Four Seasons and overlook the Hagia Sofia and the Blue Mosque would be as if you could stay at the Catacombs or overlook the Vatican, or Notre Dame on the Seine, something no longer possible in Rome or Paris

But we are concerned that we are practically the only ones in the hotels -- and like at all luxury hotels, I'm hyper-aware of the disparities of life -- the vast fountains, heated pool, endlessly helpful staff, are they all there for the two of us? It's not possible that there is already Western backlash against perceived antisemitism and realignment towards the Islamic fundamental bloc, we think, just the usual fall off after the world economy collapses. 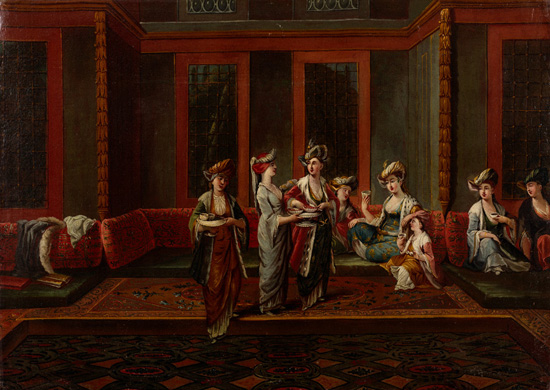 It feels both slumdog and millionaire at the same time.

What one gets in the winter is the strait unvarnished by large yachts and dotted only with ferries, the call to the mosque clear and piquant, the Galata Tower courtyard (at the tower itself, a determined cleaning crew literally threw buckets of water at our feet), a sunny holding space for morning coffee or a stroll, the streets of Beyoglu quiet with stores for mandolins, guitars and violins and fish, the only evidence of the famous whirling dervishes, their deserted mansion (now in restoration) surrounded by a charming courtyard and cemetery filled with dead Pashas, sheiks and one French count who became a pasha in the end, and a guardian who was eager to test his rudimentary Italian on an equally challenged tourist. Immense highlights are the passageways, especially the Cicek, that are an excuse for tiny shops and arcade fish restaurants, conjoined by giant chandeliers filled with fake flowers.

After a huff and a puff or I'll blow your house down exit from Davos, Turkish Prime Minister Erdogan returned home to Turkey a hero; the nation which has the carrot of EU status constantly dangled in front of its nose by France and Germany rallied to support the anti-Israel sentiments of its feisty leader. Suddenly he was the new focal point of the Islamic right, having been Israel's closest ally in the region. 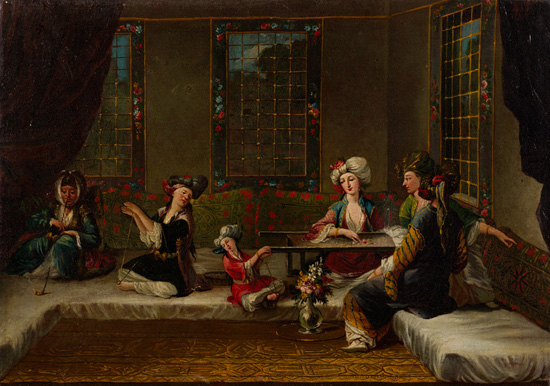 And the tentacles of the resurgence in fundamentalism reach everywhere . Ozalp Birol, the intensely cosmopolitan director of the Pera Museum, a private museum funded mostly by the branches of the Kirac family, offers up his "postponed" Chagall exhibition as evidence that he is protecting against possible antisemitic demonstrations down the road.

There is ample evidence of the deep fault lines (earthquakes too!) of the multiculti society that is held together here by spit and polish.

The Pera archives next door at their foundation, a repository of Istanbul-ian wealth: photographs, rare books, dioramas, as well as the collections on exhibit at the museum itself are ample evidence that Istanbul has always been a center for art and culture. 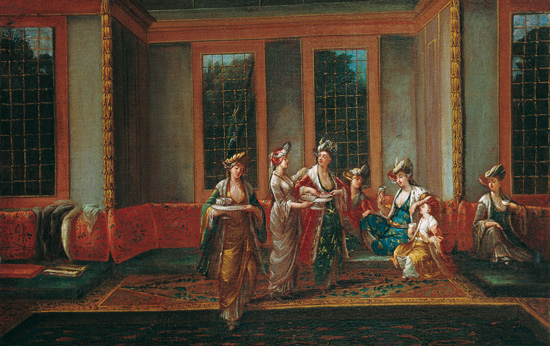 One of the two Four Seasons finds itself at the crossroads of it all. Adjacent to the Hagia Sofia, a few steps away from the Blue Mosque and the Topkapi Palace, looking over an excavation of Roman ruins meant to be finished in December.

The cavernous Blue Mosque with its tiny section for women, still calling adherents to prayers and the faded simple splendor of the Museum of Turkish and Islamic Arts across the way (each room of the former palace with a fireplace and coffered ceiling) mark the many faces of Turkey -- the intensely talented tribes with their bejeweled garments and complicated rugs amidst elegantly constructed yurts and the eventually Western-facing Istanbulian wealthy of the 19th century, looking much like their counterparts in Europe.

At the Hagia Sofia, finally, one finds the more aggressive overlay of religions and history: massive Islamic medallions slapped on the church walls while elegant tracery and tile recall both byzantine and ottoman forebearers. I, along with the mostly middle eastern tourists clamber up the worn stone ramps. At the Alhambra, one feels the weight of pure Islamic tradition. At the Hagia Sofia, with its wrought iron candelabra and its wooden raised platforms for prayer, one feels only dismay that we are still doing so poorly at assimilating each other's culture. Erdogan and Peres would do well to make a joint visit to this magnificently faded splendid structure and remind themselves that the collision of the culture of their countries, marks some pretty serious co-habitation.

Now, they just have to stop living together and finally get hitched.

The local English language newspaper, Hurriyet, is filled with column after column of dissection of Erdogan's actions at Davos, now presumed to have been highly orchestrated in advance and negotiated with the Israeli's, why else the dust up having been so quickly patched over by both sides. Here in Istanbul, a man leaving for the airport as local supporters of the ruling Justice and Development (AKP) party came to greet Erdogan was stuck for so long that fearing he would miss his flight got out of the car and walked two kilometers. There are those that think Erdogan is playing straight into the hands of his base (sound familiar?) and those that he is keeping the Israeli balance of payments, now favoring Turkey, well in hand. U.S.-Jewish support groups are rallying against Turkey, yet know that it is their only hope of support in a region increasingly pitted against Israel.

The sultans seem to have had it all figured out: beautiful and intelligent girls from the provinces were brought to the palace as concubines. If you became a favorite, and pregnant, you could rise to the level of a consort, an instrument of the perpetuation of the dynasty. Eunuchs guarded your every move behind the elaborate tiled and filigreed existence in the harem where you existed with other women in a highly structured society of refinement and relative luxury. Yet, in the end, your entire life passing behind a screen seemed as harsh an alternative as poverty elsewhere.

Western artists came to Istanbul with their fascination for all things "oriental" and painted their fevered, opulent visions of behind the harem walls -- but now having seen one of the finest at the Topkapi Palace, I think they are almost understated -- the real thing a fabulous fantasy land prison.

Having been the cradle of the East and West's fascination for each other, Turkey is a complicated spot, at once showing how worlds can collide magnificently and the collision course itself: let's hope Israel and Turkey can get their mojo working towards detente instead of cant.