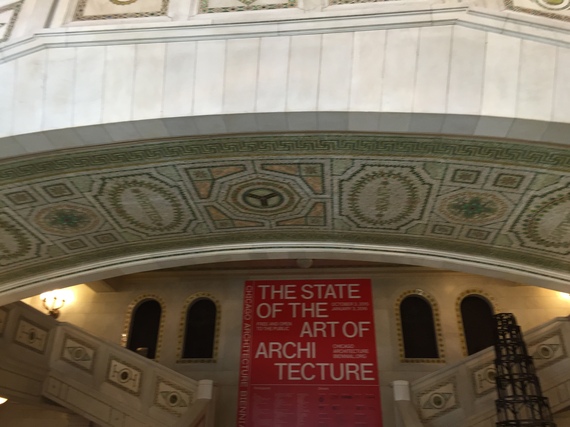 The entryway to the Chicago Architecture Biennial

To tout its riches, to encourage tourism, and to get its own citizens to stop apologizing for goodness sake, it has undertaken a number of initiatives to correct what they see as the hunched shoulder effect. 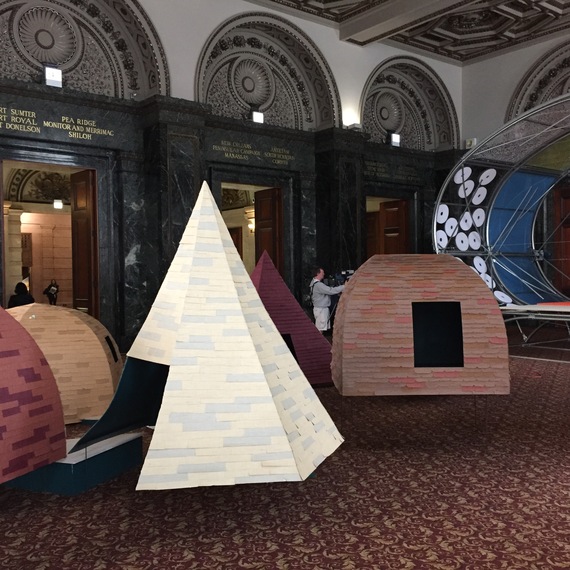 First there is the Biennial itself. Held in the majestic former Library by Shepley, Rutan and Coolidge which has been restored and polished, the over 100 entries chosen by Sarah Herder and Joseph Grima from over 500 worldwide submissions makes plain that architects are no longer restricting themselves to bricks and mortar but are deeply engaged in urbanism, object design, painting and sculpture, performance, historical analysis, and fun and games. It's so very hard to make a living as an architect in this day and age: Endless (paid) school turns into endless (unpaid) submissions and competitions and it's understandable that architects are seeing that they must be fleet of foot to compete. 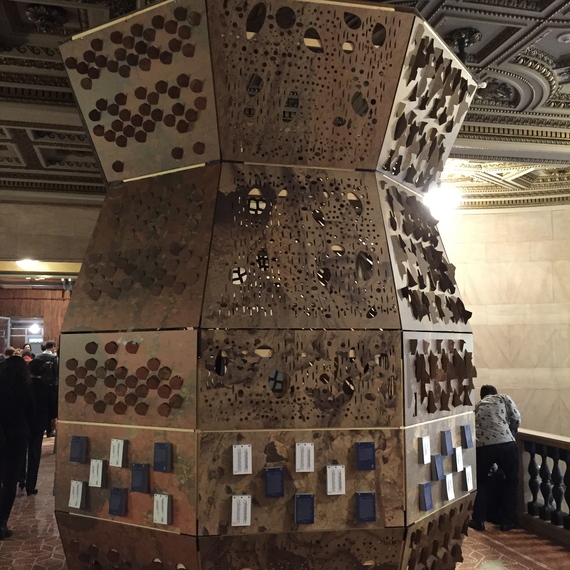 Here is another bit of good news: There are more women architects doing really wonderful things. We are meant to be gender blind, but not me: Since the title of the expo is The State of the Art of Architecture I can say my own assessment is that though women have traditionally lagged behind the men (big ego for architecture required!), here we are well-represented.

Even Paula Crown, from the philanthropic family, showed off her luxury Studio Gang studio which made the rest of us think on our homely work spaces as so much cabbage. 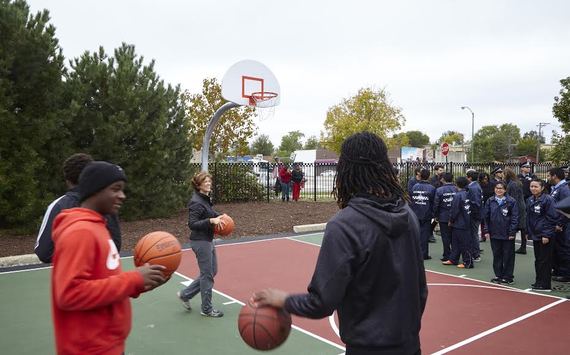 As part of the Studio Gang biennial project, they opened a basketball court at the 10th Street Police Station in North Lawndale and cops played locals. Jeanne Gang, on the court.

Jeanne Gang is a beautiful, stylish, whirlwind of her own, she is getting larger and larger commissions, including towers, she is just opening a huge new studio space and having a pizza with her growing staff made it plain that she is an enlightened and caring leader. It's only her name on the masthead even though she works alongside her husband and she will get the Legion d'Honneur in France despite never having built a building there in a few weeks. Gang submitted a brief on Police Stations, a timely consideration in a renewed age of scrutiny about police brutality. 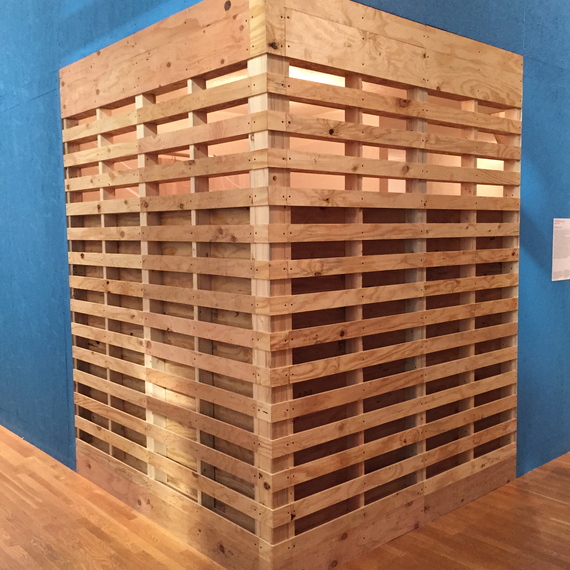 Mexican architect Tatiana Bilbao is also torrent of activity (also beautiful and stylish: This cannot be an impediment for female architects) though in less commercial spheres to date, and her sustainable Blue House in the Biennale is a thoughtful response to the problem of housing. 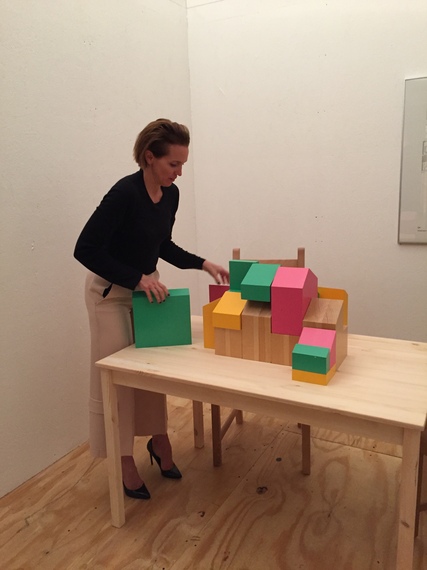 Tatiana Bilbao inside her sustainable house

Tatiana has not had a chance for as many large corporate projects yet, and I am very eager to see what she is able to do on a larger scale. She cares deeply about Mexico and its problems and is sure to someone to watch as she makes her way on a more international platform. 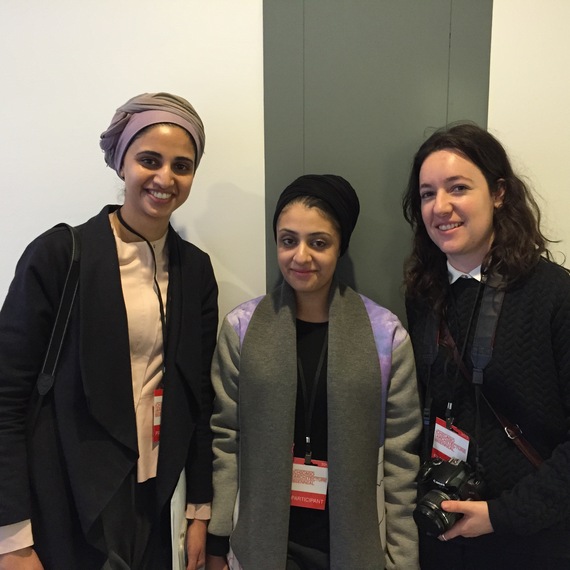 Counterspace, a collective of three engaging female South African architects who just graduated last year (b. 1990) who are self-described as interested in "future and otherness" makes plain the diversity and scope of hungry young architects who understand they may have to be all things to all people in order to survive in today's hyper competitive marketplace and who also still hold "day jobs" in order to make ends meet. 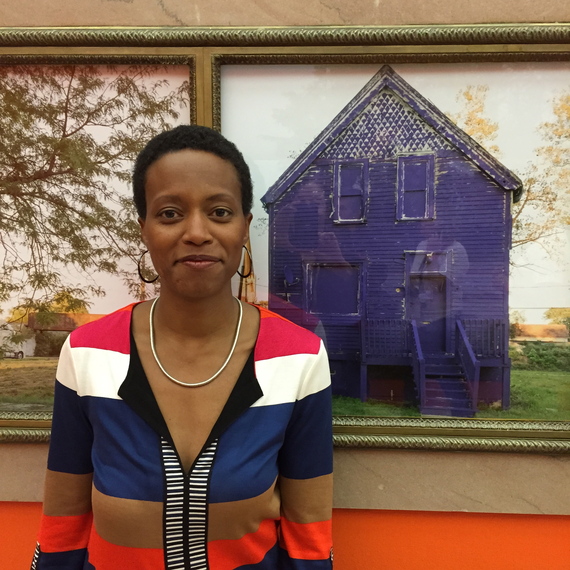 Amanda Williams was going the corporate architecture route and then decided to chuck it all -- at least temporarily -- and indulge her artistic passion for connection with the environment of her home turf in another way that would draw attention to the plight of urban housing. Her multi-colored houses do just that.

Another continuing architecture trend (think Eames, Gehrys, Maynes, et al) is the husband-wife collective. This makes complete sense to me as having been married to an architect, I understand that pillow talk is generally entirely taken up with complaints about wayward clients, out of control boards-of-trustees, bids coming in over budget, construction disasters et al. 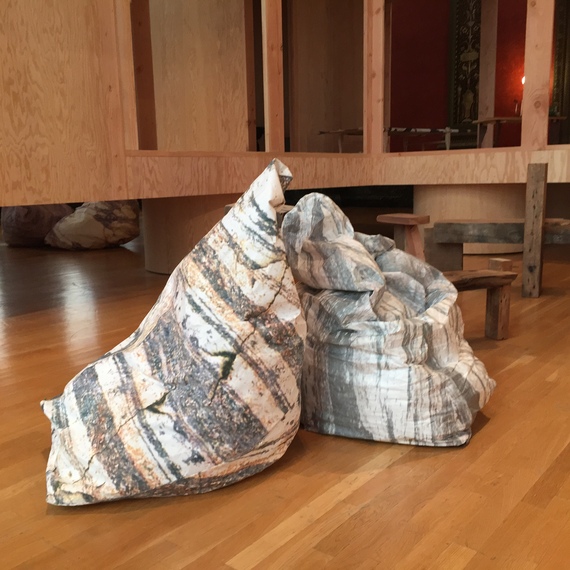 Husband and wife team of Mos Architects built one of the four houses accompanied by the best fake boulder bean bag chairs I have encouraged them to bring to market.

Husband and wife team of Johnston Marklee (I know their work in Los Angeles) is doing a new MOCA building in Chicago and it seems as if their venture is also thriving.

At the airport on the way to New York, I ran into Liz Diller who was not a participant but had been invited to a dinner while she was working on another project. I had just been in Liz's new Broad Museum and remarked to her that her firm, Diller Scofidio -- another husband and wife firm of which she is clearly the lead partner -- is doing so many major projects. Like Renzo Piano of the last decade, this seems to be theirs. I told her that I was inclined to point out this confluence of strong work by females in my piece and she demurred. "Every once in awhile it's ok to state" she said somewhat begrudgingly. This is what women at the head of the pack often feel because they are tired of being singled out as such.

Still, the new Yale Architecture School Dean, Deborah Berke, is for the first time, a woman.

And given that the profession is still overwhelmingly male despite people like Diller and Zaha and Jeanne and Tatiana, I think we must praise them and talk about it nonstop.

Another trend: International architects opening offices in the U.S. With Europe and Asia also in a freefall of sorts the émigré architects are hip that work may come more easily here.

The fair was bookended by two spectacular pieces of vintage male architecture which I have to honestly say were unsurpassed by the contemporary entries, as delightful and engaging as some of them were. 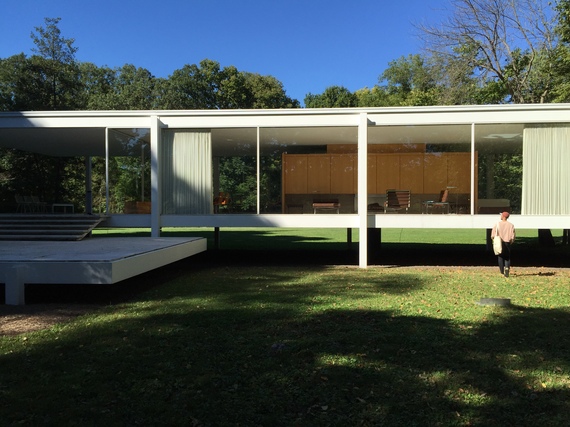 Mies Van der Rohe's Farnsworth House in Plano Illlinois, which inspired Philip Johnson's Glass House, although the antithesis of Tatiana's Blue House shared many of its plain values. Simplicity and sheer elegance, it was a machine for living in the cornfields (I have not spent time in the Midwest, there were cornfields everywhere, rustling under a gorgeous albeit windy sky). I was riveted by the purported love affair that Mies had with Dr. Edith Farnsworth, its singular patron (is it always the case that when an architect designs something for someone they are rumored to have ended up in bed?) 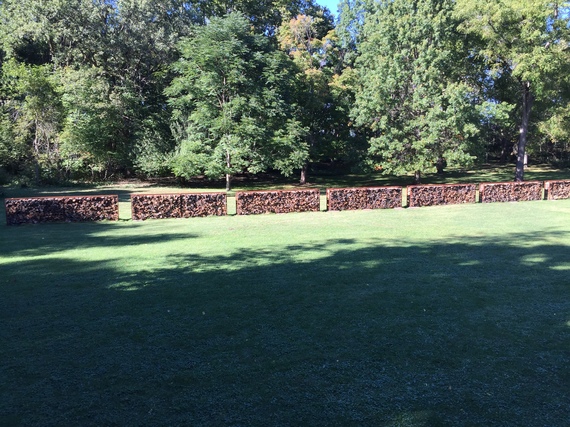 Wood piles by Manglano-Ovalle at the Farnsworth House

The bed in this case now looks out onto a beautiful field with a new project by Iñigo Manglano-Ovalle in an initiative driven by USA Artists in National Trust buildings all over the country. Farnsworth and Van der Rohe ended up suing each other, whether this was over false billing as Farnsworth claimed, or Mies's commitment-phobia is not apparently definitively known. 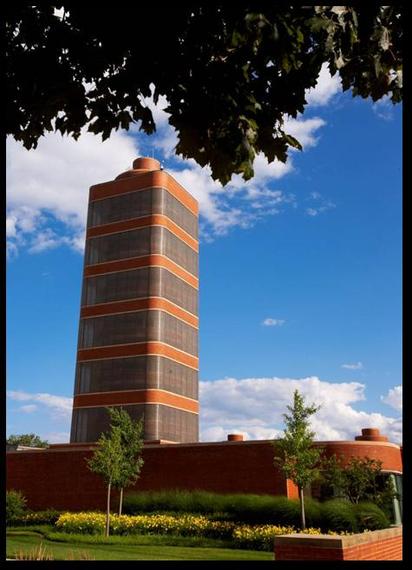 The pieces de resistance were of course the astonishing, still utterly contemporary SC Johnson buildings in Racine, Wisconsin by Frank Lloyd Wright. (Farnsworth an hour and half or so to the southwest on the Fox River; Racine about the same time due north on Lake Michigan.) 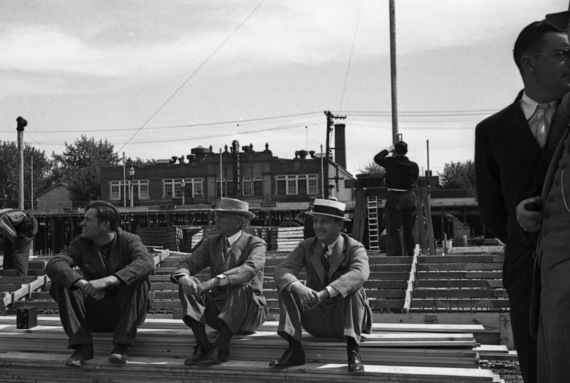 Architects all over the world know about this amazing suite of buildings he designed for Mr. Johnson who shared with him not only a love for wood (wax for floors after all), but for women (Wright was either married or mistressing multiple times, Johnson married three times). 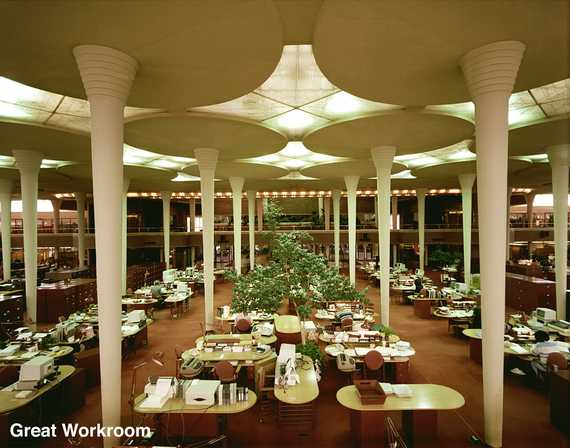 I cannot explain to you the breathtaking entry into this space, you MUST go out of your way to see it yourself. 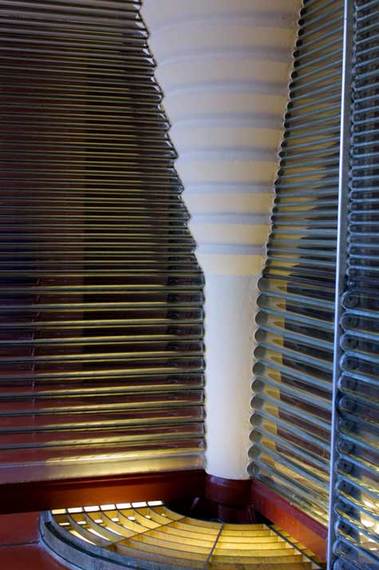 The company is hosting free bus tours for the three months of the Biennale, and I can only say I think it is worth going there even for this alone. You will not be disappointed. Nearby is the last prairie house Wright designed for Johnson's family, Wingspear (the third Mrs. J did not like and built another more pedestrian house nearby after years of complaining), lovely also but not the wow of the corporate Administration building or the Research tower, almost entirely still original, and maintained and rehabbed in the most sensitive manner. 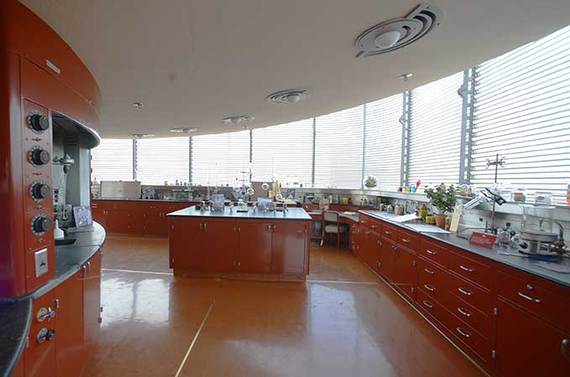 I think I will go out and buy Pledge and Johnson's Wax today just to make sure they continue to have enough money for upkeep. I only hope they are engaged in an effort to make their products more environmentally sensitive as well. 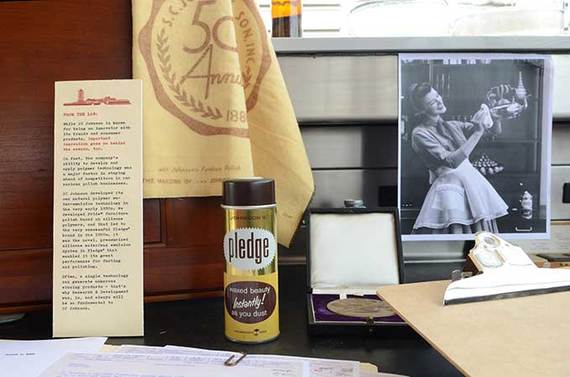 Johnson had his eye on commerce as well as architecture

Studio So-Il from NY who built an eye-catching bridge inside the CCC ended up accompanying me on my tour -- another husband/wife based collective -- and it was obvious that young architects are still as impressed by Wright as the rest of us. 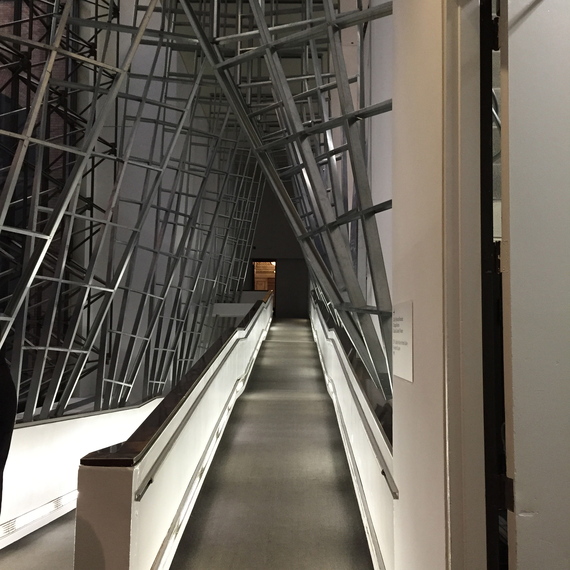 Mayor Rahm was everywhere -- and it is acknowledged that he was the moving force behind this biennale. The Wall Street Journal reported last week that the Chicago Business Barometer is weirdly perceived as positive even though its number is lower since the rest of us are in trouble as well. The sponsorship by BP was a subject of conversation as it has been in London art circles and truth be told, I felt their much-hyped Kiosk design winner looked much like a gas station. I did not get to stay for a tour by Theaster Gates of the new Stony Island Arts Development -- Gates also a Chicago native booster -- nor did I get to see David Adjaye's exhibit at the Art Institute due to time constraints. Adjaye is said to be a leading candidate for the Obama Library commission but I know that some local architects would also kill for a chance to be on that short list.

I stayed in a beautifully reinvigorated Chicago Athletic Association, in itself a worthy and newly-hip destination, and stole away for one evening to the Chicago Symphony, and finally got to see the lovely old world style Symphony Hall and Riccardo Muti in a lively performance. Chicago is also a city of great music and theater and comedy, in short, if you haven't been in a while, now (before winter!) is a very good time to go.