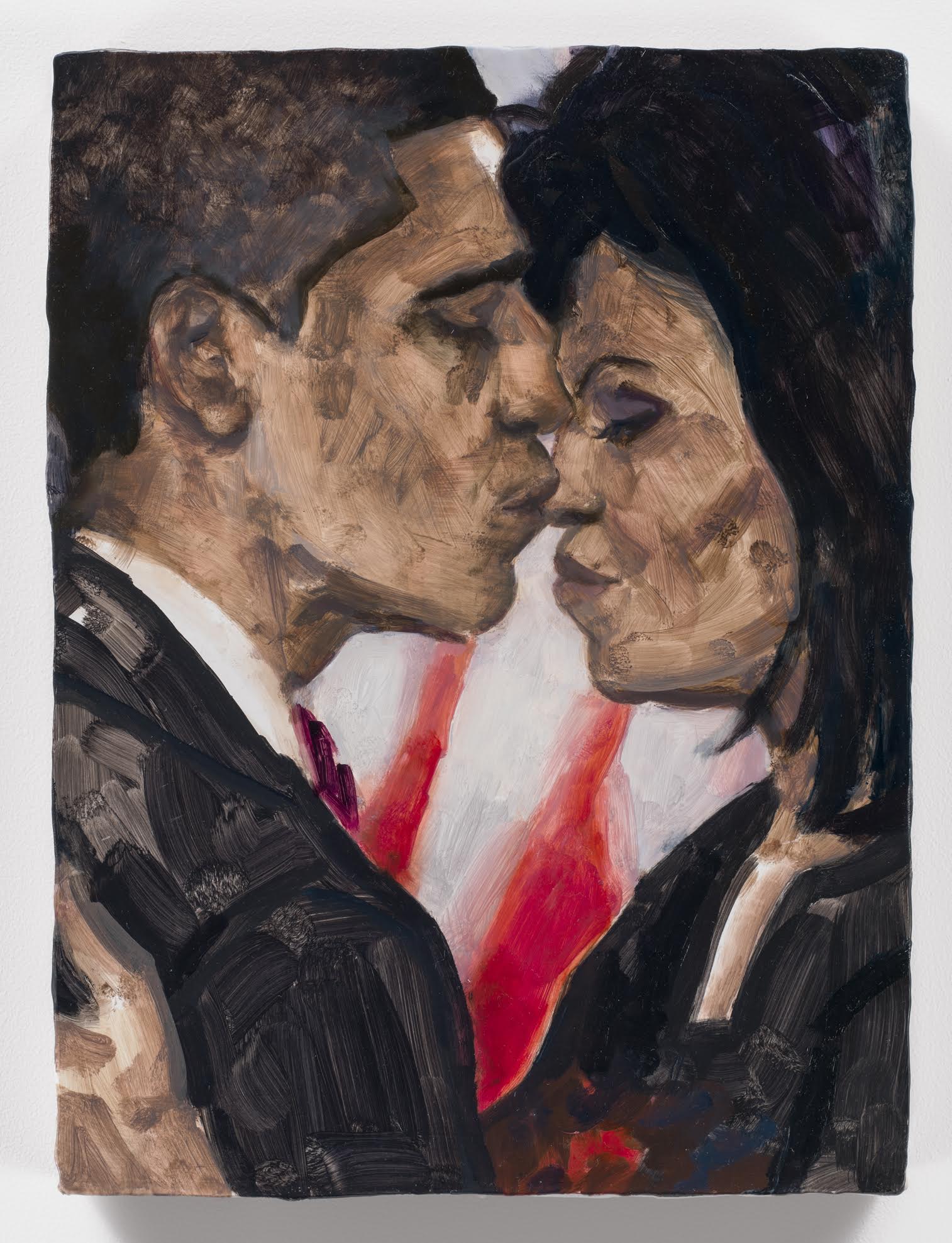 We don't know each other and I am leaping over massive protocol to call you by your first names, but I thought I would take this pre-Labor Day moment and catch up with you as you move into your last year as POTUS and FLOTUS which you might be grateful to shed as they have always sounded to me like some kind of microbial disease.

Elizabeth Peyton, the painter of this intimate, evocative portrait, is the one who has inspired this letter to you. When I saw it at the new Whitney, though its size is small, its impact on me was grand. And it reminded me how much art can influence the way we see things and capture a zeitgeist better than a news story. Peyton often works from photographs, but this, as many of her works, transcends its source material.

Over the last seven years, I, like many who supported the president through his elections and administrations, have had some very down days. I was frustrated and impatient with what I perceived to be your recalcitrance to engage with many of the issues we had elected you for. I knew you were so smart, and frustrated yourself. I was cranky with your inability to get these things done. I read with growing alarm how you had insulated yourself, and I understood that you had arrived underprepared for understanding just how much horse trading was involved in running this country. But I also understood that there were widening schisms in the country, continued reversion to the religious right and maddening luddite partisans, and I saw that at every turn, they were out to stymie your efforts.

Michelle, you did not want to be co-president Hillary. It was an adjustment we all had to make. You cared first of all about your husband and your two girls who have grown up in the glare of the paparazzi. I related to the protective way you might feel like any wife and mother. You didn't bake cookies, but you grew vegetables, and put your concerns about all children and their well-being foremost. You cared about clothes and about your friends just like I do. You tried to maintain a private life, an almost impossible task in our age of media celebrity. I understood that it must sting every time they had tried to undermine your husband's and your own sincere efforts to make our country a better place and that there were times you just wanted to chuck it all.

Barack, now that you are seeing the time you will be moving back to Chicago to resume something of a private life, you have begun to be much more forceful about the things you cared about, the things you promised. Of course it would have been wonderful to get this stuff done earlier, but you are getting it done, even if efforts to roll back gay marriage, environmental regulation and Planned Parenthood funding are in full flower as I write.

As someone who grew up in the era of intense civil rights momentum it has also been discouraging, to say the least, to see the slippage there as well, and I had hoped you would step up as our first black president and make some noise much sooner than you have. I was told by political operatives I know that you could not do this for varying reasons, but still, I remembered brave little Eddie Vanderlip who was the only black boy who came every single day on a big yellow school bus all by himself to my fourth grade class from the other side of our town -- the first northern city to have court ordered integration and also the home of Michael Schwerner (his mother, Mrs. Schwerner, was our biology teacher) -- and how we still need to honor what Eddie and Michael had done.

All things being equal, I imagine the two of you get into bed at night and shake your heads at the things you have seen and been part of, both good and bad. This letter is to encourage you in your last year of back-to-the-White-House to do what all good graduation speakers tell rising seniors and that you might tell Malia as she prepares to go forth into the wide world: Follow your passions. Don't look over your shoulders. Work your hardest. Take chances. Reach out to people who are not in your own circle.

A personal plea: Though the arts have not been your priority, please help keep Congress away from NEA funding, already eviscerated. Michelle, you came to the Whitney opening. I don't know how you reacted to seeing yourself in Elizabeth Peyton's beautiful painting. We need to remember how artists' work can make things easier to see, that together we must continue to make our country a more vibrant, transparent, clear-eyed, self-aware place.