It has often been the case that women artists who began by working with their lovers and mentors are seen by history as mere muses or helpmeets -- or worse. It has taken the span of decades and resourceful curators (often female) to ferret out the often groundbreaking creative work they themselves did. At the new Whitney, the focus on women artists is commendable. Just seeing the large and beautiful Lee Krasner rightfully placed in prime real estate instead of the cramped mezzanine stairwell gallery where it lived uptown shines a new light on this artist's fine work separate from that of her much more well-known husband, Jackson Pollock. 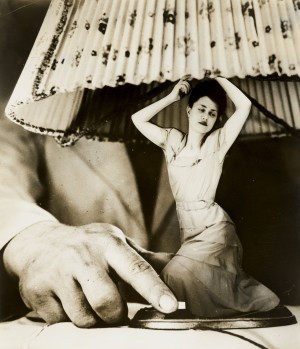 Grete Stern, Sueno No 1 Electrical Appliances for the Home, MoMA 1949

In the 1930s and 1940s, a small group of women photographers began to assert their artistic independence from the men to whom they had apprenticed themselves -- Dora Maar broke away from Picasso, Lee Miller from Man Ray, both becoming notable photographers in their own right. Another less well-known example is German-born photographer Grete Stern who is now the partial subject of an exhibition at the Museum of Modern Art. (The other half is devoted to her ex-husband Argentine photographer Horacio Coppola whom she met at the Bauhaus) Stern, who had trained at the Bauhaus in art and design became a student of Walter Peterhans, who himself had been greatly influenced by Lazlo Moholy Nagy and his wife Lucia, the great photography theorists. Suddenly, the advent of the illustrated press had presented new opportunities for photographers beyond pure journalism. A burgeoning film world also contributed to the proliferation of cutting edge technique and imagery. Photomontage became their currency for emancipation and narrative expression. 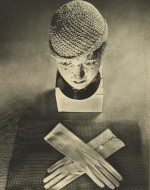 Stern impressed me first for her commercial work. The Bauhaus was not just an incubator of fine art but also of the applied arts and pupils did not disdain these media, or give them less creative attention. She formed a partnership with another pupil of Peterhans, Ellen Rosenberg, that specialized in portraiture and advertising. (The Bauhaus also seems to have been an environment where women could be nurtured and excel. A number of female pupils went on to have distinguished careers.) These two young, sexually liberated Jewish women were undaunted by any odds stacked against them. Stern had particular talent for experimental still lifes which demanded conceptual outline before the photographs were even taken. ringl + pit -- they called themselves based on childhood nicknames -- photographed each other, themselves, their talented friends, in makeup, masks, cross dressed, and played with notions of gender, femininity androgyny and dandyism. The images are filled with humor and sly wit. Rosenberg began a liaison with Walter Auerbach, a stage designer and Stern with Coppola and the four young artists formed a small collective of love and life. They were multi disciplinary, crossing over from art to photography to writing to film to design with a fluidity that could be an example for contemporary artists. They were part of an intellectual circle politically to the left not afraid to challenge the Weimar status quo. 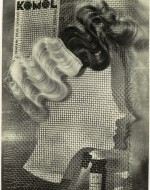 All fled Germany landing in London once the Nazis came to power. Stern and Coppola married in 1935 and left for Argentina. She continued her work in portraiture and design, eventually photographing the leading émigré cultural and political figures of the day -- which a poet friend called "facial nudes" for their unadorned perspective on their gifted subjects. On the commercial side, her photomontages called Suenos or Dreams, which accompanied a column on Freudian interpretation of dreams in a women's magazine are examples of surrealist imagery with a subversive feminist twist, and like Dora Maar, her intellectual reach and native cleverness made for some bold imagery which far exceeded the raw material. These are spectacular. Stern took as much care with the titles which she said were an integral part of the work.

Roxana Marcoci, one of the MoMA curators of the exhibition and author of the excellent catalog essay says, "Stern's pictures amount to a repository of personal, even intimate details about women's lives -- marriage, society, domesticity, labor and sexuality -- within a patriarchal society." Seemingly undeterred by displacement and the effects of the war, and perhaps even motivated by it, she continued -- at first alongside her husband -- to experiment with every possible technical aspect at their disposal. Barriers for her were a stimulus and not a deterrent." For Stern and Coppola, the question was not how prior conceptions of art could be used to define photography but how photography might redefine art within the social context," adds Marcoci. In particular, the magazine Sur was an incubator of their talents, allowing them the freedom to be progressive and intellectual at the same time as fine artists. (I neglect Coppola's oeuvre not because he was not an accomplished professional, but because Stern's mind and craft intrigued me much more than I had been led to believe by a middling New York Times review.) After their divorce (they were only married for eight years), Stern kept the house they had designed by experimental architect Wladimiro Acosta which became the center of a thriving salon. 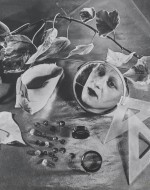 Stern, Self Portrait, 1943, Estate of Coppola

In addition Stern (and Coppola) took advantage of commissions to document Buenos Aires which makes the show an excellent counterpart to the Latin American architecture show a few floors up. 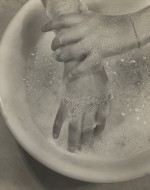 I think MoMA is to be encouraged to have curatorial departments working on thematically linked exhibitions more often. Dialing down on these personal lives as the vast architecture show was not able to do makes the work so much more intriguing.

If you are interested in photography, and especially an early radical, extremely creative feminist perspective on life and art, this exhibition will inspire you. "Stern succeeded in representing a new post-war feminine type:" says Marcoci, "a figure struggling to tweak authority and free herself from the ideology of marriage, the dynamics of sexual machismo and the burdens of motherhood" Here, here. It makes Instagram look like so much spinach, or as our Supreme Scalia said last week about the Obamacare decision, "pure applesauce". 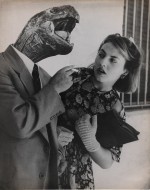