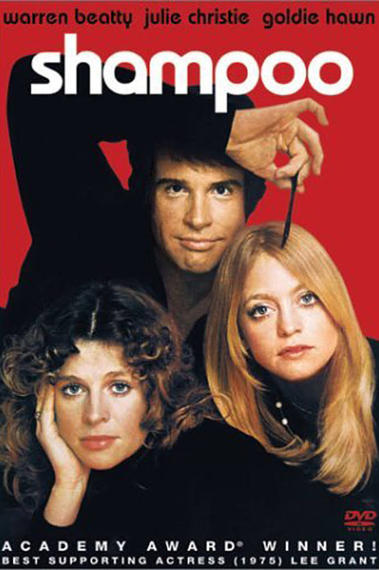 Ok, so you know the drill by now. I'm home, it's almost 2017, and I need to crawl into bed with someone exciting, sexy, dynamic, legendary, to lift myself up over the hulking mess of New Year's Eve. This year, I knew had to think big, really really big, especially big, to face down the looming disaster of 45. I combed the bestseller list for a Keith Richards or Richard Burton-equivalent (my previous NY eve boon companions), and all I could come up with was Bruce Springsteen and Robbie Robertson and no offense, I've never been a Bruce babe and as much as I like Music from Big Pink, after seeing the Scorcese docu I found Robbie a wee bit self-important and limelight-stealing from his fellow Band members.

As I was pondering this biggest of date nights, Carrie Fisher died, and I, like many others, rewound her career and came upon her first acting gig in Shampoo,

and there he was staring me in the face. Warren! Warren could help me enter 2017 and get me some moxie back: if anyone could cut through the miasma of DRT, it would be Warren.

The story of Shampoo is not that convoluted. Apparently Columbia Studios had been on a 'downward trajectory" in the early seventies (Have you heard of Lovin' Molly and Confessions of a Window Cleaner?) and made a decision they needed an expensive blockbuster to offset the losses. They turned to Warren Beatty who offered up a script he had written with Robert Towne a few years back. Theoretically Beatty and Towne were riffing on Jon Peters (who "did" Barbara Streisand et al and ended up a Hollywood producer) and other friends of theirs. But oh, I think even Peters never had it so good. It's Warren who is really the model for George the Hairdresser whose bildungsroman drives the film.

Shampoo not only holds up, it could easily be released today, no problem, what with sixties fashion back in and the subtle but itchy bitchy background of a miserable election eve 1968, with Nixon/Agnew beating out Humphrey (and you think we have troubles?) (It was actually a close election but Nixon did win the pop vote) 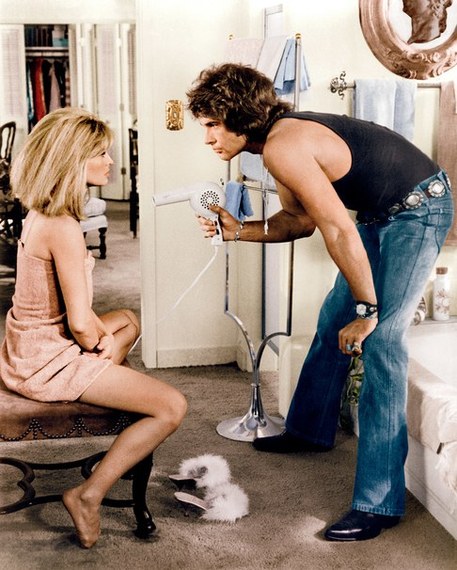 The plot, such as it is, revolves around the roundelay that ensues when George the hairdresser is pursued by all the women he's sleeping with as he tries to get the jack together to open his own salon. (When he goes to the bank to get a loan, the banker says, "Do you have any references?" And George says, "I do Barbara Rush." (a popular actress of the time, one of the few period markers that date the film), and when the banker asks for a financial statement George replies impatiently, "I got the heads.")

The movie was directed by cool-hand Hal Ashby, but as Lee Grant, who played one of George's conquests in the film, tells it in her memoir, it really was Beatty whose persona infected the whole project. "Warren loved women. Loved them with a ravenous appetite the way my husband, Joey, yearned for food". According to Grant, during the shoot, Beatty came to give her notes when she resisted what was written in the script. He tried to give her the motivation as to why her character, Felicia, was willing to carry on even after she caught her daughter Lorna (Fisher) with George in flagrante.

"Listen," Beatty told her. "A friend of mine had someone going down on him under a desk. His girlfriend walked in, walked out again. She never saw it. Didn't choose to know. She blocked it out." "Maybe she knows that's what comes along with the territory," Grant said. "No, no," said Warren, "I really know this, women just don't see what they don't want to see!"

That's sort of how I felt about all the people who tumbled into bed with us on New Year's, cause well George apparently just didn't know how to say no. I don't normally like to share but suddenly there was Jackie (Julie Christie), the mistress of a rich Angeleno, Lester (Jack Warden), his wife Felicia (Lee Grant), their daughter Lorna (Fisher), and George's sort-of-steady gf, Jill (Goldie Hawn). So in actual fact it was a ménage a cinq and it was hard not to get tangled in all the gold chains and bell bottoms and fringe and hair and leather.

Anthea Sylbert the costume designer who dressed them claimed that in the '70s men "did, in fact, open their shirts to the navel and hang seven thousand things around their necks; they started to become peacocks, in a funny way to become sex objects."

So who are really the sex objects in the film? The women, or George? Is the film feminist or not? At first you think it's George who's in control. But George is the one who has the comeuppance. I tried not to reflect too much on that as I know Annette is a feminist and she is the one who tamed Warren after all and I don't want to get in dutch with her about New Year's Eve. Somehow Warren seems to have been able to keep most of his lovers as good friends after the fact; I read that Julie Christie and her husband stay with the Beatty's when they are in LA. I mean you'd have to be crazy not to want Warren as a friend even after he had moved on.

As George says about his plethora of partners after Jill presses him on the subject, after she's caught him fucking Jackie:

"Let's face it. I fucked them all.That's what I do. That's why I went to beauty school.They're always there, and l...I don't know why I'm apologizing.So sometimes I fuck them.I do their hair. They feel and smell great. I'd be on the street...at a stoplight, or go into an elevator. There's.....a beautiful girl. I don't know.That's it. It makes my day.It makes me feel like I'm gonna live forever"

Or, after he's pressed by the cuckolded Lester who wants an explanation from George about why both his wife and his mistress are sleeping with him:

What the hell I'm a gonna tell you about what they got against you. Christ, they're women aren't they? You ever listen to women talk, man? Do you? 'Cause I do, till it's running outta my ears! I mean I'm on my feet all day long listening to women talk and they only talk about one thing: how some guy fucked 'em over, that's all that's on their minds, that's all I ever hear about! Don't you know that?....Face it, they know we're always trying to nail 'em and they don't like it. They like it and they don't like, it's got nothing to do with you Lester. It just happened.

Thankfully Lee Grant and Sylbert and Fisher wrote on the record after the fact. Warren, not so much. He famously likes not to get in the way of his movies, unlike George who realizes he can't get out of his own way. George is so nice, he wants to please everyone, he doesn't have a mean bone in his body. He reminded me of Albert Finney's Tom Jones, whose women also kept him from concentrating on the task at hand.

Ashby got the self-absorption, the politics as social currency, the décor of LA and its people with perfection. There are so many vivid celluloid moments its almost impossible to catalog. Still, I must highlight the moments that made me sit up in bed:

-Jackie in everything she wears but especially in the first view of her killer backless black sequined dress as they enter the election eve viewing party -George checking himself out in the mirror while she's talking to him -Felicia and Jackie glaring at each other while the men talk over them at the party -Jackie going down on George under the table -Jill breathing into a paper bag that George hands her to calm her moments after he has left Felicia in bed -George devouring an apple (could you get any more on the nose?) -The latticed hair salon; (I would love to have been there when they taught Warren how to do a blow-out) -The quintessential groovy sixties party with stoners, swimmers and sex -The moody soundtrack credited to Paul Simon

Lorna/Fisher is the youngest and sassiest of the women, the only one who seems able to truly to meet George, the randy, insatiable, bedroom-eyes hairdresser, without flinching. First, to drill down on whether he's sleeping with her mother. "Do you want to fuck," she finally says in a not-so-subtle revenge scheme in her Lacoste tennis tee and white headscarf as she puts out cold cuts, baked apple and chopped liver for George who is waiting for her mother (Grant) to come home so he can "do her hair". (Doing someone's hair, after you see Shampoo, it's the earlier iteration of "Hiking the Appalachian Trail")

After I re-watched the film twice, I tried to count the actual times I had ever "met" Warren because of course you can't have lived in LA and NY and worked in the movie biz and not have run into him at some point. If you want to know details which of course you do, I will tell you that once after the film was released, I was leaving my apartment in Manhattan and I crossed 76th Street and Madison and WB was crossing the other way heading back to the Carlyle where he often stayed and he came up to me and said--I kid you not--"Don't we know each other?" And I laughed and of course was flustered and smitten and flattered and mumbled something about how maybe we had met at a screening, but had we, in fact? Another time some years later, at a rubber chicken dinner in LA when a friend of mine, a powerful lawyer, was chatting with me, Warren came over to the table and joined our conversation, I guess cause by then, in fact, we had once said had actually said hello on 76th street. The three of us stood chit-chatting for a few minutes while I endeavored to be extremely witty and tossed my hair around quite a bit. That is the alpha and the omega of my interaction with WB, scouts honor.

The movie is available on Amazon and I Tunes but it's not streaming. I think if it were streaming you'd probably see a run on Drybar (though I think most of their operators are female.) Lester thinks George is gay at first, and Lorna asks him point blank. It's a total send up of straight perceptions.

Anyway what a night it was! The morning after it was hard to remember what had happened except my hair looked surprisingly great, I had bangs again and it was really bed-head-y full. I put the sunny SoCal Beach Boys Wouldn't It be nice on my phone since that's what's under the Shampoo opening and closing credits and I felt so empowered, I signed right up for the Women's March on Jan 21.