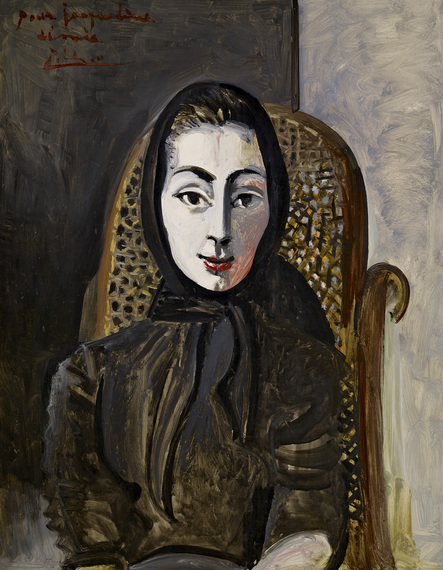 At Pace Gallery, where Arne Glimcher has kept his eye on the Picasso prize too, (both the Gagosian and Pace shows over the years have been linked to the heirs being ready to sell some of their works), Jacqueline, the last wife, is given her due. 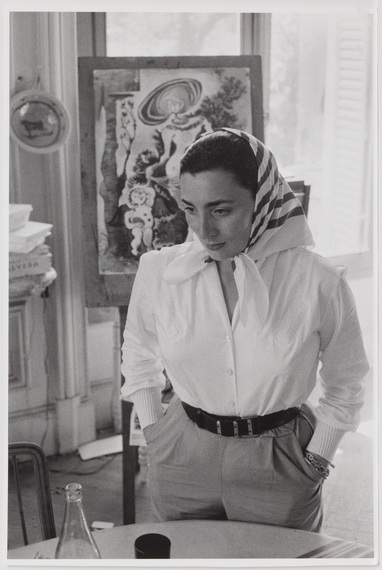 The message from the Pace Gallery is that Jacqueline was the most influential woman in his life and he the most prolific of his entire career. It is evident that she doted on him and made for him a life that was calm and serene. That is not to say that the work is his best. During these years, Francoise Gilot, his previous significant other with whom he had Claude and Paloma wrote her kiss and tell memoir that shot a cannon hole through the family.

At the time of our documentary, Alexander Liberman, editorial director of Vogue who had become a friend of Picasso's and taken many photographs, was, like many at the time, rather dismissive of the Jacqueline period. Liberman noted the constant presence of the old masters during these years and that Picasso saw himself as a continuation of their grand tradition. But he reminded me,

"Picasso was a clown on one side, and a tragic, insecure, sad man" on the other. He had doubt like any great artist. He was always questioning, and was superstitious. His images of death and destruction were a way back to life and creativity." 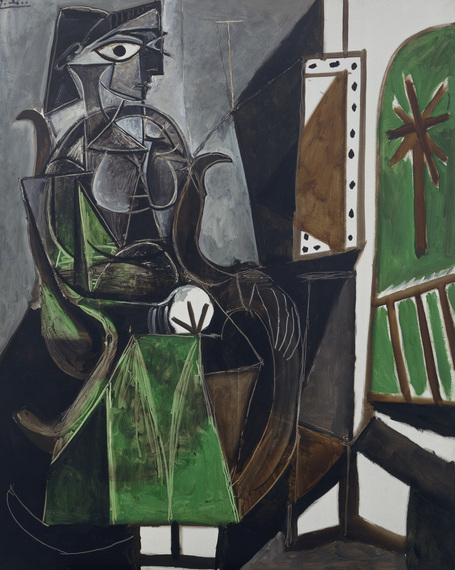 Pablo Picasso, Femme Prês d'une Fenêtre [Woman by a Window], June, 1956 The Museum of Modern Art, New York Picasso was compromised physically towards the end of his long life and like Matisse, he was less able to work at a very large scale as he aged but also somewhat constrained both by his increasing fame and this rather suffocating domesticity that was eventually imposed. 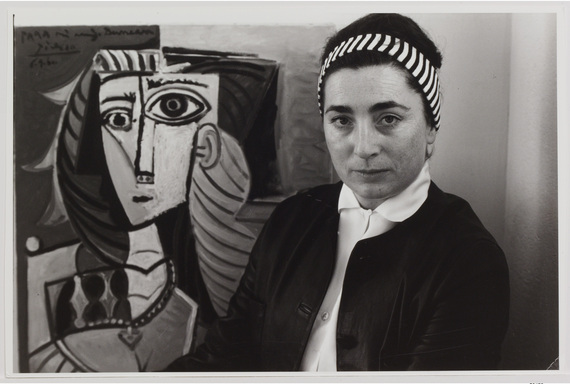 David Douglas Duncan, Jacqueline Wearing Headscarf and Posing in Front of her Portrait In fact I have come to love the muddy fifties greens and rusts of this mid-century period. Jacqueline became the model for the many series based on the old masters and one sees how her classic beauty (Picasso liked strong noses), lace up sandals and headscarves captured his attention. I enjoyed both of the Pace collections, but I preferred the work at 57th street, probably because it is more intimate. (Downtown are mostly paintings, uptown works on paper.) The David Douglas Duncan's, (a photographer characterized by one of the MoMA curators at the time of our documentary as "an affable high liver") are a marvelous series of photographs of the two of them. One photograph of Picasso showing Jacqueline what is supposedly a Spanish folk dance pictures him in a real fifth position which he could only have learned from Olga long ago. His turnout is fantastic for a man his age! 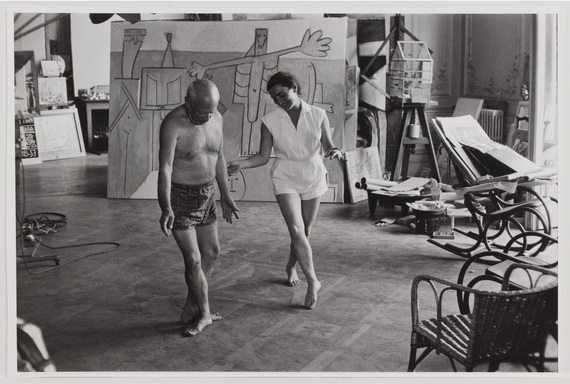 David Douglas Duncan, Jacqueline and Picasso Dancing in the Studio Whether they look imposing, highly sexualized or catlike, Picasso's women are so specific and recognizable and so clearly part of the fabric of his inspiration and imagination. A friend recently told me she's not able to look at his work without thinking of how badly he treated them. I think if we judged all art by artists' (or writers!) personal lives we would be conflicted most of the time.

(The Leonard Lauder collection now on view at the Metropolitan Museum gives yet a third view of how Picasso incorporated his life into his groundbreaking work.)

Picasso was not always a nice man, an indifferent father, a capricious lover, he blew hot and cold. He was the center of attention, larger than life, all descriptions which may make our hair stand on end. But the work and his life story continue to fascinate and repel. He defines the myth of the modern male artist: powerful, prodigious, petty, surrounded by women who are ready to give everything up for him, willing, for the most part, to share in his plentiful riches and access. 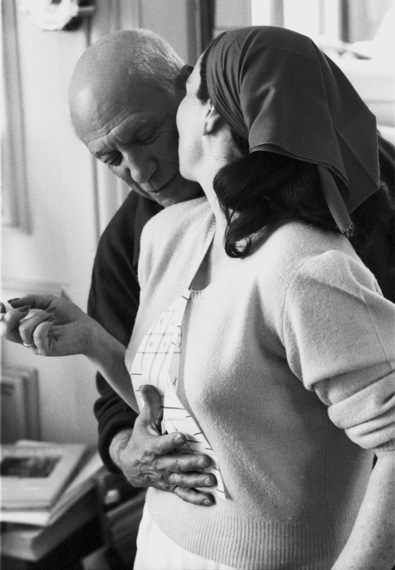 David Douglas Duncan Picasso Hugging Jacqueline with his Hand on her Stomach Photography Collection, Harry Ransom Center, The University of Texas at Austin

He made people feel more alive when they were around him.

Some may say Matisse (now at MoMa) was the more genuinely productive at the end of his life having found a way confined in bed that still allowed him to work at a large scale with the help of assistants.It is said that Picasso went to visit Matisse with whom he had a contentious but immensely respectful relationship and kissed his hand. After his death, he returned to visit Matisse's Venice chapel. One of the nuns reportedly went over to him and said, "I'm so happy to see you here Monsieur Picasso, because Monsieur Matisse often talked about you. One day he pointed to the paintings and said to me, 'I don't know what they're really worth but there's only one person who's entitled to criticize me, and that's Picasso.'"

That we have so much work of these two masters available to us in NY concurrently is an enormous gift.