I was recently in Italy, far away from the Brussels bombings, yet I received many many emails and texts from people worried about my safety. In actual fact, I had been closer to the San Bernadino events than anything in Europe (though mighty close in London for the subway bombings in 2005.)

I'm here to affirm that Italy, at least northern Italy, is in absolutely fantastic shape, in fact I've never felt more secure despite the fact that Italy's economy is in disarray. The streets in Milan and every other city I visited were immaculate -- new highways under construction, the people helpful, the food as wonderful as ever, the cultural sites mostly in splendid condition. The Duomo in Milan, like Notre Dame, is so clean as to be unrecognizable. Easter was approaching so there were elaborate chocolate confections and cakes in many shop windows, but it was not high season for tourists. It seems migrants are bypassing Italy and heading north, because there is no work for them so this hot potato political issue is not as present. A terrorist was arrested in southern Italy just after -- obviously I have no inside information about what is happening in that regard.

I can only say that Milan is having a renaissance which began with the Venice Biennale last year, then went on to Expo and now the Design Fair. People skip Milan because they haven't heard much about things to do there if they are not in the fashion business, but it is one of my favorite places.

If you are lucky, you can stay at the Four Seasons, which is really one of their most beautiful spots in the heart of things in a converted convent/monastery.

But even without those resources, you can now eat dinner in an medium security prison In Galera, where the chef and servers are inmates and the food very good. The woman who began this effort did it as a way to help the prisoners re-integrate into society but now society is coming to them. 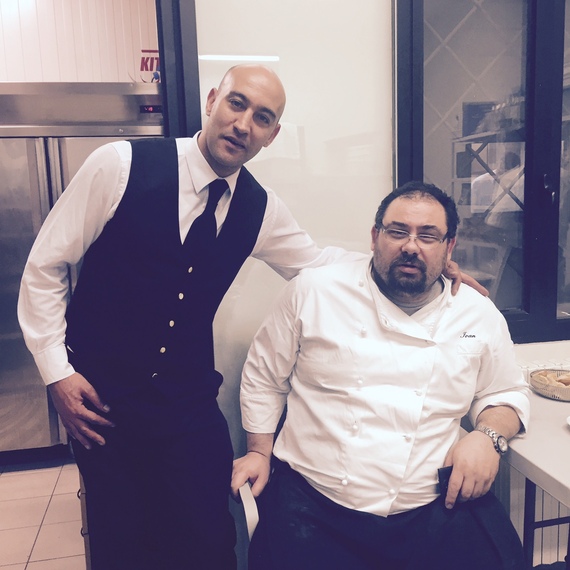 In Galera server and chef 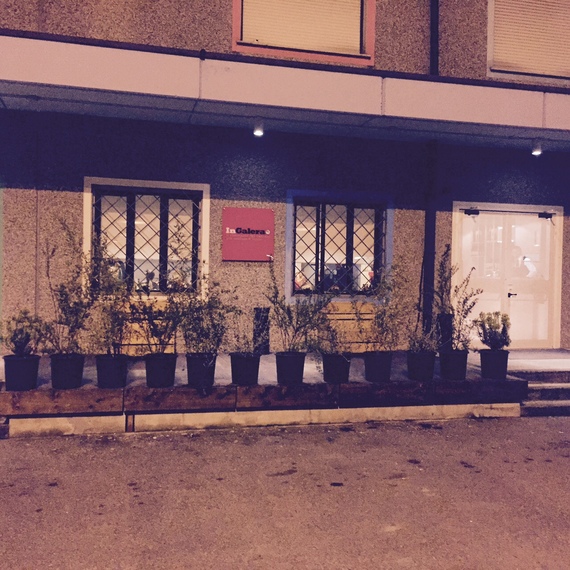 Exterior view of In Galera restaurant, in the medium security prison

You can visit the elegant Villa Necchi by the architect Piero Portaluppi which looks exactly the same as it does in the film I Am Love, it's within walking distance of the fashion district and has a cafe where you can imagine yourself to be every bit as elegant as Tilda Swinton. 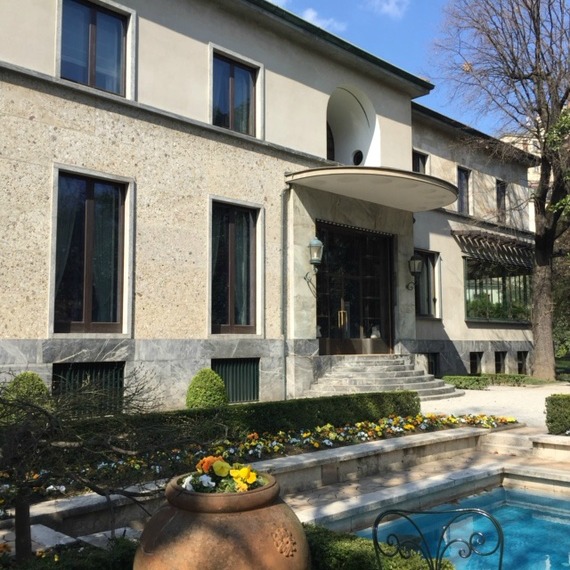 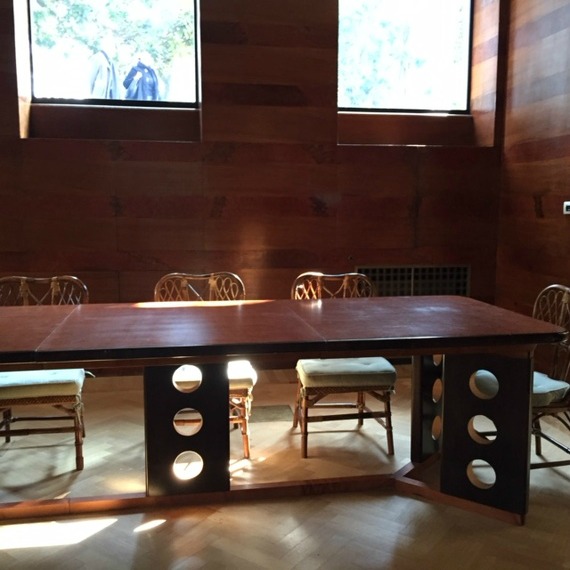 You can eat at the tiny La Latteria family run restaurant that is worth the wait (no reservations).

You can visit the Prada Foundation, Rem Koolhaas's latest collaboration with Miucca Prada which is filled with interesting mid century Italian paintings from her collection, temporary exhibits that fit in the vast glass walled pavilion or in the subterranean vaults below. 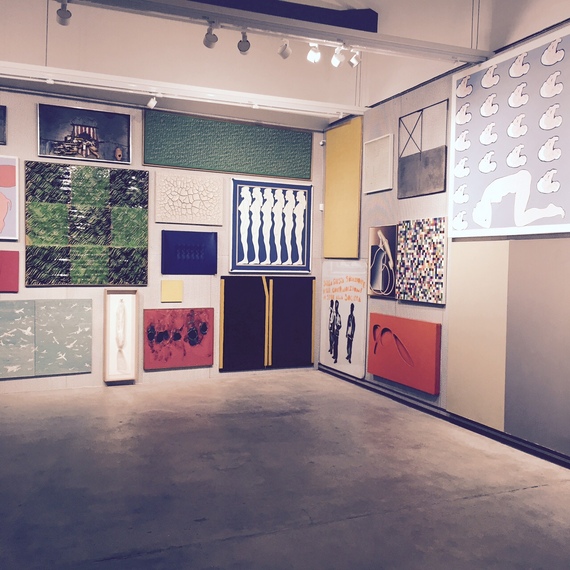 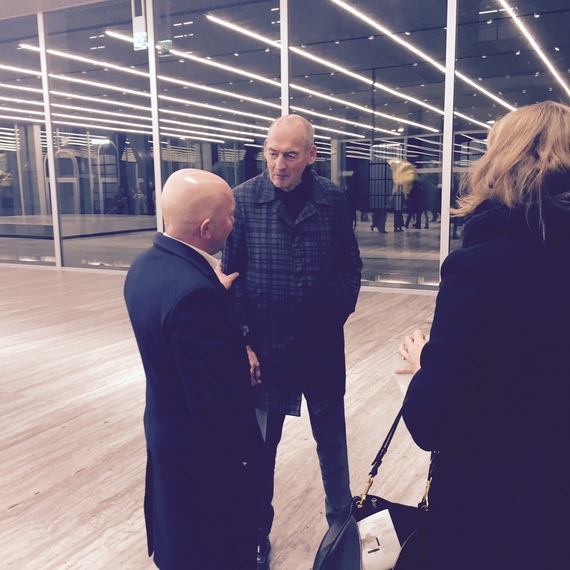 Rem Koolhaas at his Prada Foundation 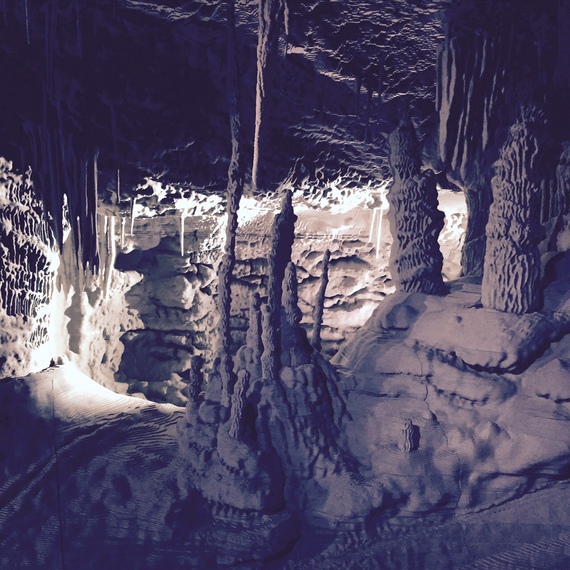 You can drive just north to the nondescript town of San Vito di Altivole which unexpectedly houses one of the most beautiful, elegant monuments to death, the Brion Cemetery designed by Carlo Scarpa with its Frank Lloyd Wright and Japanese influences. If only we could all envision ourselves at rest in a sacred space like this one. Unlike the Duomo, it is not supremely well-tended, but this only adds to its character. 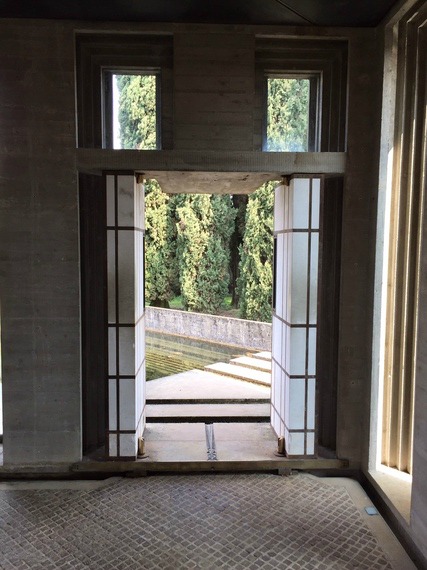 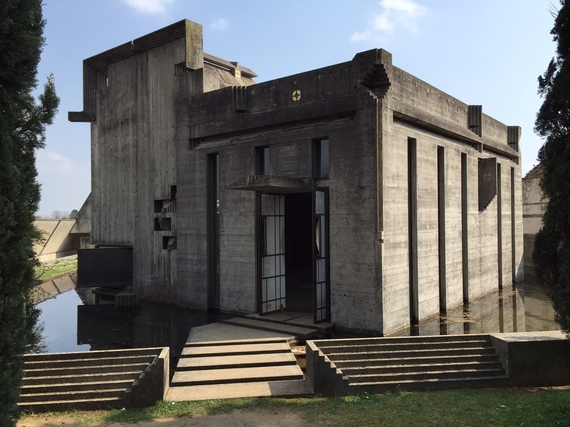 Scarpa died after a terrible fall down a set of stairs in Japan, but is buried here.

I wrote last year about Scarpa's Olivetti showroom in Venice, and his Querini Stampalia museum as well as the garden at the Biennale main pavilion so I was on the hunt for Scarpa this visit with passion. His Canova museum was alas closed, but a short distance away in the tiny hill town of Asolo the Villa di Maser by Palladio, is a faded yellow pile of a place, which was opened by dedicated owners who live there with their many tiny dogs and horses grazing in the front yard overlooking the vineyard across the road, a bit of locavore domesticity mixed in with the Unesco-heritage columns and architraves. 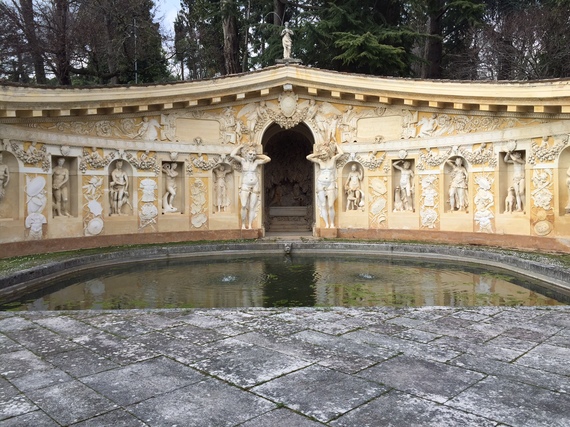 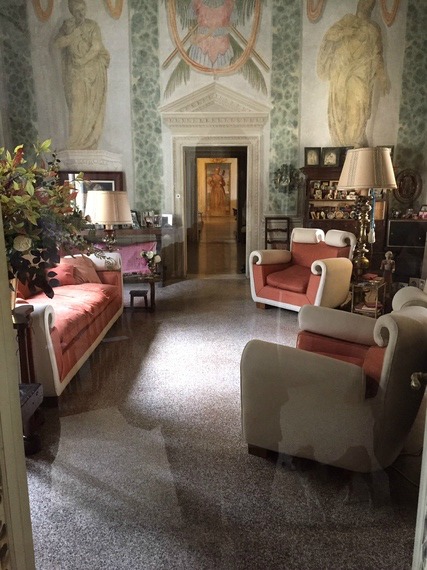 Just a little over an hour away is the Romeo and Juliet city of Verona, the site of two other Scarpa sites: the elegant Castelvecchio fortress redone by Scarpa from 1958-64. 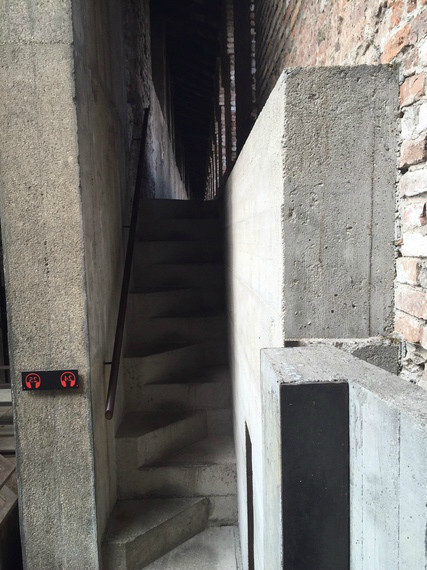 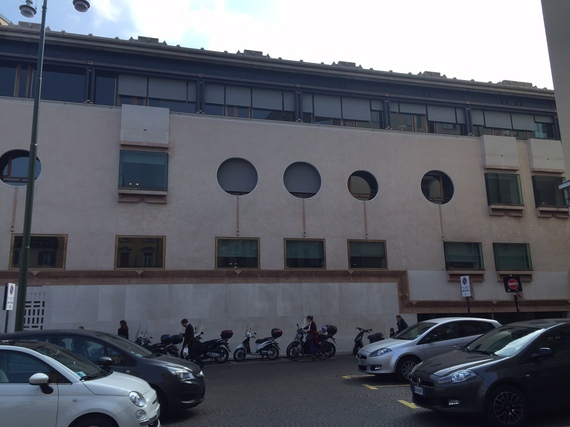 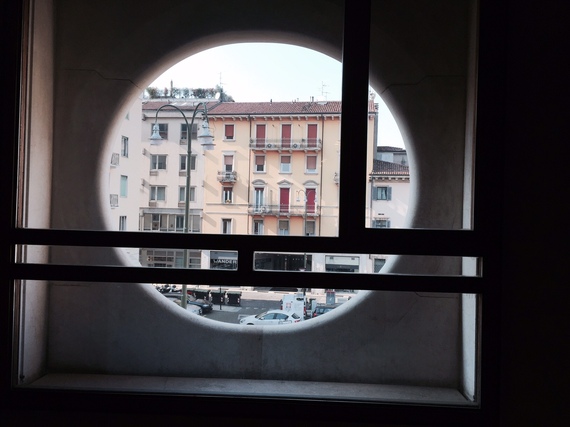 The recently refurbished also marvelous Banco Popolare di Verona of Scarpa, with its echoes of Louis Kahn can now be visited on special days -- you need to check with them in advance.

The Italians are gradually revisiting and restoring much of Scarpa's work in the region he loved so well. The lovely catalog you can get at the Banco says Scarpa "worked best when subjected to strong constraints because he possessed the uncommon ability to transform weaknesses into strengths."

(You can also visit the deserted 19th century Verona synagogue which is very well-maintained for the only 60 remaining parishioners just by ringing the bell.) 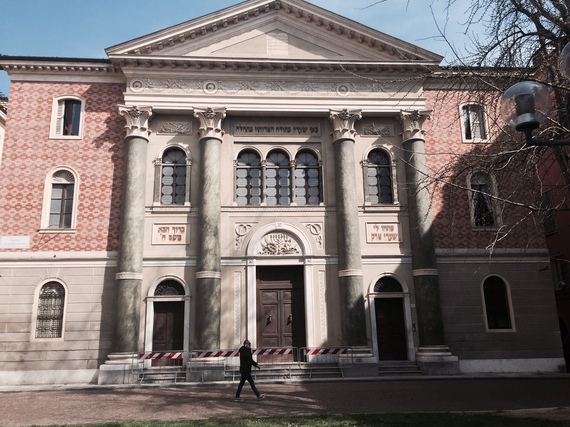 Once I had my bellyful of Scarpa, I stole away to see the expansive Maria Callas exhibition in the Arena Museum. Callas is newly vibrant and original in this vast exhibition of photographs, clippings, clothing and history, and only looks more glamorous with the passage of decades. 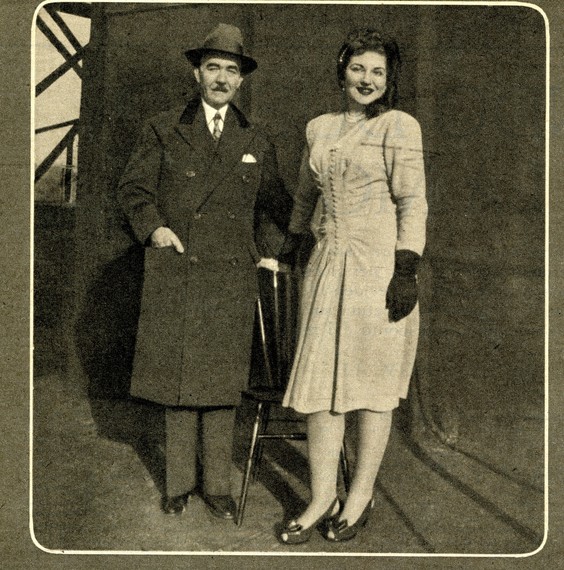 I didn't know that she had been born in Queens, was chubby in her early career and then starved herself to become the woman she she felt her onstage heroines deserved. Her wild ups and downs as the most famous opera diva in the world are duly recorded as well as her most public and humiliating rejection by Ari Onassis after their two-year affair which ended in Onassis abandoning her for Jackie Kennedy. She had many elegant dresses and costumes custom made, but also wore this black leather jacket which made me feel she may have had a street side that she never entirely forgot. 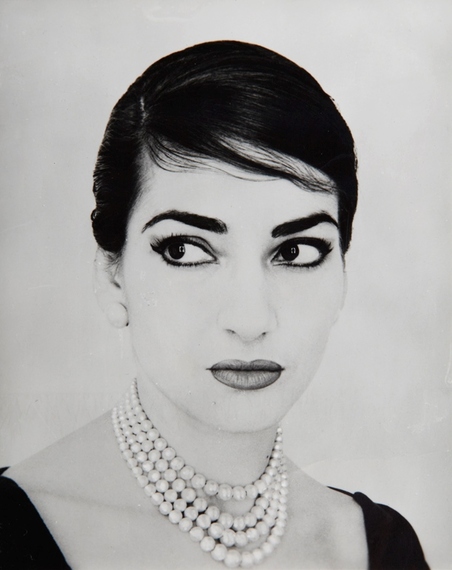 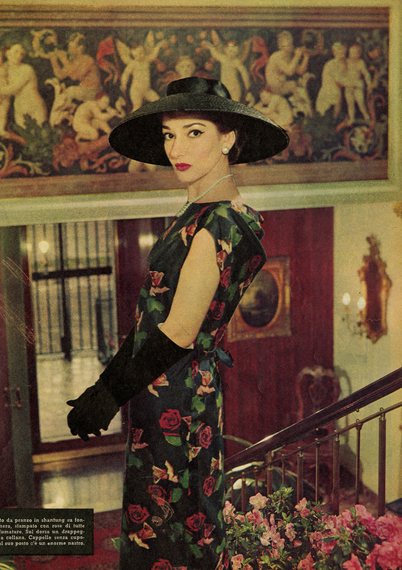 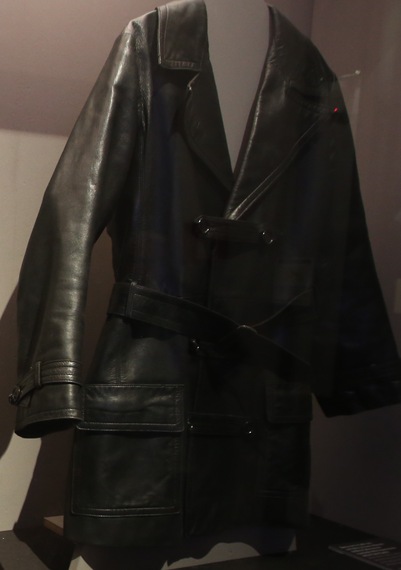 Maria Callas in her early career, then later, and her black leather jacket.

Callas, like Juliet, had a tragic ending. She died in Paris at 53 where she was living a cloistered life after a bumpy retirement. (Some say Onassis continued to see her.) She should have requested to be buried at Brion (she is interred at Pere Lachaise) where she could have kept company with Scarpa who is buried mummy like. I don't think Zaha Hadid designed a cemetery, but she might also like this resting place next to another architect with singular vision.

Many are wondering if travel to Europe is safe. It will be tragic if our ties to this beloved continent are ruptured by terrorism. In Italy, they are awaiting Americans with open arms. Do go.