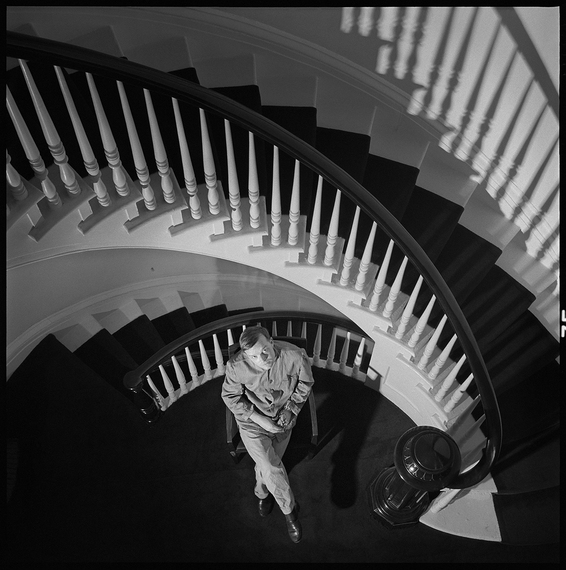 Underneath this very majestic staircase in the basement apartment, Truman Capote was putting the finishing touches on his pearl-of-a-girl Holly Golighty in Breakfast at Tiffany's. By day he would write, often after a night amidst the cat-filled alleys, dinners at Gage and Tollner or Joes, or he would distract himself with buying trips to Knapp's emporium for the paperweights and knick knacks he so admired.

This was Brooklyn Heights, the first landfall after Wall Street, historic home to literary geniuses (WH Auden, Thomas Wolfe, Henry Miller et al) but originally home to sea captains, then righteous and upstanding parishioners under the watchful eye of abolitionist minister Henry Ward Beecher (Harriet's brother), the most famous preacher in the U.S., and his Plymouth Church that was a way station on the Underground Railroad. 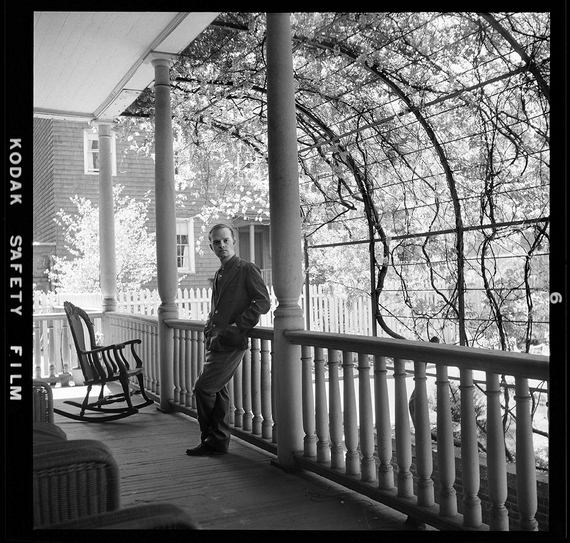 Truman Capote on the porch of 70 Willow by David Attie

Truman was a tenant of his friend theatrical designer, Oliver Smith, in the yellow house at 70 Willow from 1955-1965. It was in this underground lair that he also became obsessed with the midwestern murder that became In Cold Blood. 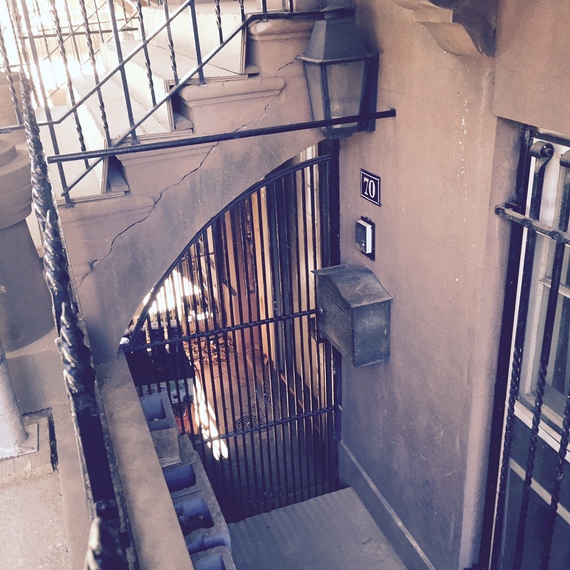 Those 10 years may have been his most productive. The neighborhood is remarkably calm and charming, beautifully well-preserved, the small federal and colonial row houses alternating with low-rise multi stories, brownstones and occasional gingerbread carriage houses, "sly alleys and tucked away courts." The Esplanade is at the end of the block, the views of lower Manhattan and the Statue of Liberty picture perfect. 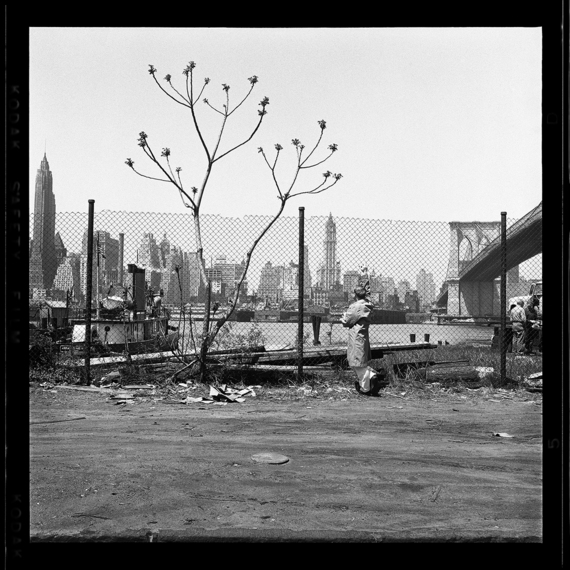 Truman Capote at the Esplanade Fence, by David Attie

It's hard to imagine the later Truman of the UN Plaza high-rise and the supremely French-elegant La Cote Basque restaurant here. The only Black and White Ball I could see in Brooklyn Heights was a soccer ball on the spacious new fields that stretch out into the bay. Do you think Babe Paley or Gloria Vanderbilt, two of Truman's Swans ever crossed the Brooklyn Bridge? Why right around the corner is where they captured "Bridge of Spies" Russian mole, Rudolf Abel.

Now, no matter where you live, you can get back to Capote's Brooklyn with its eccentric rich old ladies, multi-ethnic sailors, also home to drunks, dead horses in the street, "brats" that rollerskated and juvenile delinquent gangs because of a marvelous stash of photos of Capote and his Brooklyn world discovered by the son of the photographer David Attie which has been published along with the original essay he was commissioned to write about his 'hood for Holiday Magazine in 1959, in Brooklyn: A Personal Memoir by Truman Capote. 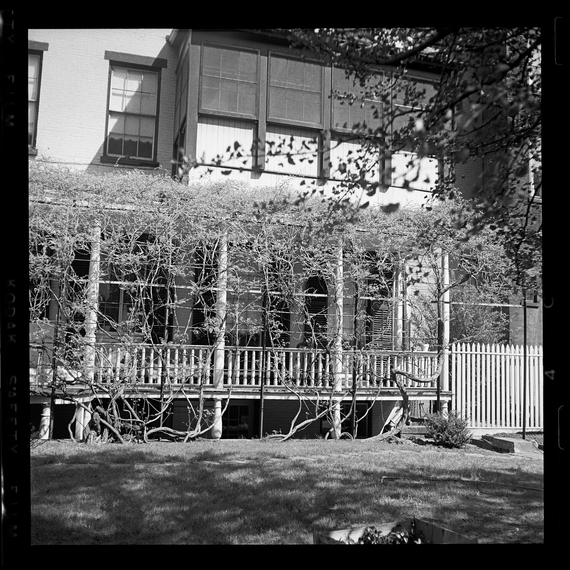 The rear of 70 Willow Street, photograph by David Attie

John Knowles (A Separate Peace) had brokered Truman's commission and been at the 92nd Street Y when he showed up to read in a black velvet suit and blonde bangs. 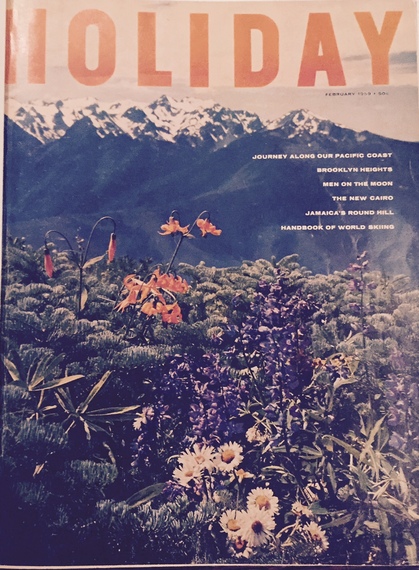 The issue of Holiday Magazine in which the essay originally appeared 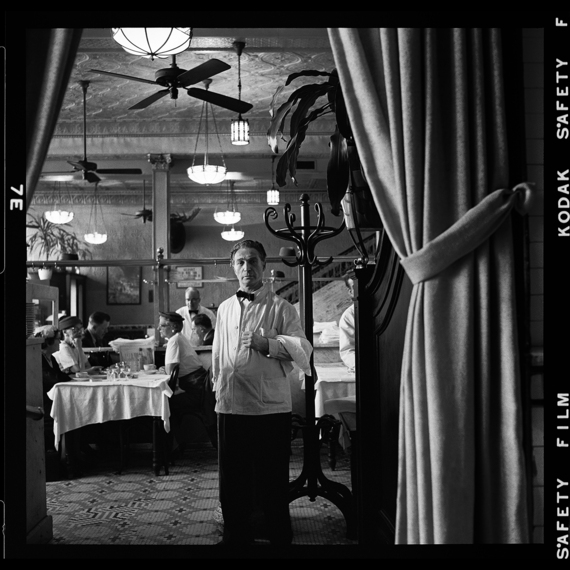 The neighborhood is now fully gentrified, expensive, the chain link fence replaced by cultivated cul-de-sacs and the waterfront in the midst of a massive development. The once yellow house at 70 Willow is now covered with scaffolding. 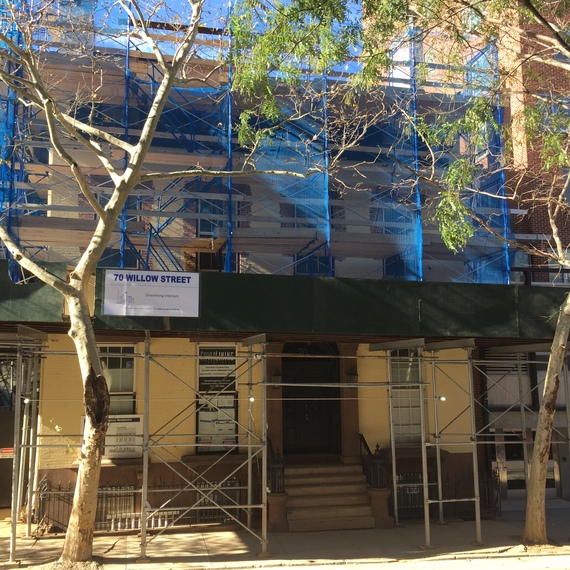 It looks to be a complete remodel, not a restoration. (Hey Hedge Guy! Hey Landmarks!) But you can still see where Capote lived and worked and get a feel for the man who invented the highly original Miss Golightly (who was much more scandalous in the novel than in the film) and the mind behind the dark, twisted murder which came to obsess him. 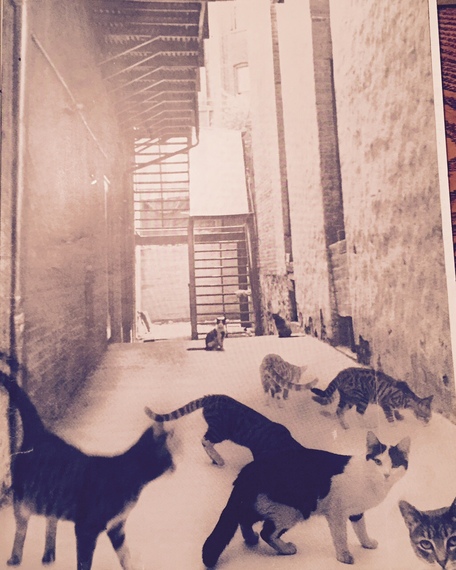 At the same time that Capote was ducking the Cobra gang members who taunted him, there was my grandparent's Brooklyn, the lovely substantial brick houses of Sheepshead Bay near Coney Island, the copious food of my grandmother, the purple carpeting, the flocked wallpaper; the multicolored Lifesavers in my grandfather's drawer, the dinners at Lundy's, the huckleberry pie pan I still have from there, the walk to the shul nearby to sit up in the balcony with the other young girls and women. It was just across the borough but worlds away. 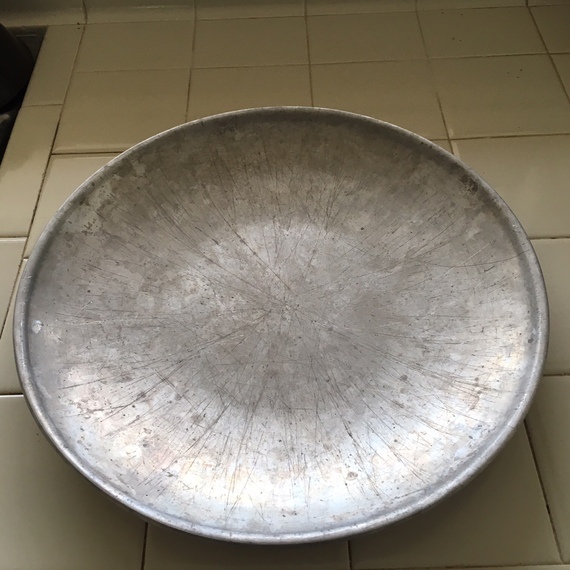 Now there is the hipster Brooklyn of Williamsburg and Bushwick and Red Hook, (Capote called their noms de quartier "aggravating") and Brooklyn is the most artistic and fashionable of boroughs, where all the writers and artists still want to live and the one that has all the restaurants the NY Times now reviews that I know I will never get to because I live in staid upper east side Manhattan where the restos close at 9 and you feel old just by walking in them. 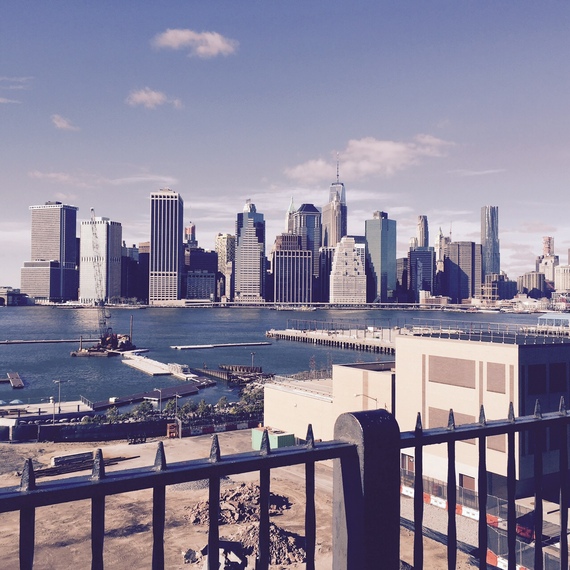 The trains are not running that well to Brooklyn these days due to construction: I recommend the number 2 or 3 to Clark Street where you can emerge and instantly imagine bumping into Truman in his black velvet suit just around the corner.

Before you go, avail yourself of Breakfast at Tiffany's, In Cold Blood and Truman's memoir of Brooklyn with the Attie photographs here.

The Brooklyn Historical Society is up the street with its beautiful second floor library if you want to delve further.

The exhibit "Coney Island: Visions of an American Dreamland, 1861-2008" presents works from artists like Diane Arbus and Joseph Stella.