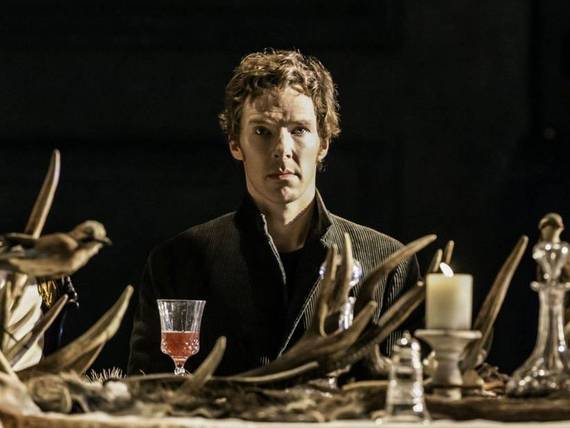 Author's disclaimer: before you pounce on me with outraged shrieks for "reviewing" a preview, these are my impressions from the preview of 11 August. The new production of Hamlet at the Barbican Centre, London, starring Benedict Cumberbatch as the Dane, opens August 25. Proper reviews now ensue; read them. Some of the things I liked most (Cumberbatch's performance; Ciarán Hinds's command of every scene he's in) will only have strengthened by opening night. Some of the things I thought awful (dire direction; the choices of textual cuts, and rewriting Shakespeare's language) will perforce remain.

We bought tickets a year ago, and gathered with friends, making a pact not to talk about the show until it was over. From the first row of the balcony, a couple of stories high, we could see the whole vast sweep of the Barbican's mighty stage, which is spectacularly but strangely used. The great hall serves as everything from the battlements (badly) to the graveyard, and the way it decays as the play goes is excellent.

Why the play began with Hamlet strewn like a lovely throw-rug across the stage, mooning over a turntable, inhaling the scent (presumably his father's) on an old military jacket and then launching into "To be, or not to be" was self-evident. People are coming to see Cumberbatch. If people know anything about Hamlet, they know the first line of the most famous soliloquy in the play. Director Lindsey Turner served up first what's most wanted. It is not a decision I liked, though it has power. An inappropriate Nat King Cole record spun into silence, and The Star spoke The Big Speech. The mad miraculous beginning of the play, with frightened soldiers on the battlements, in the mist, at midnight, uncertain of identity or friends, reality or imagination, was entirely lost.*

Hamlet is a notoriously corrupt text -- or texts. It's a stack of foul papers, and there is no definitive version of the play. Yet to take some sort of imagined advantage of this by hacking out many of the play's best lines, and chopping and changing words, phrases and entire scenes to stick them in unfamiliar mouths and places, was for me the worst thing about this production. Hamlet is no sacrosanct work of theatre; I enjoy productions that recognize its changeable vitality, and tamper with it. Tom Stoppard's Rosencrantz and Guildenstern Are Dead is one of my favorite plays. Yet I was disconcerted from the start. Why should Hamlet be the one asking "Who's there?" and why should it turn out to be Horatio? If you're going to do something like this in the theater, it has to have a point. I saw none. The point seemed simply to simplify. Do that to Hamlet, and in the end you'll find you have eliminated its passion, joy and emotion. Cumberbatch valiantly works to keep all those things present in this play, but he needs Shakespeare's language to fly with him.

This said, Cumberbatch is radiant on stage. In a play increasingly a star vehicle -- and I have seen Hamlets from Daniel Day-Lewis (the best, at the National Theatre in 1989) to Ralph Fiennes, Stephen Dillane and Jude Law -- Cumberbatch joins the ranks competently. Gone is the Sherlock goth-black dye job. His tumble of chestnut curls is in its natural state. He delivers lines and expressions to the whole theatre, chin raised to show his face clearly. It is slightly heart-shaped, which I hadn't realized before, and this exaggerates even more his vari-colored greenish eyes, chatoyant and huge. 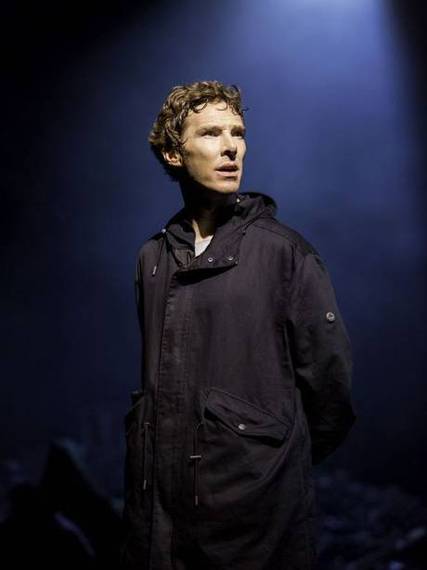 Cumberbatch's finest moments are the "O, what a rogue and peasant slave" soliloquy (II.ii), and his two brief speeches to Rosencrantz and Guildenstern. His "I have of late -- but wherefore I know not -- lost all my mirth" (II.ii) is superb, as is the stinging speech in III.ii likening himself to a flute upon which they seek to play. He roves the stage energetically, still confined and infantilized as a boy prince, a man who should be king but for his uncle's wicked intervention. Hamlet dressed as a toy soldier, playing in a castle he drags into the great hall, makes this point particularly, and Cumberbatch is brilliant in his frustrated rage. He also excels as Hamlet the actor, literally taking the part of one of the performers (the poisoner nephew) in "The Mousetrap." Yet the lines that cement and conclude this side of Hamlet have been cut, Fortinbras's direction:
"Bear Hamlet, like a soldier, to the stage;
For he was likely, had he been put on,
To have proved most royally[.]" 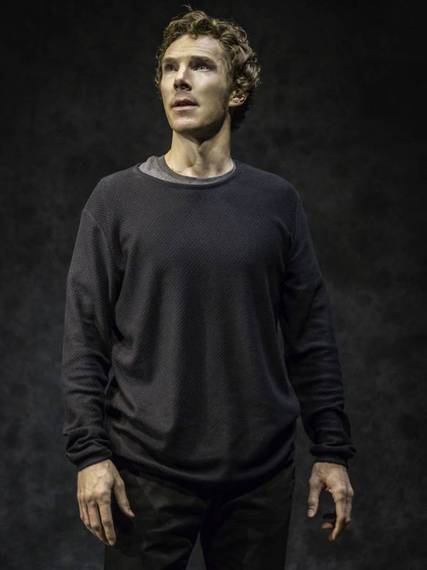 Hamlet has to be cut to be performed in three hours. However, not just eliminating, but changing the words of, Shakespeare's text is rotten. On August 11, ditties became songs; Hamlet found more things in our philosophy, Horatio, not your; Ophelia was sewing in her chamber, not her closet. Hamlet's gleeful welcome to the players is gutted, as his long directorial discourse to the First Player. The lyric pseudo-philosophical line from his letter to Ophelia, "Thine evermore dear lady, whilst this machine is to him, Hamlet" - gone. "It would cost you a groaning to take off my edge" - gone, as were many of the play's sexier lines. (This is not, despite its appealing star, a sexy Hamlet.) Polonius's observations that "beautified Ophelia" is an ill phrase, and that "mobled queen" is good, are gone. Gertrude picks up a cup at the end, and walks around with it -- but gone is that chilling line announcing her present death, "The Queen carouses to thy health, Hamlet." All is left out of joint hereby. The hobby-horse is forgot.

I was so distressed by the language-mangling that I couldn't enjoy the show much at first. My calm friend, film critic Scott Jordan Harris, brought me around at the interval. "It's more cinematic than Olivier's movie of Hamlet," he observed, and he's right. A movie production for a movie star. 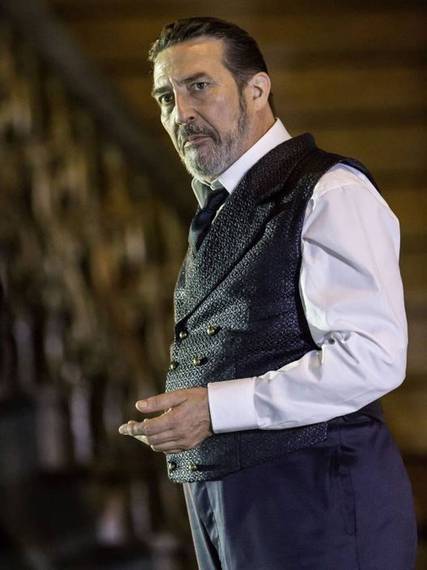 Ciarán Hinds, his large body as graceful and stealthy as a cat's, is Claudius. By the interval, I realized he was redeeming this Hamlet for me. The first half concludes with Hinds standing unmoving as bright light and rubbish blast across him from three sides, and Elsinore begins to crumble around him. With his sneer of cold command slowly giving way to fear and despair, his eyes drowning pools of horror and sorrow, Hinds is spectacular. No wonder the director removes some of Claudius's best lines and gives them to Gertrude. It's a terrible error; but was it deemed necessary to keep Hinds from ruling the show?

The wonderful Jim Norton (of Bishop Brennan fame via Father Ted) is wasted as Polonius. His lines are cut to ribbons, reducing him to a one-dimensional cartoon of the unseen good old man. His relationship with Hamlet, so important for the play's success, is almost entirely eliminated. You lose the wordplays and jokes that show his understanding of the prince, and Hamlet's affection for the man whose daughter he loves. 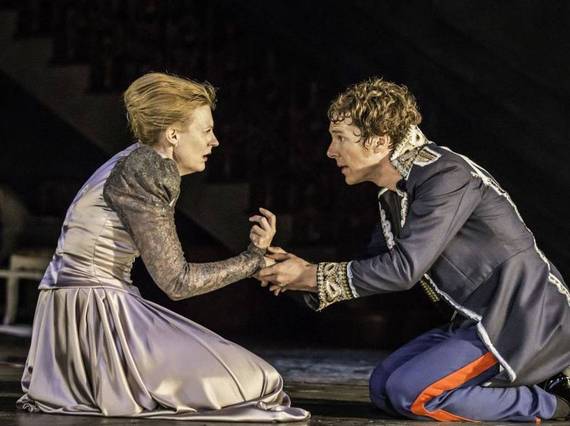 Anastasia Hille, as Gertrude, is only ten years older than Cumberbatch as Hamlet. They look to be about the same age on stage. When Hamlet scolds Gertrude in III.iv, telling her that at her age the blood is tame, the audience laughed. Hille, slumping from the waist and sawing the air with her hands, stood more like a Tennessee Williams matriarch than a woman who's been a queen twice over.

Karl Johnson, doubling the roles of King Hamlet's ghost and the gravedigger, is particularly good as the latter, though he has to prepare Ophelia's grave while Frank Sinatra croons "All Of Me." The two gravediggers' conversation is one of the most reflective moments of the play, and almost the only featuring lowborn everymen rather than courtiers and royalty. To cut it to one man singing along with Frankie, as he lifts out and itemizes body parts, is a dumbed-down game of bones. The scene depends on the back-and-forth between the gravediggers and Hamlet for its humor. Now the humor fails -- though the audience tittered at "Alas, poor Yorick. I knew him, Horatio." It's not a funny line at all, but the sight of Cumberbatch adopting the pose and holding that skull is evidently caviar to the general.

Horatio (Leo Bill) trails through Elsinore in a flannel shirt, carrying a rucksack and looking like a nebbishy survivor, not of the destruction of the Danish royal family, but of a third-rate music festival. Why? There's no reason provided, via his actions or character, for this nobleman and dear friend of Hamlet's becoming something so diminished. Similarly, Ophelia is styled as a photographer and pianist, but we don't know why, and nothing is really done with this. Sian Brooke's performance is keen and fine, in what can be a thankless role for young actresses often reduced to ranting and skipping. (In a brilliant moment, just before Ophelia enters, "distracted," Gertrude comes onstage with her blonde hair askew, barefoot, in a slip - and for one moment you think the two women have entirely shifted character).

Visual moments abound to enrich this Hamlet -- very necessary, where so many words are gone. The use of a full-length portrait of old Hamlet, and a commemorative plate with the face of Claudius, when Hamlet compares the two in III.iv is funny, and an appropriate recognition of the appetites that lead Claudius to crime and punishment. Ophelia, stricken by her father's death, gathers the bloodstained arras just as Hamlet has held his father's coat at the start. As they are seconds from death, Gertrude says to her son, "Come, let me wipe thy face." Cumberbatch shifts his head like a little boy, protesting, and it's one of the most intimate moments in the production. 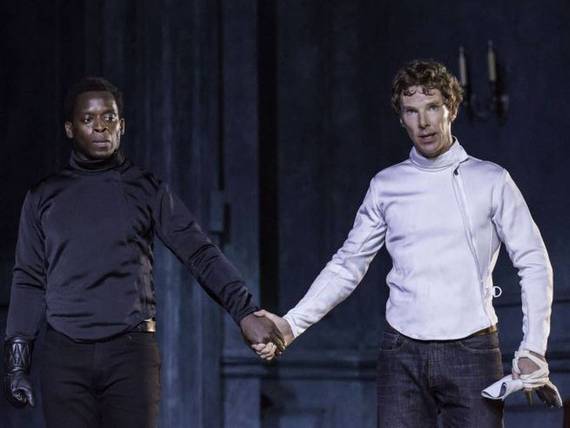 At the end, Cumberbatch stepped forward and applauded the audience: I'd seen the flash of a camera only once (though that was once too many). He well deserved the applause in return. Yet this is the first Hamlet I've ever seen that left me dry-eyed at the end. "Flights of angels sing thee to thy rest" didn't even do it. The rest of our company had reactions as mixed as mine. I went home and couldn't sleep -- haunted by all the things that could have let this evening skyrocket. May the individual excellence of the actors, and the eternally powerful bones of the text, elevate the production, by opening night, to what it should and could be.

*A report of August 19 says that "To be, or not to be" has been restored to its traditional place in Act III, just before Hamlet's "get thee to a nunnery" confrontation with Ophelia -- which it sets up perfectly, and which was sadly amputated and passionless the night we saw the play.