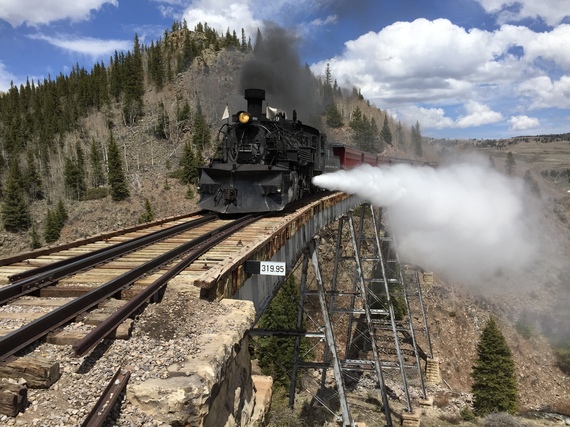 The Cumbres & Toltec Scenic Railroad, the highest, longest and most authentic steam railroad in America, will begin its 46th season on May 28, 2016, with steam locomotives departing daily from Antonito, Colorado and Chama, New Mexico.

It is the only railroad in the world owned jointly by two states -- Colorado and New Mexico. This "Williamsburg on wheels" is an authentic National Historic Landmark that moves, re-creating the experience of traveling by steam railroad in the 1880s over some of the most gorgeous scenery in the Rocky Mountain West. Wyatt Earp, Doc Holliday, Butch Cassidy and every famous (and infamous!) figure of the Old West rode this railroad. Even Indiana Jones used to hop aboard passing trains - at least in the movies. The house used in the film as Indiana Jones' boyhood home is now a B&B in Antonito and you can stay there before riding the train. 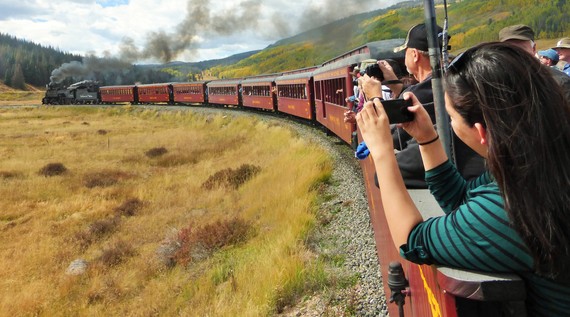 Originally built in 1880, the railroad follows 64-miles of tracks that cross the borders of Colorado and New Mexico 11 times, skirting along canyon walls through Toltec Gorge and climbing to the top of 10,0a5-foot Cumbres Pass, the highest point reached by any steam railroad in North America.

Unlike many 21st Century tourist railroads, the Cumbres & Toltec strives to create an authentic 1880 railroad experience. Passengers may walk through the train, ride in the open air gondola car, open windows, or ride on the platforms between cars. You can expect to get smoke and cinders on you. The train travels at a top speed of 12 mph through deep forests of aspens and pines, across open tundra, on high plains, and through a rocky gorge of unusual geologic formations. There are restrooms on most cars, and each train has a special bar car. You don't think Doc Holliday went all day without a drink, do you? Much like it did in the 1880s, the train stops midway at the Osier station and everyone gets off for a hot lunch of turkey or meatloaf. 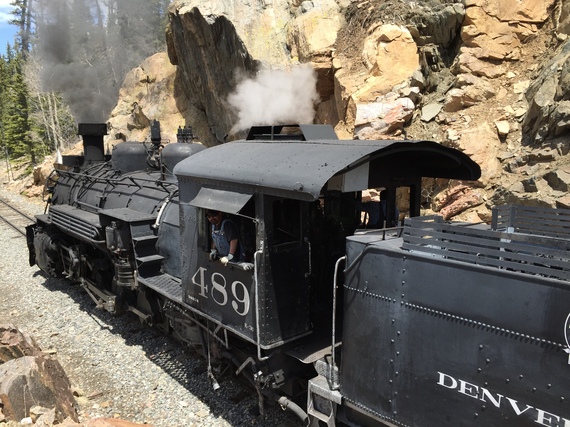 What's the trip like? The excitement begins the moment the train leaves Antonito station, quickly reaching a series of hills to steam over Ferguson's Trestle, named for a man who was hung here. It is the Old West, after all. From here, the route winds around wide curves, going up into the mountains through forests of aspen. Wildlife abounds. Bears, elk, deer, hawks and eagles have all been seen from the train. Most of the route is "off-the-grid" with no cell phone coverage, so families can concentrate on the scenery and the experience. 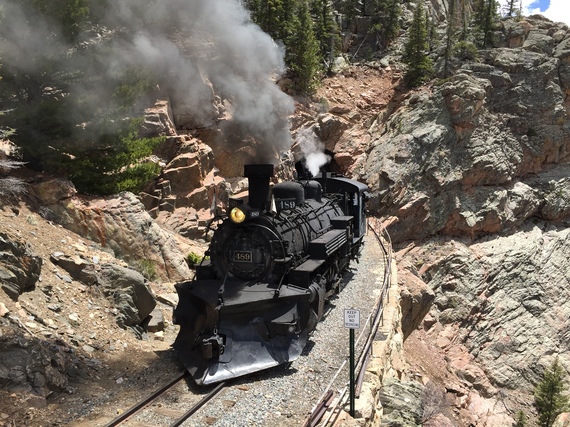 One of the most spectacular parts of the trip starts as the train inches its way along the rim of 800-foot-deep Toltec Gorge. Peer out the train windows. The gorge goes literally straight down to Rio de los Pinos far below.

Leaving the gorge, the locomotive picks up speed and steams to the lunch stop at the old townsite of Osier, Colorado. Past Osier, the train first crosses 137-foot-tall Cascade Creek Trestle, the highest on the line, then snakes around Tanglefoot Curve, a loop so tight that the train seems to almost fold in half, finally reaching Cumbres Pass. At 10,015 feet elevation, it is the highest pass reached by rail in the United States. There are tall conifers and meadows that bloom with wildflowers. As the steep descent begins, sweeping views of the Chama Valley unfold until the train chugs over Lobato Trestle spanning Wolf Creek. The end of the trip, Chama, New Mexico is just ahead. 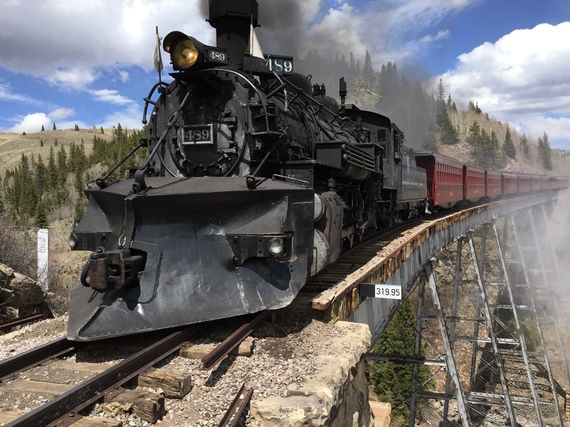 Booking the train is somewhat confusing because they offer so many different choices. Passengers can board daily trains in either Antonito, CO or Chama, NM. They can go the full 64 miles in one direction and return to their starting point (and their cars) by a 40-minute motorcoach ride. Or they can go to the halfway point, enjoy lunch, and return to their car by train. It's even possible to park your car in Antonito or Chama, ride a motorcoach to the other station in the morning, and return to your car by train in the afternoon. Motorcoach rides and lunches are included in all full day ticket prices, which start at $95 for adults. It's especially gorgeous in the fall when the surrounding forests of aspens turn gold. 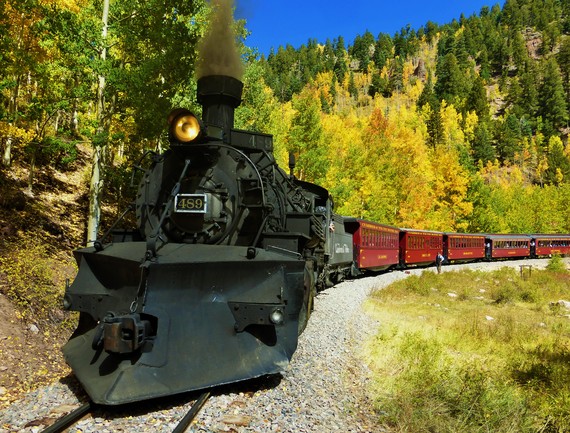