In 2005 during the Avian Flu hysteria, I wrote a column here called "Curb The Avian Flu: Lose the American Handshake". I had just come back from living in India with my family and found myself enthralled with the practice of Namaste -- pressing both palms together and making a bow to greet others in lieu of the handshake. I thought myself clever for the alliteration of "American" and "Avian". Needless to say, the piece got mauled in the comments section by pack of raving right-wing lunatics who claimed I was just like all the rest of the unpatriotic unappreciative American left-wing nut jobs that wrote for the Huffington Post -- then in its infancy. It was one of my first blogs and I was so traumatized that I didn't publish anything for months afterwards.

But, alas, I had a point. With global travel, chronic antibiotic overuse and an ever greater means by which a virus can spread across the globe, why must we touch hands every time we meet or greet someone? The handshake is an obvious vestigal gesture left over from a time when hands needed to be shown free of weapons. It's time to lose the handshake once and for all and embrace Namasté as the new greeting.

Israeli-born Dan Fishel of Columbia University demonstrating the nuances of the American Handshake.

I had never given much thought to the way Westerners greet each other. Grab firmly, pump and look straight in the eye and say hello. Nothing is worse than a limp handshake. In fact, I'll take the fist bump over the handshake any day. I'd rather do pretty much anything else than touch the one part of the body that's touching everything else all day. I used to live in Paris, and I just loved all the kissing. Not super hygienic, but the only way to go if you're going to catch a killer virus.

Before spending time in India, I had, of course, performed the obligatory Namaste in yoga class. I didn't know exactly to whom I was praying but all I knew is that it cleared my mind made my back feel fantastic. When I arrived in India, at first I thought I was getting an elaborate performance of service by the people who worked in the hotel we where we were staying in Delhi. Then I noticed that everyone in the whole continent greeted each other this way: hands pressed together in a praying motion, eyes closed and saying "Namaste".

Before I had become acclimated to the gesture of Namaste in India, I was introduced to a man in Jaipur who wore a beautiful orange turban. "Kimberly meet Anu. Anu meet Kimberly," my friend said. Just as he bowed toward me with his hands together, my right hand instinctually jutted forward and smashed right into the poor man's soloplexis. From then on I made a conscious effort to greet people with a subtle bow and Namaste instead of the handshake. As I did it everywhere I went, I became aware of how my movements affected my attitude. When we came back to the states, I became aware of how aggressive the handshake really is.

I learned that Namaste doesn't really mean Peace as I thought it did. Namaste literally translates to "I bow to the Divine in you" or "The Divine within me honors The Divine within you." What a beautiful way to greet another soul.

With everyone in a panic about the prospect of a flu pandemic upon us, we have a golden opportunity to stop the unnecessary spread of germs, lose the American handshake habit and positively change our attitudes at the same time. Let's change our custom and adopt this better one. So next time you meet someone new, put your hands together and make a little bow. 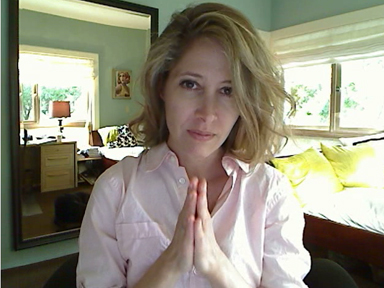 Namaste and A Santé!

First Person Artist is a weekly column by artist Kimberly Brooks in which she provides commentary on the creative process, technology and showcases artists' work from around the world. She has also had it up to here with plastic. Come back every Monday for more Kimberly Brooks.