Hanover, New Hampshire -- On the night of the Iowa primary, I got an email from Larry David: "Obama's victory speech was the first time since middle school that I felt that much pride in being an American....(except for getting my syndication checks!)."

He was so excited, he decided to come to New Hampshire, along with Ari Emanuel, his longtime friend and agent.

Monday night, he headed to Dartmouth College in Hanover to talk about the importance of getting out votes for Obama at two large dorm gatherings.

As we headed toward the first gathering, at the McLaughlin cluster of residence halls, students started running up to him, crying out, "I love you, I love you! I'm your biggest fan!!" Pretty soon there was a long, snaking line following him into the building, prompting one student to say that Larry was "like a Jewish Pied Piper."

And, indeed, the place was packed. So many students showed up that not everyone could fit inside, so they crowded around the doorways, trying to listen in. 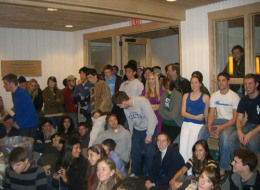 The questions started coming rapid fire. It immediately became clear: these students were high-level aficionados of Larry's work. Some of them were undecided about Obama, but no one was undecided about Curb Your Enthusiasm and Seinfeld.

What followed was unlike any campaign event I've been at. A circular conversation that pinballed between politics and showbiz -- Why are you for Obama? Are you going to get back with Cheryl (his TV wife)? -- and often combined the two, with both Larry and the students riffing on how the '08 race related to moments from Curb or Seinfeld. Alas, the question of "shrinkage" never came up.

Throughout the event Larry was... well, Larry. Completely himself and utterly hilarious. At one point he noticed a student scratching himself and asked, "What are you doing itching your balls at an Obama event?"

Another student asked him what he thought Obama's chances were. He answered with his signature "Pre-tty, pre-tty good," leading to a raucous outburst.

"I'm undecided between Obama and Hillary," one young woman said. "Aren't you tired of the old?" he replied. "Don't you want to put on some clean clothes? Voting for Hillary would be like doing Frasier again on TV. Don't you want something fresh, new and creative?"

"I mean, haven't we had enough with Bushes and Clintons and Bushes?" he continued. "The country needs a shower, a good, long, hot shower. That's what Obama is, a hot shower. So fresh you can smell him. Delicious." 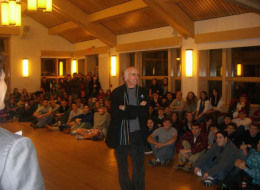 Another student asked him when he first met Obama. "I met him in Martha's Vineyard," he replied, "in the summer of '04. I liked him from the first moment, even though he's a skinny man...not presidential in a bathing suit. And I decided to support him when I first heard him speak at the Democratic Convention."

When asked which Republican he would vote for, if he had to vote Republican, Larry replied: "Candidates who do not believe in evolution are not my cup of tea."

When a young woman said that she was trying to decide whether to vote for Obama or John McCain, Larry took a beat, and pursed his lips. "Let's see," he said, "one was against the war in Iraq from the beginning, and one wants to keep the troops there for another hundred years. I can see your dilemma."

More Curb: How did you cast Leon? "He just came in, I took one look at him and he got the job. He made me laugh." "'I bring the ruckus to the ladies!'" a student called out, quoting Leon. Followups: Who would Leon vote for? "Obama." What would most hurt Obama's chances? "He needs to avoid saying 'Fuck' in his speech and sexual come-ons to women around him. He also needs to avoid going, 'I dunno if I can do this, I'm scared.' Other than that, it'll be alright."

The gathering ended with a question about whether Larry and Cheryl would get back together. Larry asked the group whether they wanted them to -- and was a little surprised when the overwhelming majority said they would. Only a few wanted him to stay with Loretta Black (Viveca A. Fox). And one guy wanted him to swing.

Then it was off to Zimmerman Hall and another lively Q & A.

"I'm not sure if I'll vote for Obama," a student said. "I'm concerned about his lack of experience." "Would it help," said Larry, "if I told you that Lincoln only had two years of experience in Congress before he became president and the times could not have been more turbulent. And did anybody have more experience than Bob Dole, who had been in the Senate for over 25 years when he ran? And how awful would that have been if he had won? Plus, just imagine how the rest of the world will see us the day they wake up to Obama as president."

"What about Giuliani?" asked another student. "He did a good job for you in the low-fat yogurt Seinfeld episode." "Yes, he did," Larry responded, "but he's a lunatic."

"What did she whisper in your ear?" someone asked about the Curb episode featuring Alanis Morissette. "Nothing intelligible," Larry replied. "Originally, it was supposed to be Carly Simon, who was going to reveal to me who "You're So Vain" was about, but she canceled and I had to find an alternative."

Favorite Seinfeld Episodes? "The Contest," "The Marine Biologist," and "The Opposite": "We would have been much better off if President Bush had done the opposite of everything he wanted to do -- on the war, on torture, on shredding up the Constitution."

Which Seinfeld character would he like to see as president? "Newman. Because every time he would give a press conference and walk up to the podium, everyone would say 'Hello, Newman.'"

What would be in an Obama sandwich? "Tomato, lettuce, and sardines." (Regrettably there was no debate on how The Obama would stack up against The Larry David combo of whitefish, sable, capers, onions and cream cheese.)

"Isn't your hair too short?" he suddenly asked one young man. "Do girls like it that short?" "I like it longer and curly," a girl piped in.

"I'm undecided between Obama and Edwards," said another student. "What can you say to convince me?" " If you don't vote for Obama I'm never doing the show again," Larry replied.

I took the kid's name down; it was Zach. So we have someone to blame if Larry never does Curb again. "I wouldn't have been a comedian if my name was Zach," Larry added, and then ended with a sincere pitch for Obama: "Please, please vote for him."