The newest flavor-of-the-month in the nutritional supplement world is curcumin, aka turmeric, that yellow powdery herb used in India for centuries to give savory curry dishes their golden color. Proponents cite exciting research about this powerful antioxidant and anti-inflammatory agent. They claim curcumin in its optimized form is a healthier and more effective alternative to pain medications like Advil, Motrin and prescription drugs. And coming on strong in ongoing research is its role in combating more serious chronic diseases, like cancer, Alzheimer's, and various circulatory and inflammatory disorders. Curcumin's anti-aging properties have also been tracked in lab mice.

The data is intriguing, and as the argument goes, what do we have to lose by trying a centuries-old spice ingredient if even half of these claims are accurate? For example, as Julian Whitaker, MD, the "Oprah" of nutritional health, points out in his latest newsletter, India consumes the bulk of the turmeric produced in the world. Experts cite turmeric consumption as a major factor in preventing cognitive decline. So Dr. Whitaker infers it's not a far-fetched coincidence that India's 1.2 billion population has one-third the rate of Alzheimer's than does the United States (which affects half of Americans over 85).

But in this wave of enthusiasm there is one catch that isn't talked about much. Those who rush out to the market or health food store to buy curcumin capsules and ditch their ibuprofen might be initially disappointed. At fault would not be the substance itself but its modest absorption by the body. Just as certain medicines are given intravenously rather than orally, the standardized curcumin extracts found in most dietary supplements don't fare so well in the human stomach―only a small percentage is absorbed into the bloodstream!

To solve this issue, some manufacturers have added other herbal extracts to slightly improve curcumin's bioavailability. But what Dr. Whitaker and a host of other medical doctors are raving about is a much newer breakthrough that dramatically increases the absorption of curcumin. Italian scientists (at Indena S.p.A.) have successfully gotten curcumin past the gut barrier by attaching it to another more easily absorbed, natural molecule, called phosphatidyl choline, creating what they call a "phytosome." A 2007 study published in the journal Cancer Chemotherapy and Pharmacology demonstrated that rat blood levels of curcumin were significantly higher from consuming curcumin phytosome. In addition, a small, unpublished human study shows twice the absorption of curcumin from phytosome as the rat study. One of these curcumin phytosome products, marketed as Meriva-SR (http://www.meriva-sr.com), is also formulated as a "sustained release" curcumin phytosome to overcome another, less troublesome problem, curcumin's rapid utilization in the body.

In praising the curcumin phytosome product he tried, Meriva-SR, Dr. Whitaker talks glowingly about its effect on the back pain that had previously ruined his golf game. He writes, "Imagine, a supplement that has the pain-relieving power of Advil, Motrin, and even stronger drugs--without any of their negative side effects. Better still, you can take comfort in the fact you are also protecting your brain, reducing your risk of cancer, and quelling inflammation and oxidative stress throughout your body. It just doesn't get much better than that."

Over the last twenty years, Dr. Whitaker was an early proponent and helped pave the way for wide mainstream acceptance of glucosamine, CoQ10, vitamin D, saw palmetto, L-arginine and resveratrol, among others. He explains, "I am a magnet for virtually every innovative nutritional supplement product. Everybody wants me to try things. I don't usually immediately feel any nutritional products, but I definitely noticed the power of this one. Prior to trying Meriva, I was taking other curcumin products every day, but this was the first one that delivered analgesia."

Dr. Whitaker is by no means alone. A number of medical doctors, who as a profession are traditionally skeptical about nutritional supplement claims, have had similar results with curcumin phytosome and are saying so. Dr. Maurice Beer, an internist in private practice in New York City, has seen great benefit for patients with mild to moderate pain: "Patients report that it has a rapid onset of action, usually within 30-45 minutes. They particularly appreciate the absence of side effects combined with its high efficacy. Meriva is my first choice in situations where I may have previously used non-steroidal anti-inflammatory drugs."

Dr. Carol Doroshow, a pediatrician in Seattle and a victim of significant back pain for years, is now taking it preventively. "Like a lot of adults, I can get pretty stiff and uncomfortable in my lower back when I sit for a long time. I tried the product first at a two and a half day medical conference and was pain free the whole time and continue to be so."

With such bottom line results, curcumin phytosome dietary supplements may soon graduate from "flavor of the month" and become as indispensable to our daily health regime as turmeric is to India's fabulous cuisine. 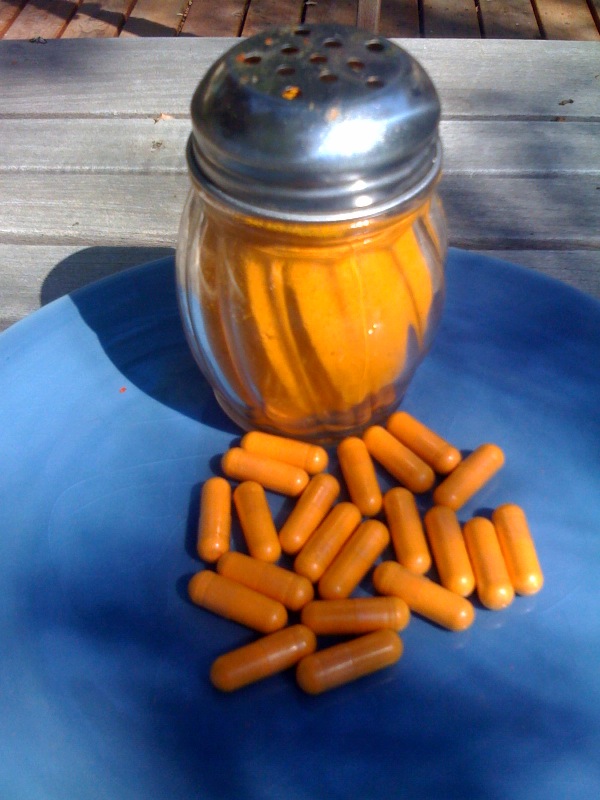 Voting Made Easy
Register to vote and apply for an absentee ballot today
Register now
More:
healthy livingHealthanti-inflammatoryadviltumeric
Newsletter Sign Up
The essential guide to taking care of your mind and body
Subscribe to HuffPost’s wellness email
Successfully Subscribed!
Wellness delivered to your inbox