In 2014, researchers discovered that facioscapulohumeral muscular dystrophy (FSHD) affects more individuals than previously thought. This disease causes a progressive loss of all skeletal muscle, where weakness is usually noticeable across facial, back and upper arm muscles. The prevalence of this rare and incurable disease, FSHD, is now 1 in 8,333 people. This means FSHD affects about 870,000 individuals worldwide, though the actual number of individuals with the disease could be significantly higher due to undiagnosed cases. For this reason, I am taking part in the FSH Society's new campaign to raise awareness for FSHD.

I have experienced FSHD firsthand, with both my mother and grandmother diagnosed. It was heartbreaking to watch their struggle to complete simple, everyday tasks that many people take for granted. Although FSHD has been such a huge part of my own life, I have realized that there is a lack of awareness about the disease in the general public, which is why the FSH Society and I launched the #CureFSHD social campaign.

#CureFSHD captures the many faces of FSHD and the impact the disease has on their lives. To help us drive the campaign to reach as many audiences as possible, we are introducing an Ambassador Program. The program brings representatives in the FSHD community together to increase public awareness for the disease. Here are some of the brave faces of FSHD. 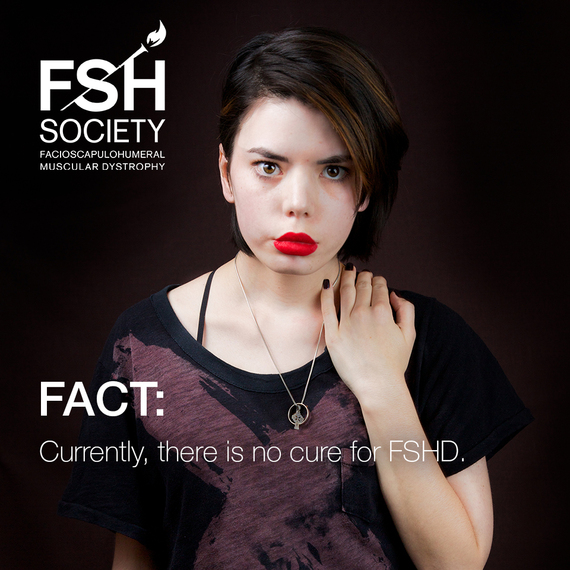 Carden Wyckoff is a 22-year-old college student from Athens, Georgia studying biological and environmental science. She was diagnosed with FSHD when she was eight years old. Carden has made it her mission to fight for the rights of disabled individuals on her college campus and beyond. She says that she has challenging days when she wishes she didn't have a degenerative condition so she could freely walk up stairs or run. Knowing she will eventually lose abilities makes her grateful for what she still has. She says, "I accepted early on at 14 that I have to make the most of what I have until it is gone... literally, and the majority of the people on the planet cannot say that for themselves."

Kristin Duquette, a recent graduate from Trinity College in Hartford, Connecticut, was diagnosed with FSHD at age nine and must rely on a scooter or wheelchair to get around. Swimming is one of her greatest passions, and with much determination and support, Kirstin became a five-time American Record Holder and a three-time Junior National Record Holder. Some of her other incredible accomplishments include her participation in CAF's San Diego Triathlon Challenge since 2008, and competing in CAF's Half Ironman open ocean swim in 2010. Kristin has also founded a disability empowerment college program called "A Day in a Wheelchair," which promotes disability rights as human rights. Her accomplishments have been an inspiration to many, including Carlos Romero.

Carlos Romero, a competitive rock climber, was diagnosed with FSHD in recent years and has dramatically changed his lifestyle since. At the age of 27, he realized that his weight was out of control as a product of poor lifestyle choices and was experiencing symptoms, such as severe back pain, that he thought were related to his weight. At the age of 28, Carlos was diagnosed with FSHD. He turned his life around by dieting and training, which resulted in his losing 230 pounds over the past two and half years. Carlos took up rock climbing as an almost perverse challenge because his disease leaves him unable to raise his arms above shoulder level. He had to invent new techniques in order to pull himself up a wall. Since then, he has won second place at the 2014 ABS Bouldering National Championships and won first place at the 2014 ParaClimbing National Championships. He is also currently ranked 11th in the ParaClimbing World Championships. With all of these amazing accomplishments, it's hard to believe that anything could get in Carlos' way.

Ryan Levinson was diagnosed with FSHD in 1996. When Ryan was first told the news, doctors recommended that he stop all athletic activities. This was hard news for the athlete to swallow as one of his many passions included sailing. His strong will led him and his wife Nicole to embark on a trip sailing across the Pacific Ocean. He made numerous adaptations to the boat's equipment so that he and Nicole would be able to weather storms and survive thousands of miles from shore. They left the coast of San Diego this December. Ryan feels that this sailing excursion is a way for him to draw connections to both mental and physical challenges as he looks to gain a new perspective and to live life to the fullest with FSHD. Ryan says, "Muscular dystrophy is something I might have, but it doesn't define who I am."

If you're inspired by the stories of these patients, help us raise awareness about FSHD and move towards our ultimate goal of finding a cure. Please take a moment to share one these photos on social media using the hashtag #CureFSHD to spread the word about the facts behind the disease.