Inky was our cat. He was a jet-black American Shorthair we adopted as a kitten from a flea-infested house with seven other animals. We actually thought he was a she for the first six or so months that we had him.

My eighteen-month-old daughter loves cats, and that's all thanks to Inky. She calls them "kees" and her face lights up like a Christmas tree whenever she sees one, even if it's just a picture or a cartoon. Whenever Inky would emerge from hiding to purr at our feet or stake a claim on our laps, Kairi would drop whatever toy she'd been playing with and go to him, hugging and kissing and petting him. Usually he tolerated her; occasionally, when he was in a particularly good mood, he would crane his neck upward and kiss her on the nose. 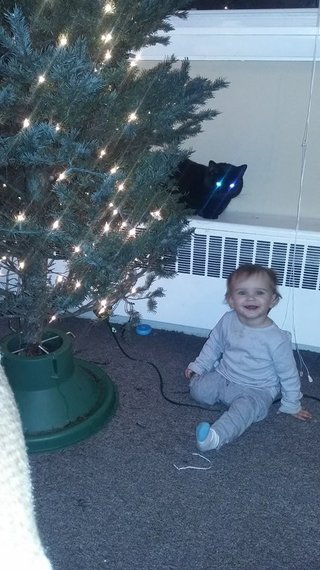 My wife and I got him almost right after our marriage as a sort of training wheels for having a child. I wanted a dog, but we couldn't afford it. So we got Inky instead, and I never knew how much I could love a cat until I met him.

Which is why it pains me to say that we lost him, simply because we couldn't afford basic veterinary care. He was only three years old.

I took him in the middle of the night to an emergency animal hospital because all the vets were closed. He wasn't moving, he was moaning in pain, and we'd found him asleep in his litter box. Not good signs.

He had an obstruction somewhere in his bladder causing it to engorge and his kidneys to begin to fail. This had all happened in less than a day. In the middle of the night, with no regular vets open, we had a choice: spend hundreds (if not thousands) of dollars for expensive tests and treatments, or let him go.

We explored every option. Maybe we could get away with not doing these tests, or maybe clearing the obstruction would be enough. The vet warned me that without treating the underlying cause, the chances were extremely high he would just get sick again in as little as a day.

We applied for a line of credit to help stagger the costs. That, at least, we could have done. We were denied, because I have an incredible amount of student debt on my credit history.

The whole time, Inky was collapsed on the table in front of me, moaning in pain.

So we lost him, because we didn't have $500 to drop on emergency medical care, and we couldn't bear the thought of giving him a most-likely temporary fix, only to have him end up miserable and in pain again, this time with no recourse whatsoever.

We got to say goodbye. My baby daughter smiled when they brought him in, just like she always does. She had no understanding of what was about to happen. She said his name - "Ickey" is how she pronounces it - and went to hug him. We had to hold her back because he was in too much pain.

We pet him and kissed him and said our goodbyes, and held him while the vet administered the shot. Kairi waved goodbye to him at the end, probably thinking she'd see him when we got home.

Even the vet cried.

Somebody in the comments is already typing that it's my own fault for not working hard enough to afford my pet - that's fine. Actually, my family is just starting to do better. We'd been on food stamps for almost the entirety of 2015, and this year, we were able to get off of them when I started working. That, of course, presented its own problems - now a larger chunk of the money we make goes to basic food costs, which means we still aren't saving much. We also both work now, which means we take turns with our daughter so the occasion is rare when the three of us spend any time together.

We scrape by, little by little -- until something like this happens.

Someone else is wondering why this is such a big deal, when there are PEOPLE, actual HUMAN BEINGS, who die every day because they cannot access healthcare.

Well, that's exactly the point. This is my story. This is what happened to me. I'm acutely aware that there are hundreds of thousands of people who have stories that are far, far worse. People turned away for having a pre-existing condition before the ACA, people who stop treatment because they can't afford medical bills, people who ignore symptoms because a doctor visit is too expensive, and people who can't afford the medication that would save their lives die every single day in America and around the world.

This is wrong. This is not the world my daughter deserves, a world where her first and best friend dies because her parents don't have a few hundred extra bucks lying around (an amount that is literally nothing to some people). A world where an animal hospital can't give a struggling family a break because of the predatory lending practices of some banks.

We do not deserve a world where a life is only worth as much as some company can make saving it.

I'm not a communist, and I'm not looking for a Robin Hood to steal from the wealthy and give to me. I don't deserve to drive a luxury car or vacation in the Bahamas without earning it.

But I also don't deserve to lose my beloved cat because I'm too poor to afford medical care.

Inky was my daughter's first and best friend. They should have grown up together, well into her teens. Now she won't even remember him.

I am going to fight this system until the day I die. For Kairi, and for Inky. 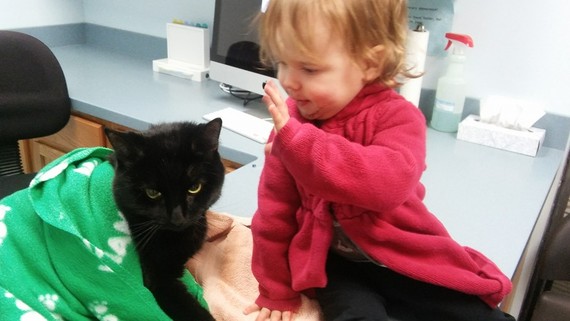