Sunsets on Earth can be some of the most beautiful and breathtaking natural phenomena to watch and photograph. But the view isn't bad from the red planet, either.

This sequence of images was taken by NASA's Curiosity rover on April 15 over a span of almost seven minutes. This was the first time the rover captured a Martian sunset in color. The images are color-calibrated and Curiosity's Mast Camera actually captures colors like humans would see them. But it is "a little less sensitive to blue than people are," according to NASA.

The photos were taken after a dust storm, while the fine particles were still suspended in the atmosphere.

"The colors come from the fact that the very fine dust is the right size so that blue light penetrates the atmosphere slightly more efficiently," Mark Lemmon of Texas A&M University, said in a news release.

"When the blue light scatters off the dust, it stays closer to the direction of the sun than light of other colors does," added Lemmon, a member of the Curiosity science-team. "The rest of the sky is yellow to orange, as yellow and red light scatter all over the sky instead of being absorbed or staying close to the sun." 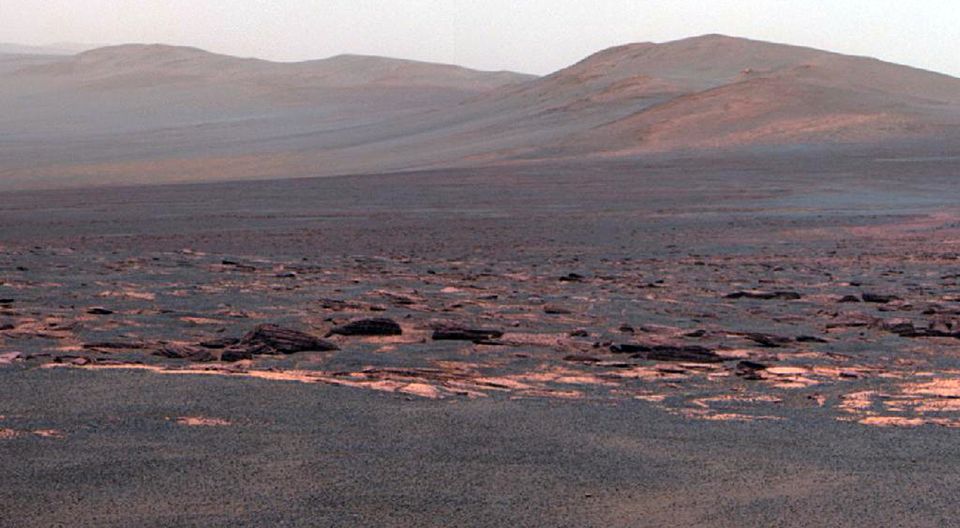 1 / 10
This Aug. 9, 2011 image provided by NASA shows a view from the Mars Rover Opportunity from the Western rim of the Endeavour Crater.
AP