NASA's Mars rover Curiosity reached out and touched a Martian rock with its huge robotic arm for the first time, then took off on its longest Red Planet drive to date.

Curiosity spent the past several days investigating a strange pyramid-shaped stone named "Jake Matijevic," testing out some of the gear at the end of its 7-foot-long (2.1 meters) arm. These tools include the Alpha Particle X-Ray Spectrometer (APXS), which measures elemental composition, and the Mars Hand Lens Imager close-up camera, or MAHLI.

The rover performed these initial "contact science" operations on Saturday and Sunday (Sept. 22 and 23), researchers said. Photos snapped on those days show Curiosity's arm sidled up against "Jake Matijevic," with the arm's turret obscuring most of the 16-inch-tall (25 centimeters) rock.

Curiosity also zapped "Jake Matijevic" with the laser on its ChemCam instrument, which reads rock composition from the vaporized bits. Comparing the results should help cross-calibrate the two instruments, researchers said. 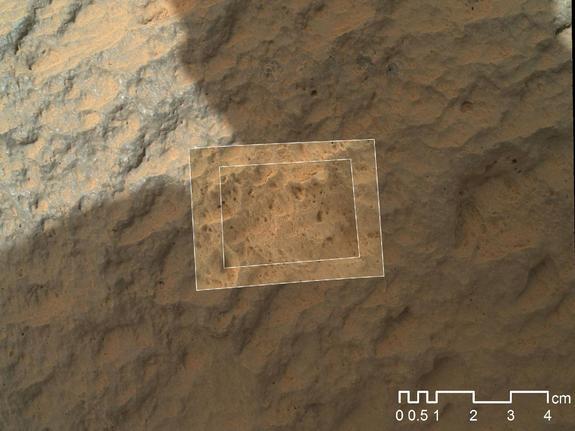 This image combines photographs taken by the Mars Hand Lens Imager (MAHLI) at three different distances from the first Martian rock that NASA's Curiosity rover touched with its arm.

The ChemCam work wrapped up Monday (Sept. 24), at which point Curiosity embarked on a 138-foot (42 m) drive — the longest one-day jaunt for the rover since it landed inside Mars' Gale Crater on the night of Aug. 5.

Curiosity is making its way toward a site called Glenelg, which lies 1,300 feet (400 m) from the rover's touchdown site. Before Monday's drive, the mission team had said Curiosity was about halfway to Glenelg.

Scientists will likely soon begin looking for sandy areas to try out Curiosity's scooping system for the first time. The arm will deposit bits of Martian soil into the analytical instruments on the rover's body, which are known as SAM (Sample Analysis at Mars) and CheMin (short for Chemistry & Mineralogy).

The first use of Curiosity's rock-boring drill, which also sits at the end of the rover's arm, will come sometime after that, researchers have said.

While team members are keen to see what Curiosity discovers at Glenelg, the $2.5 billion rover's main destination is the base of Mount Sharp. This odd mountain rises 3.4 miles (5.5 km) into the Red Planet sky from Gale Crater's center, and its foothills show signs of long-ago exposure to liquid water.

Those foothills lie about 6 miles (10 km) away from Curiosity's landing site. The rover — whose main task is to determine if the Gale area could ever have supported microbial life — may be ready to turn its wheels toward the interesting deposits near the end of the year, scientists have said.

The rock "Jake Matijevic" takes its name from Curiosity's surface operations systems chief engineer, who died Aug. 20 at the age of 64. Matijevic, who was based at NASA's Jet Propulsion Laboratory in Pasadena, Calif., also worked on all three previous Mars rovers — Sojourner, Spirit and Opportunity — NASA officials said.