During the past two weeks, we have witnessed two exciting events in space science. First, there were the spectacular images and spectra that NASA's New Horizons mission has taken of the dwarf planet Pluto (Figure 1). Second, the discovery that the planet Kepler 452b and its host star form the closest analogue to date to the Earth-Sun system (Figure 2) has generated great interest. The planet in this system is only somewhat larger than the Earth, and it orbits a Sun-like star in the Habitable Zone -- that "Goldilocks" range of distances that allows for liquid water to exist on the surface of a rocky planet. Unfortunately, because of its large distance from Earth, Kepler 452b does not allow for follow-up observations. However, the Transiting Exoplanet Survey Satellite (TESS; to be launched in 2017) is expected to find a few relatively nearby planets in the Habitable Zone of their parent stars, and those would be suitable targets for the James Webb Space Telescope (JWST; to be launched in 2018), to characterize their atmospheres. 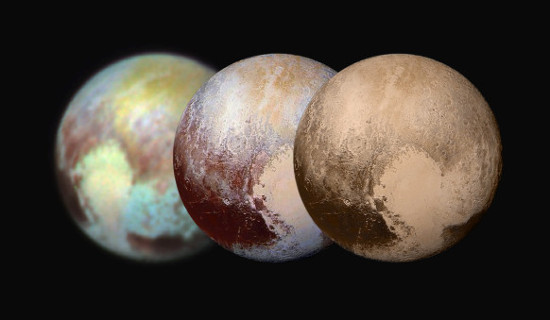 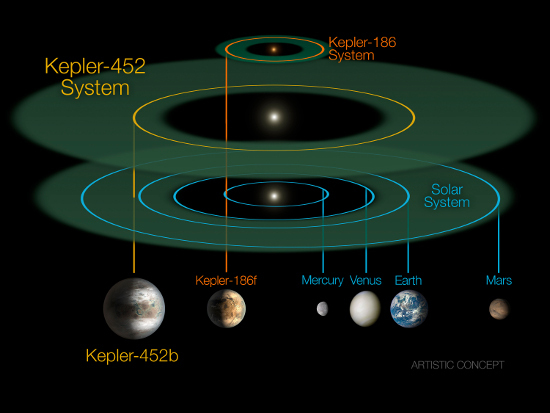 You may ask: how does any one of these discoveries affect my everyday life? And the simple answer is that in terms of immediately perceptible ways, it doesn't. So why do so many of us still find these events so fascinating? Because we are an insatiably curious species!

We wanted to know what Pluto looks like not only because we thought that unveiling its structure will give us clues about the formation of the Solar System, but also because for decades we have considered it to be the most remote planet in the Solar System, and we were curious to know if it looks more like the Moon or like Mars.

Similarly, we are feverishly looking for an Earth twin -- "Earth 2.0" -- because we think that finding it may get us one step closer to answering what is arguably the most intriguing of all current scientific questions: Are we alone? Or, as physicist Enrico Fermi famously wondered, if our Galaxy is teeming with intelligent civilizations, why haven't we seen any evidence for that yet?

Mathematician and philosopher Bertrand Russell once wrote that: "Philosophy is to be studied not for the sake of any definite answers to its questions... but rather for the sake of the questions themselves." He stopped short, however, of discussing why we come up with those questions in the first place.

Why do we keep asking "why?" It is that characteristic, after all, that is one of the keys to what makes us human. Incidentally, a paper published just last week in the journal Current Biology, claims to have identified the area in the brain that distinguishes humans from macaque monkeys -- in terms of their ability to respond to abstract information -- another uniquely human capability.

There is no doubt that curiosity will continue to drive science, exploration, literature, and art. Every answer to a scientific question only opens the door to an entire series of new questions. Every work of literature or art only evokes emotions that inspire us to dig deeper.

They say that curiosity is contagious. Let's turn it into an epidemic!