I've been fascinated by quantum physics since I was five. I have even written here about my enchantment with Bell's Theorem (see the article here). My mother brought me over to the large oak table in our home in Ann Arbor, Michigan. On it, she had spread out some papers by Erwin Schrödinger, the Nobel-Prize winning Austrian physicist responsible for some of quantum theory's core principles. 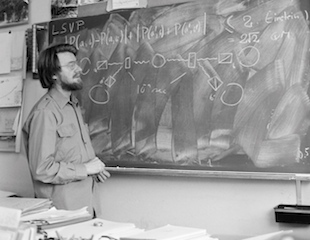 "This is the intellectual tradition you come from," my mother declared, "all the top quantum physicists used to come to Ann Arbor every summer to attend the Summer School in Theoretical Physics."

"Why don't they come anymore?" I asked.

"Because they developed a bomb which killed hundreds of thousands of people in Japan at the end of World War II. After that Ann Arbor refused to have anything to do with quantum physics for many years," she replied.

I was shocked. A bomb had been developed in our hometown that had killed so many people so far away?

"It's your duty to do whatever you can to prevent nuclear war," she added sternly.

I didn't fully grasp all she had said, but I nodded somberly.

What I took away from this conversation with my brilliant mother--who was a beloved special education teacher in Michigan for thirty years--is the same thing I hope you will consider: It's important for every citizen to have a basic understanding of quantum physics so we can all help prevent nuclear war, and so we also understand the fantastic benefits this remarkable discipline has to offer humanity.

Quantum physics (also called quantum theory and quantum mechanics) studies the behavior of matter at the nanoscopic level. It looks at how atomic and subatomic particles behave. What quantum physicists discovered is that in this super-tiny world, Newton's laws of physics no longer apply.

In Isaac Newton's physics all matter was perceived as "continuous." In other words, a rock was smoothly and consistently a rock all the way through. Quantum physicists discovered that matter is actually made up of nanoscopically small "lumps." They noticed that light is not actually absorbed by matter in a smooth continuous fashion, but rather in segments. It's as if you're driving down the freeway but you can only accelerate in multiples of 10 miles an hour, as physicist James Kakalios explains in his wonderful book The Amazing Story of Quantum Mechanics.

Quantum physicists have observed fascinating behavior on this level that has revolutionized our understanding of our world and led to new technologies we use every day. Without quantum mechanics there would be no personal computers, no lasers, no CDs or Blu-ray players!

If you want a mostly math-free exploration of quantum physics, I highly recommend Kakalios's book. But if you're eager to challenge yourself and delve into the subject, I recommended you read my favorite 10 physics articles. 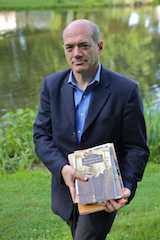 Author at ISAW with a few of these papers (source: Ricardo Andres)

Here are the first five. Stay tuned for Part II of this article, which will list the next five!

1. "On the Law of Energy Distribution in the Normal Spectrum" (Annalen der Physik, 1901) by Max Planck. Planck was a German theoretical physicist who originated quantum theory. He won the Nobel Prize in Physics in 1918. This article revolutionized human understanding of how atoms and subatomic particles behave. 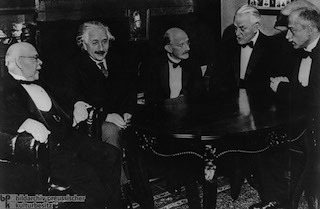 Planck at center with other Nobel Prize winners (source)

2. "On the Motion of Small Particles Suspended in a Stationary Liquid, as Required by the Molecular Kinetic Theory of Heat" (Annalen der Physik, 1905) by Albert Einstein. In this paper, Einstein explained how Brownian motion occurs. Brownian motion was named for botanist Robert Brown, who noticed through his microscope in 1827 that pollen particles in water were randomly moving. He couldn't figure it out, but Einstein theorized that this motion results from the collision of the particles with the atoms that comprise the liquid. Einstein developed a mathematical model called "particle theory" to describe these random movements. Brownian motion was verified experimentally by Jean Perrin in 1908, who won the Nobel Prize in Physics in 1926.

3. "On the Electrodynamics of Moving Bodies" (Annalen der Physik, 1905) by Einstein. Also written during Einstein's Annus Mirabilis or "miracle year," 1905, when he published four genius works that laid the theoretical foundation of quantum physics. In this paper, Einstein detailed his theory of special relativity, which enabled scientists to better understand movement at the speed of light. It remains the most accurate model we have for motion because it replaced the idea that time and space could be defined separately with the new idea--since verified by experiments--that they are interdependent on a space-time continuum. 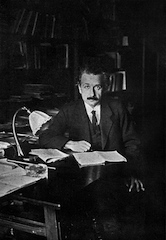 4. "Does the Inertia of a Body Depend Upon Its Energy Content?" (Annalen der Physick, 1905) by Einstein. Here, Einstein lays out the world's most famous equation: E = mc2 . He explains that mass (m) and kinetic energy (E) are equal, because the speed of light (c2) is constant. In other words, mass can be changed into energy and energy can be changed into mass. This is how nuclear energy is produced by nuclear fission. The nuclei of atoms (uranium atoms, typically) are split by shooting neutrons at them, and this destruction of their mass releases energy. 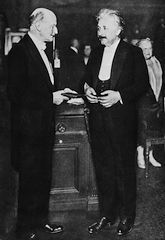 5. In 1912, Einstein produced his General Theory of Relativity. Reading this paper requires first-year calculus and physics, but it's worth a look simply because it's so incredibly important. In it, Einstein proved Newton's concept of space and time as absolute realities measurable by fixed parameters was false. These parameters are actually perceptions and are, therefore, dependent upon (or relative to) whoever is doing the perceiving.

These pioneering papers have led directly to such discoveries as black holes and, of course, nuclear weapons and energy--and we've only scratched the surface.