For the second year in a row, Urban Ecology Professor Stephen A. Goldsmith took a group of students from the University of Utah on a study tour to Curitiba. This trip included a lively conversation with the celebrated urbanist and former mayor of Curitiba and governor of Parana, Jaime Lerner, in his office. This is number three in a series of articles about Curitiba. 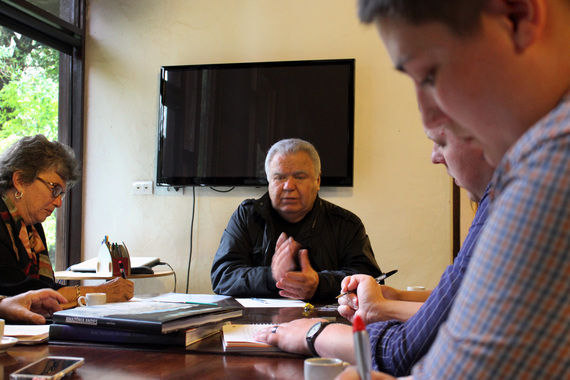 "Over my dead body" is how renowned former Curitiba mayor Jaime Lerner responds to a question about the proposed subway for this Brazilian city, internationally famous for inventing the Bus Rapid Transit system under his leadership in the 1970s. The seriousness of his admonition is not lost behind the laugh of this short, rotund man with a mischievous grin.

The Bus Rapid Transit system here, the most innovative public transit model since the invention of the first railroad, has been adopted in 126 cities around the globe because of its four-decade success in Curitiba. Quick to create, usually 100 times cheaper to operate than an underground subway system and a proven way to shape the growth of a city sustainably, the BRT, as created and managed in Curitiba, is as close to a perfect urban transit system as one can imagine.
So it is nothing short of astonishing to visit this city not far from the Atlantic coast south of Sao Paolo and discover a serious proposal to replace the central stem of this BRT system with an underground subway simply because the original BRT line is considered old after 40 years. "This would destroy the city's whole system," says Lerner, noting that it all connects from this central spine. "The subway is proposed by big lobbies, big enterprise lobbies," Lerner charges, adding that it makes no operational or financial sense. However, the state this week released 5 billion reais (US $2.5 billion) for transportation projects in Curitiba, $1.8 billion reais for the subway.

Since the first line -- the one targeted for substitution by a subway -- was installed in 1974 under Lerner's leadership, the BRT system for this city of 1.7 million has never stopped expanding. It now covers the city with five main lines and dozens of connector lines at a fare of $2.70 Rial (US $1.21). An additional north/south line is currently under construction on the median of an old highway that will include bike lanes and native plants.

In a wide-ranging conversation in his Curitiba office last week, Lerner spoke with humor and considerable insight into the many innovations this city is known for around the world. This modest but functional and totally contemporary building was designed as his family's first home. Years later, he and his wife and kids moved into an apartment across the street "because my wife wanted a view of the city," he says, the house became his office. 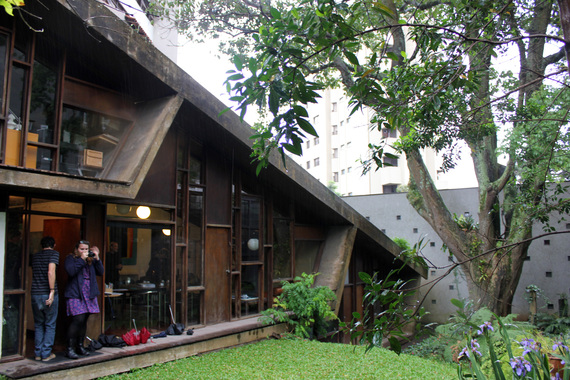 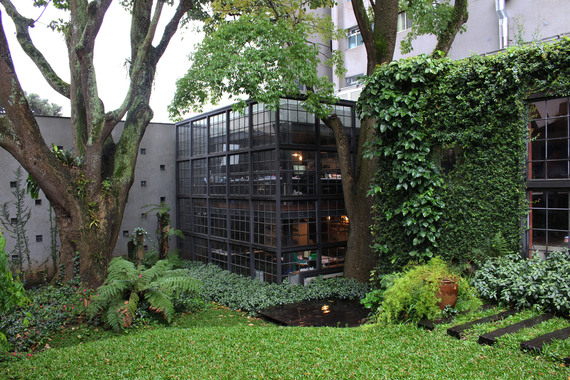 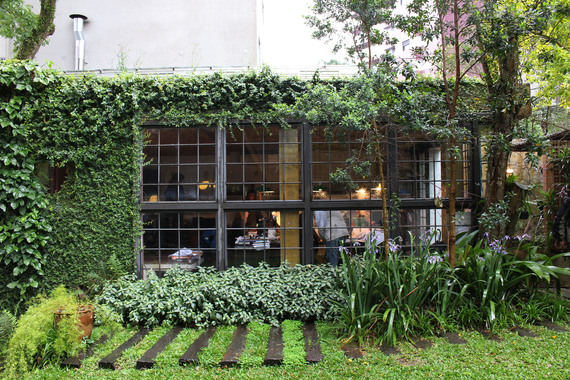 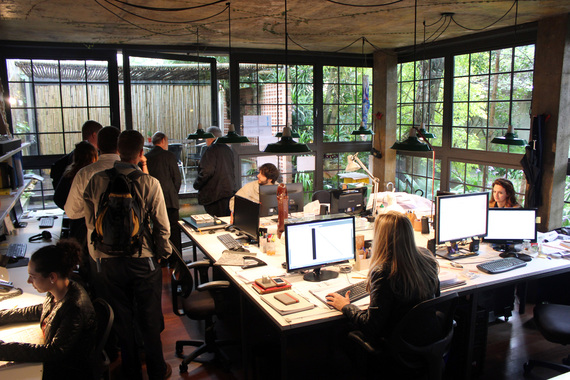 As one looks around at this artful structure of glass, wood, steel and cement, built into a green, urban landscape around a huge tree, one recognizes the brilliantly creative mind from which sprang an endless series of urban innovations when Lerner was still in college, starting with the design of the house at the age of 22. And because the BRT in particular still works so well, Lerner is clearly aggravated by a subway proposal that could destabilize it after 40 years of success. In the Curitiba Metropolitan area that includes 13 cities, 73 percent of the population depends on the Integrated Transportation System which includes the BRT and other buses. The system is so well used and the city has grown along the routes so steadily that overcrowding is causing considerable public outrage. 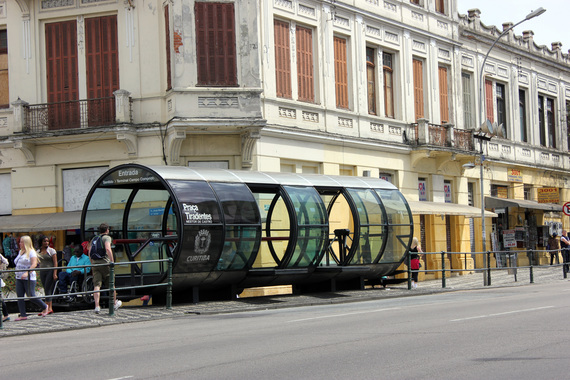 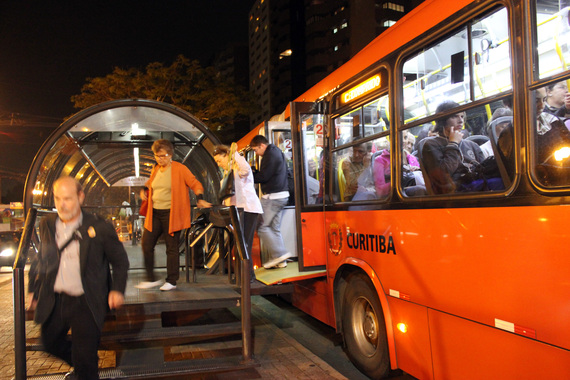 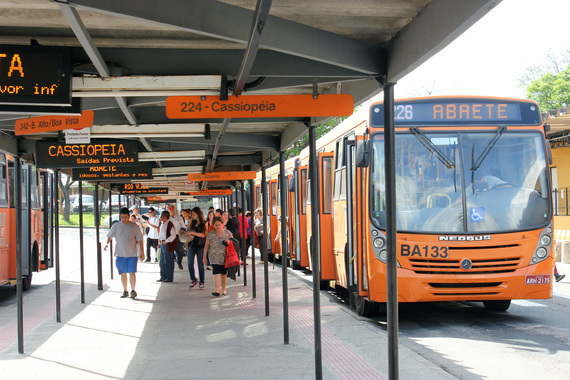 "I met with the new mayor," Lerner says with a smile. "I showed him how he can expand the current system by building above an old railroad line. It would be an "interborough connector" and provide access to the airport for $1 billion instead of the subway at $4 to 5 billion that won't solve anything. In fact, during subway construction, he notes, "the whole system won't work with that line out of commission."

At which point Lerner simply smiles again and says with quiet emphasis: "Over my dead body."

Officials from everywhere come to study the BRT system and to learn how it was done so quickly, cost effectively and maintains a low-cost fare. "It is not a question of money," Lerner insists. Lerner repeats a favorite adage: "If you want creativity, take one zero off your budget; if you want sustainability, take two zeroes off your budget."

In the case of the BRT, Lerner says, "we did not have the $300 million needed at the time for a new fleet of buses. So we told the different companies, 'you buy the fleet, we will pay you by kilometer and we will invest in the infrastructure of the route." The city sets the fare, provides a small subsidy along with the state, and the multiple companies throughout the system make a profit. The fare is 2.70 reais

But there is a deeper, philosophically more important core message to Lerner's wisdom. "When we began to study the idea of transit," he explains, "we decided we had to not work with transportation engineers. They only know how to study origins and destinations. Transit is not an 'expertise.' It is part of the whole system that makes up the city. The worst thing is to have a good technology with no common sense."

Lerner and his colleagues at the time understood that four essentials were needed for a transit system: Quick boarding (fare is paid before boarding), dedicated lanes (cars can't slow buses down), a one-minute headway and priority for buses at traffic lights (they go green as bus approaches). "Three hundred people on one bus," Lerner says simply, "should have priority over one car."

With the urgency today of climate change, Lerner observes, this transportation alternative is more critical than ever. "It is not enough to have green buildings, sustainable materials and recycling. If we understand that 75 percent of all emissions are related to cities and half of those are related to the car, transit has to be the better alternative."

Lerner's approach to urbanism has aspects familiar to innovative urban activists today. But his activism started in the mid-1960s, at the same time as his mentor, author/activist Jane Jacobs was resisting urban renewal and highway building through cities. This was the beginning of the time of the "worship of the car," he says, when he and a group of college friends began a movement to resist the expansion of roads through the city of Curitiba to accommodate automobile traffic.

"All they wanted to do was widen roads," he recalls, "so we started a movement to resist this." As a result of their pressure, the city came up with a master plan in 1966 that called for public transit, an important step for Lerner to build on when he became mayor for the first time in 1971 And began a series of urban initiatives that are beacons of innovation for cities of the world wrestling with the challenges that Lerner took on early.

But the bus system has deteriorated during the last several years, a victim of its own popularity but also of the failure by recent leaders to expand routes as promised, repair crumbling roads, relieve the overcrowding and fight crime. Green-minded laws fashioned to reduce car traffic and pollution, a big problem here, have perversely ended up, fueled by the TransMilenio's woes, encouraging more Bogotans to get second cars and buy motorcycles.

Sadly, warning signs in Curitiba point to possible diminishment of the system. A once-steep tax on automobiles has been lessened, followed by a surge in car sales and downtown traffic. Owning and driving a car is becoming more and more a status symbol. The buses are often overcrowded, causing citizen protests. These problems could mushroom, if not addressed.

Janette Sadik-Khan, who has achieved her share of transforming New York City with hundreds of miles of bike lanes, many new rapid bus lines and scores of new plazas, is a long admirer of Curitiba's accomplishments and Lerner's pioneering initiatives. But she cautions that these gains can be too easily lost. Curitiba's system, she says, "is a jewel of an idea that could come undone."

The crowded buses and increase in traffic congestion are warning signals that hopefully will be heeded. City officials and transit leaders in particular seem committed to keep things on track and an expansion of the system is, in fact, currently underway. And if Lerner has anything to say about it, Curitiba will not be sidetracked by the erroneous allure of a big project subway.

It is a mistake to think of Lerner's genius limited to the initiation of the BRT. Granted that in Curitiba, most people live within a 15 minute walk to public transit. Granted that new development is not approved unless within that 15 minute radius of an existing line or the creation of a new spur. Granted there are 81 km of dedicated lanes, many terminals for transfers, a downtown circular line, a dedicated tourist bus, special lines for students (paid for by the education department), people with disabilities and hospital connections.

But Lerner instituted a number of novel programs including: Turning the main traffic artery of the city into a pedestrian only street in three days; using fisherman instead of multi-million international grants to clean up the city's bays; turning abandoned quarries into spectacular park and educational attractions; locating libraries near schools and within walking distance for all the city's children.

Some of these stories will be explored in upcoming columns.