Confined to a motorized chair, Curtis Kile, who has cerebral palsy, thinks marijuana should be legal for all.

The 52-year-old pointed his wheels from Taylor, Mich. toward 1600 Pennsylvania Avenue on June 14, a 520-mile trek. He says he's hoping to make his pitch in person to President Barack Obama at the White House on July 4.

His 17-year-old son, Curtis Kile, Jr., is accompanying him for the 20-day trek in a Ford Econoline van. Kile Sr. is following the path led by his own father, Charles Curtis Kile, Jr., whom Kile said founded the United Marijuana Smokers of Michigan and once walked from Michigan to the White House in support of marijuana legalization. 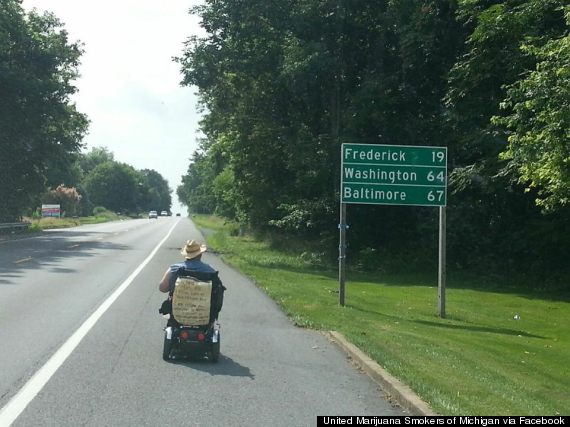 While Kile said his health and pace have been affected by the hot temperatures, he has vowed to press on.

“I intend to get a national movement going so it (marijuana) can just be legalized," he told The Compassion Chronicles. "We have to make it readily available to those who cannot afford it.“

Michigan voters approved medical marijuana use for some chronic medical conditions in 2008. But acceptance has been stymied on multiple fronts. The Huffington Post reported last year that government administration of the program was months behind schedule. In a decision handed down in February, the state's Supreme Court voted 4-1 to shut down marijuana dispensaries and bar licensed patients from purchasing marijuana from each other.

Kile told the Detroit Free Press that lobbyists and rival industries, not common sense, have stymied access to marijuana for people who could benefit from it.

“The alcohol industry doesn’t want it legal, and the pharmaceutical and the tobacco companies don’t want that, because it’s going to bite into their profits," he told the Free Press. "It’s the money that’s stopping it, and that’s wrong."

He's asked President Obama to greet him when he arrives on July 4, writing, "I like the fact that you have an open door policy when it comes to inviting citizens to the White House that have innovative ideas that can help get the United States on the right track again." (sic)

Obama, traveling in Africa until July 2, has yet to respond.

But the inaugural "Cannabis Roll," as he calls it, has received a warm welcome (and even some donations) from people he's encountered en route to Washington D.C.

Whether he'll get a chance to address the President is anybody's guess.