Years ago, I cooked for one of the richest men in the world. He had been a catering client who then asked me to come to work for him full time as his private chef. His peeps offered me a big bag of money, health benefits, and even stock options in his company. He was a commodities broker. Almost never left his home, did all his trading from his bedroom desk, and lived in his pajamas.

After a week of working there, I knew that all the Lord had given him was money. He didn't have looks, personality, taste, or kindness. The day he sunbathed naked outside the kitchen window, I swear there was printing on the window that read "Objects may appear disappointingly smaller in direct sunlight."

At the time, I was trying to sell my first cookbook. Working for "Mr. Oh-So-Rich" made it easier for me to eat. I would write in the morning, and cook at his house in the afternoon. Often I was testing the recipes I wanted to include in my cookbook. He paid for the groceries and gave me honest feedback.

I was able to buy the best of everything and his team of gardeners even put in an entire organic vegetable garden for me. My unlimited food budget, ocean-view kitchen, and the fact that I hardly ever saw him made it a dream job. But there are always strings. And I never see them coming, I only feel the first tug.

It turned out that "Mr. Oh-So-Rich" loved Thanksgiving dinner. Really, really loved Thanksgiving dinner. The entire spread: Turkey, gravy, pies, potatoes, yams, and stuffing. He could eat it every week. When his secretary started calling me at noon every Monday with, "He'd like a full turkey dinner for dinner tonight. Okay, bye, bye." There were the strings... tied right to my bag of money. He tugged the strings and I roasted the turkeys.

The first surprise turkey dinner was a small disaster. Turkeys are frozen in July, and trying to thaw one and cook it in less than five hours was more than I could accomplish. I had all the side dishes and a pie but no turkey. The following week I bought the biggest chicken I could find and stuffed it. I put the sides in small casserole dishes to make the chicken look bigger but "Mr. Oh-So-Rich" was smarter than he looked. He knew it was a chicken.

By week three, I had the butcher take a turkey out of the freezer on Friday and thaw it out for me in his walk-in over the weekend. With 5 hours to shop, drive and cook, I almost made it. So dinner was just a little late... I was so close.

I was talking to the turkey (yes, I was a bit stressed), and setting the timer for my fourth week of Thanksgiving dinner (we're now into August). I thought to myself, "If I cut this sucker up into 8 parts like a chicken and roast them on top of the dressing, and get rid of that heat-sucking cavity, I can probably cut the cooking time in half if not more!" Desperation is the mother of genius.

For the year I remained at that job, I had the butcher cut a turkey into 8 parts every week. He did it on the band saw in the back of the butcher shop. Not only did the turkey parts cook faster and the drippings go directly into the stuffing, I never worried that some parts were more cooked than others. If the breast finished cooking first, I removed it. Turkey perfection became my moniker; the butcher my new best friend.

I can't cook a turkey without thinking about "Mr. Oh-So-Rich". I actually grew fond of him after a year of cooking for him, but when he remarried, I decided to leave. I was scared off when I heard his fiancée believed in coffee enemas. I saw my future: "Decaf or regular, Madame?" and decided there was only so much coffee I could brew.

I'll be cooking a ham this Thanksgiving.

Below is a "before and after" of a 15-pound turkey we cut and cooked at 350 degrees for one hour and fifteen minutes. It was moist and delicious. 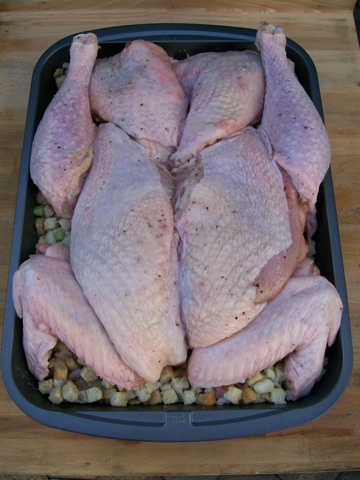 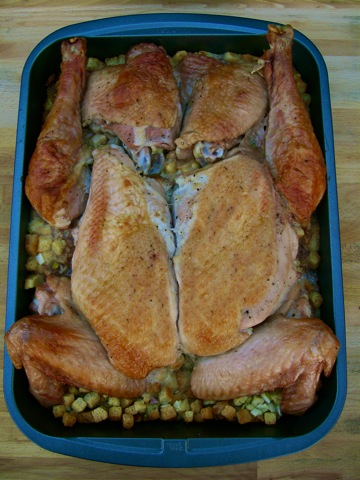 Denise Vivaldo loves to cook. All of her books are on sale at Amazon.com.