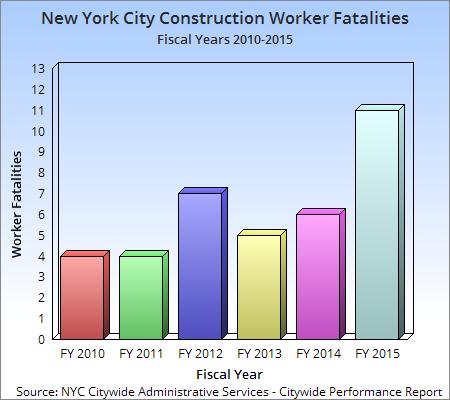 That deadly sum exceeds New York City construction fatalities in all recent years and is up 83 percent over FY2014 and 120 percent since FY2013 (the city's fiscal calendar runs July 1 - June 30), representing the highest total since the current construction expansion began in 2008. While construction is a huge economic engine for New York City, it accounts for less than 4 percent of all New York State employment, yet an astounding 20 percent of all of the state's on-the-job deaths.

What's more, the Mayor's Management Report has identified that with hundreds of serious construction related accidents, injuries increased 34 percent in FY 2015, up 51 percent from both FY2013 and FY2012. So what is the cause of this and how can it be rectified?

Two trends are leading the increase. One is the obvious surge of new construction New York City has encountered, as the Department of Buildings issued 52,618 residential building permits in FY2015, up 156 percent from FY2014 and up a staggering 749 percent from FY2010.

The second is that data from the Occupational Safety and Health Administration (OSHA) shows that nonunion worksites also accounted for 75 percent of construction fatalities in 2014 and 72 percent between 2012-2013.

On August 5, two construction companies, their foreman and senior superintendent were indicted on criminal charges for a worker's death at yet another nonunion worksite, for ignoring repeated safety warnings from City inspectors.

That was the very same day the New York City Construction Fraud Task Force was announced by the Manhattan District Attorney, Cyrus Vance Jr. together with leaders of the city's Department of Investigation and Business Integrity Commission, the Port Authority and MTA's Offices of the Inspector General, to investigate, combat and shine a brighter spotlight on lax construction site safety and worker abuses by general contractors and developers.

These criminal indictments, along with the serious concerns by each of these prosecutorial watchdogs signal further crackdowns may be coming to shed light on contracting firms willing to cut corners and take risks with worker and public safety.

This also serves as a wake-up call that regulators, the courts and government officials are now identifying that serious construction accidents and work site negligence very often cost taxpayers dearly in the pocketbook.

When serious construction accidents occur, it's the taxpayers who have to pay for first responders, law enforcement and investigators sent to the scene. There is also recognition that uninsured workers' hospital and disability costs often have to be borne by New York taxpayers. With the volume of serious work site accidents and fatalities growing so significantly, it's an unmistakable drain on municipal budgets.

The U.S. Labor Department estimates that employers cover only 21 percent of lost wages and medical bills for occupational injuries and illnesses, while employees, their families and their private health insurance pay most of the bill out of pocket (63 percent), and subsidized government programs cover 16 percent according to the recent report, "Adding Inequality to Injury: The Costs of Failing to Protect Workers on the Job."

Height-related falls account for nearly half of the construction deaths in New York. However, when companies skimp on safety and training of their workforce, accidents 20 or 40 stories above street level also imperils pedestrians. From 2009 to 2014, nine innocent lives were lost as result of tools and construction materials falling from work sites, according to the NY City Buildings Department.

The economic impact of the civil litigation and stop work orders that follow have cost developers and general contractors tens-of-millions-of-dollars, and significantly delayed the completion of projects while causing severe harm to their reputation.

As far too many developers and general contractors continue circumventing safety regulations that endanger New York City construction workers and the public at-large, the now considerable power of the Construction Fraud Task Force is looking to remove the economic incentive for those currently cheating the system.

While no business should be begrudged for wanting to make a profit, gambling with the health, safety and future income of workers is simply unacceptable. At the end of the day, every worker should have the capability to put in a hard day's work, and then return safely to their family.